Posted by Imperial Harvest on 02 October 2020

Millions of visitors flock to the Temple of Heaven in Beijing every year, drawn by its mystery, mystique and magnificence. Larger than the Forbidden City, the vast Temple of Heaven is still the largest building in Beijing, and known as the home of Imperial Feng Shui.

In this article, we celebrate the 600th anniversary of the Temple of Heaven with the release of the All-New Bliss of Harvest Jadeite Rings.

Our story begins at Mount Tai or Taishan (泰山), regarded as the preeminent mountain of the Five Sacred Mountains of China. 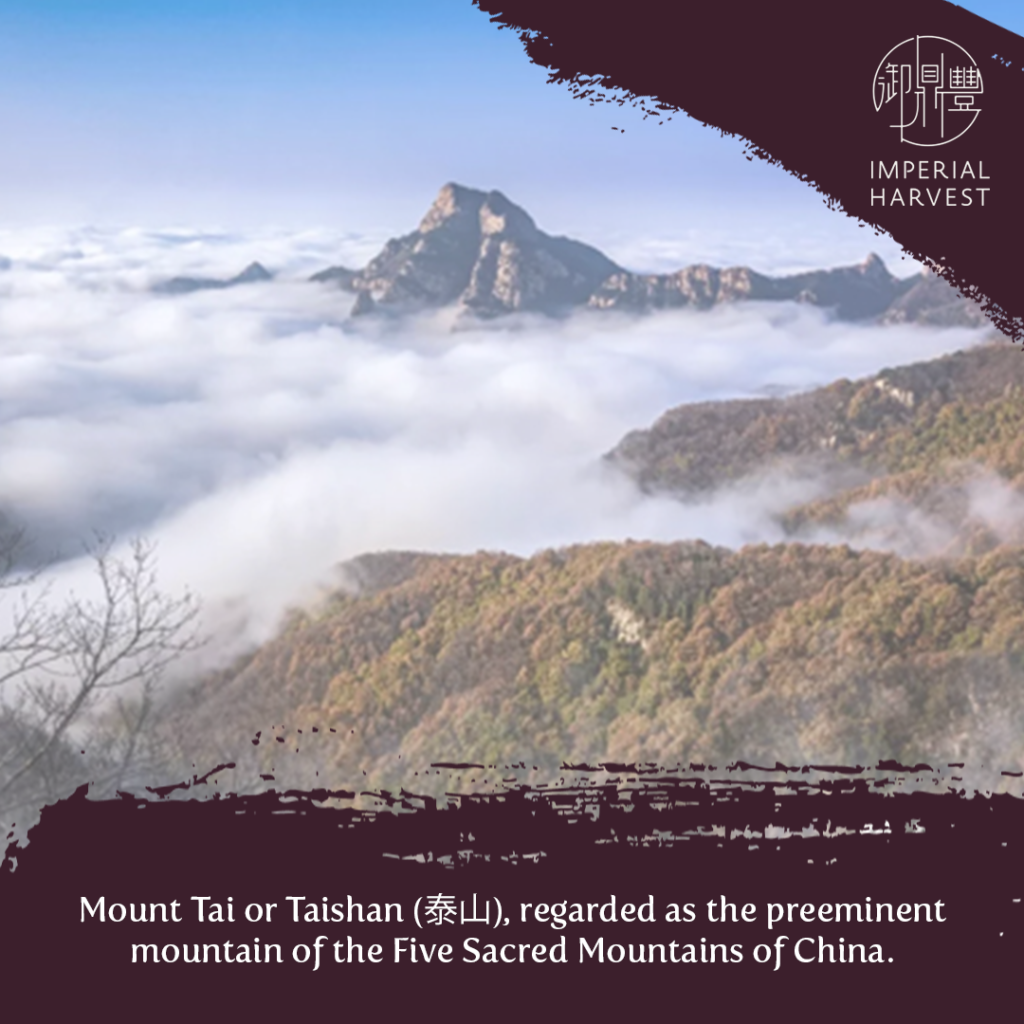 As early as the Shang dynasty more than 3,000 years ago, successive emperors have visited the mountain to pray for peace and prosperity. In those days, Taishan was the only altar for the worship of Heaven and Earth made through costly and elaborate sacrificial rituals on the summit and foot of the mountain respectively. These became known collectively as the Fengshan (封禪) sacrifices. 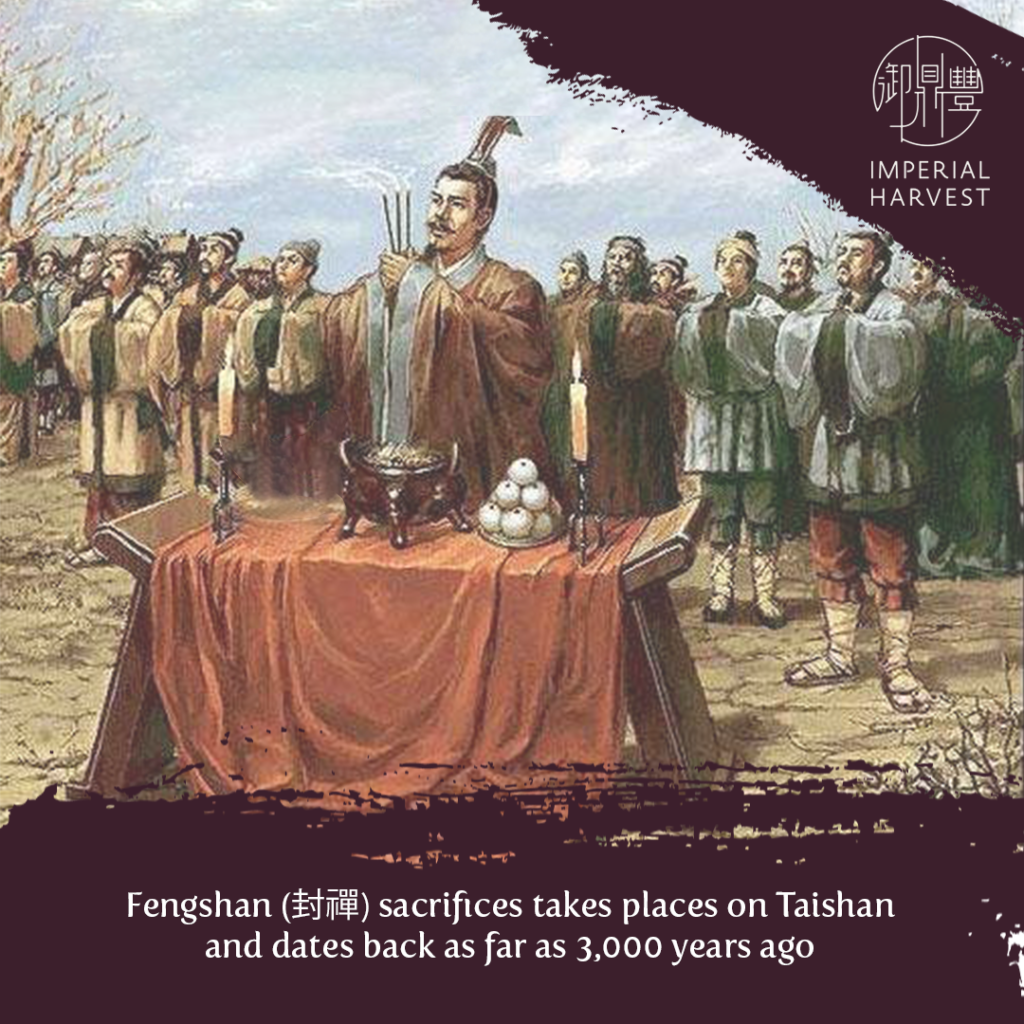 Such was the spiritual and cultural importance of Taishan that many emperors chose to be enthroned here or to mark important occasions. For example, Qin Shi Huang (秦始皇), the first Emperor of China, proclaimed the unity of his empire in a sacred ceremony on the summit, the Jade Emperor Peak. 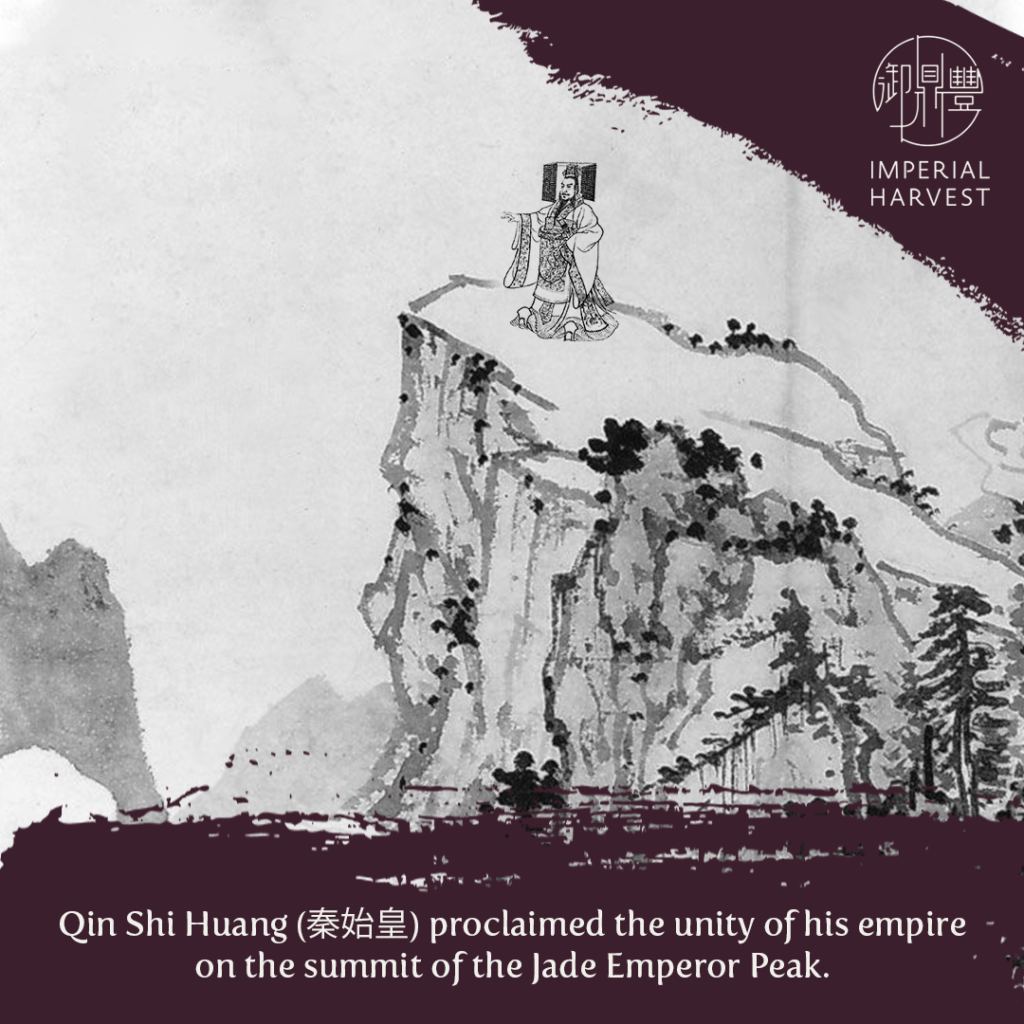 A new spiritual home in Beijing

When the Yongle (meaning “perpetual happiness”) Emperor of the Ming Dynasty established Beijing as his capital and power base, an entire city had to be constructed over 13 years by hundreds of thousands of workers. Included in the ambitious plans were the Forbidden City (the centre of Imperial power) and the Temple of Heaven (天坛 – the centre of spiritual power).

Even as Taishan continued to be regarded as the birthplace of Heaven-Earth worship, it was symbolically transported to the Temple of Heaven and set within the East Heaven Gate as the Seven Star Stone. This was a group of seven carved stones symbolising the seven peaks of Taishan. 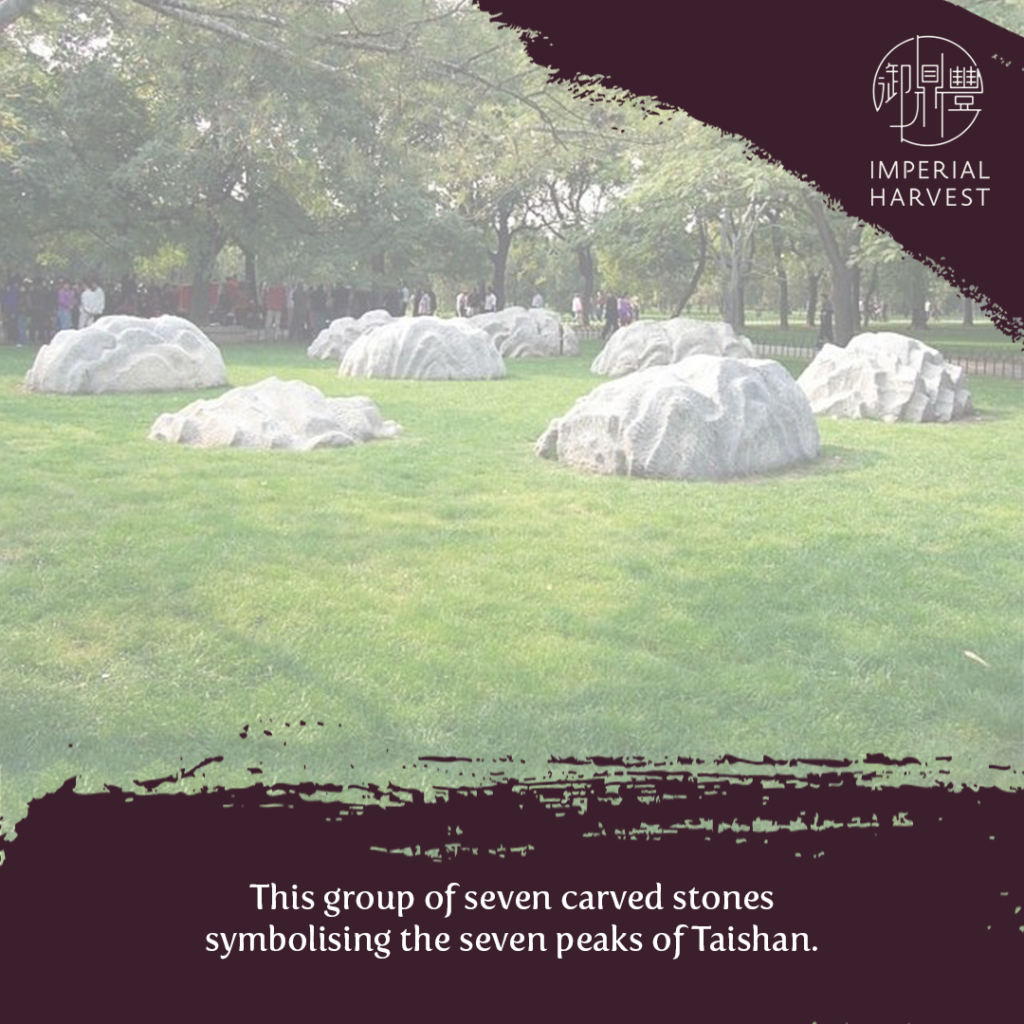 The embodiment of Imperial Feng Shui

Given the sacred importance of the Temple of Heaven (天坛), it was meticulously planned, designed, and constructed according to rigorous Imperial Feng Shui principles. By drawing on divine power, the sovereign power of the Emperor can be protected and magnified.

In accordance with the Confucian Records of Rites, the Temple of Heaven was constructed in the southern suburb of the capital based on principles of Yin and Yang, Heavenly stems and Earthly Branches. This was further supported by Zhouyi (the Book of Changes – the ancient manual for divination) which also prescribed a southern location to benefit from the Yang force of the universe.

The southern suburb of Beijing was considered the location of Yang. Using the 24 mountain compass, the South-1 direction corresponds to the Bing Fire (丙火) of the ten Heavenly Stems where all elements of Yang concentrate, making it the optimal spot for the construction of Temple of Heaven. 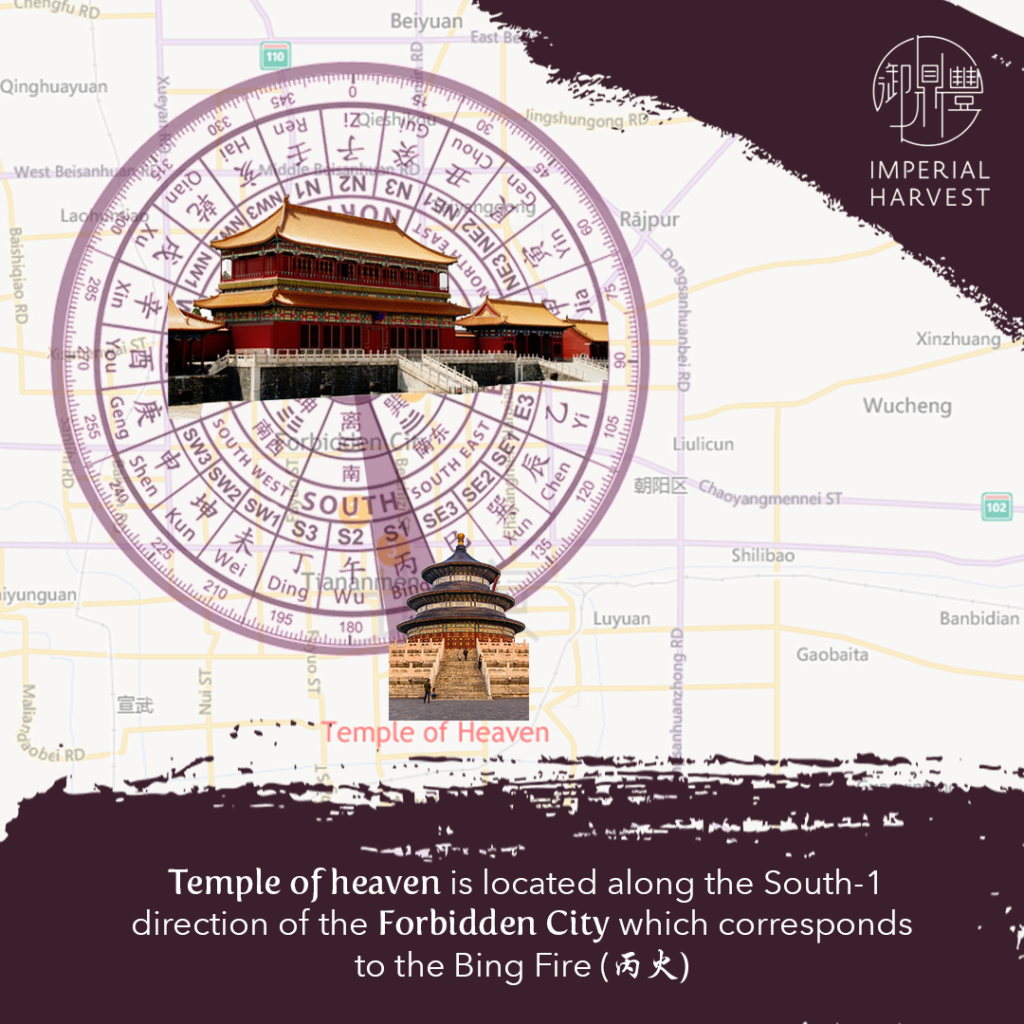 This is why the Temple of Heaven is situated just east of the famous central North-South axis of Beijing, along which are Tiananmen, the Forbidden City, the Drum Tower, and the Bell Tower.

The idea of a circle representing Heaven and a square representing Earth is represented throughout the Temple of Heaven. For example, the northern wall forms a semicircle, and the other three walls enclose a square. Major buildings have perfectly circular ground plans, and are situated in square yards.

The Bliss of Harvest ring is arguably our most iconic collection, paying homage to the famous Hall of Prayer for Good Harvests in the Temple of Heaven. It exemplifies the historic links between Imperial Harvest and our imperial Feng Shui traditions. 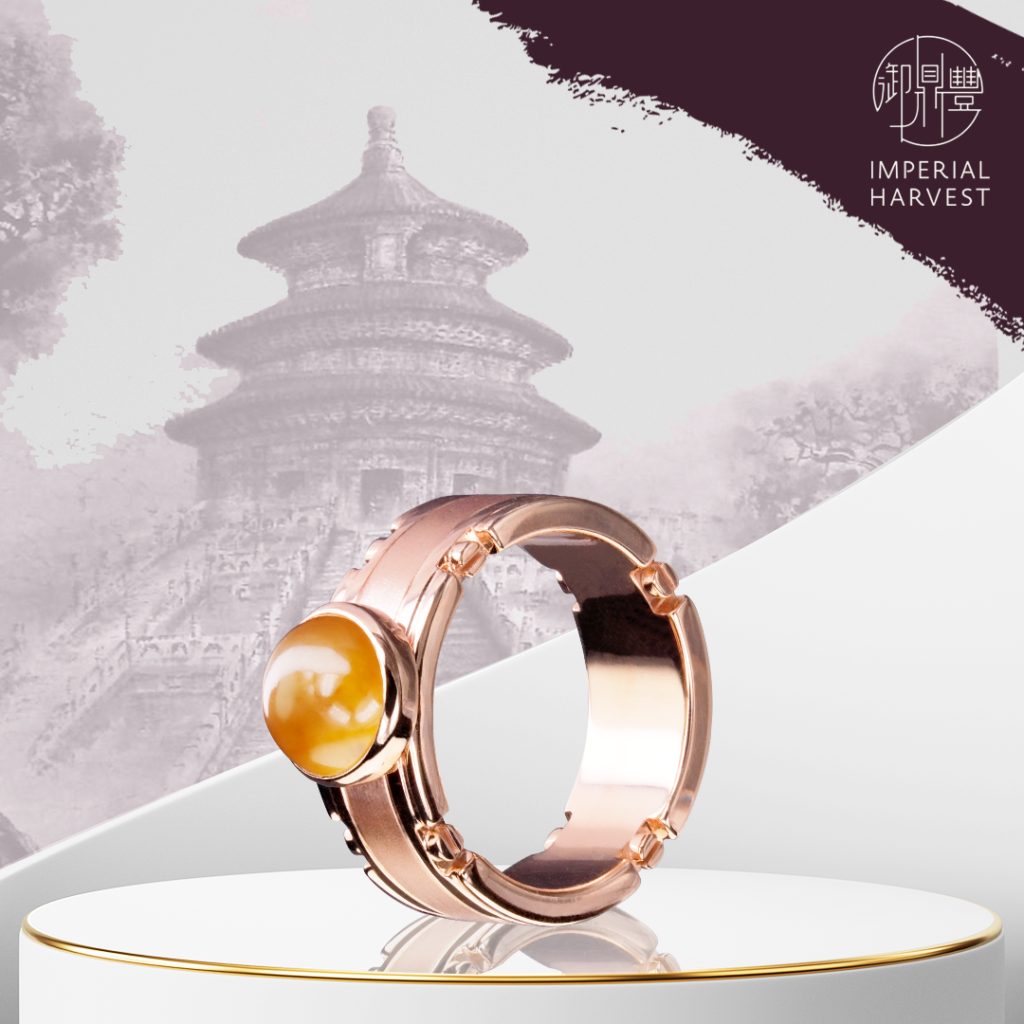 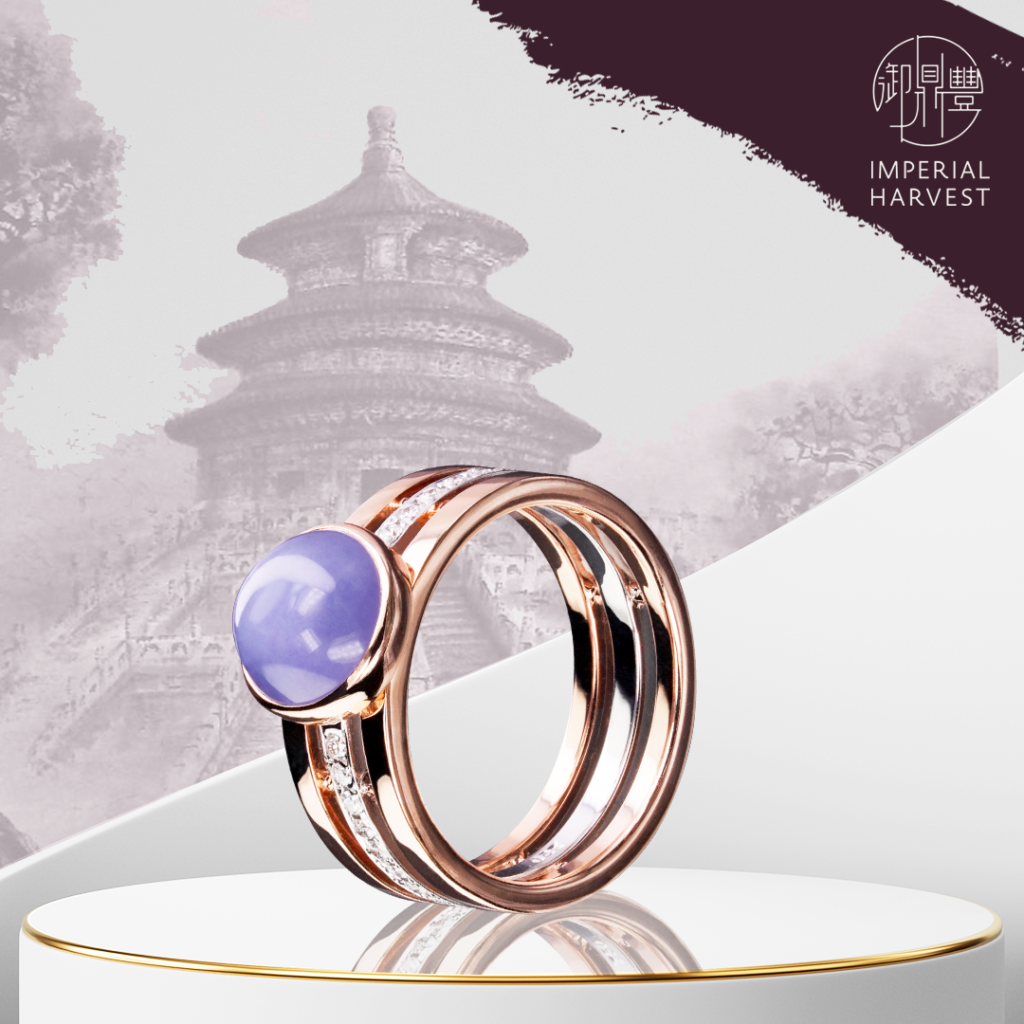 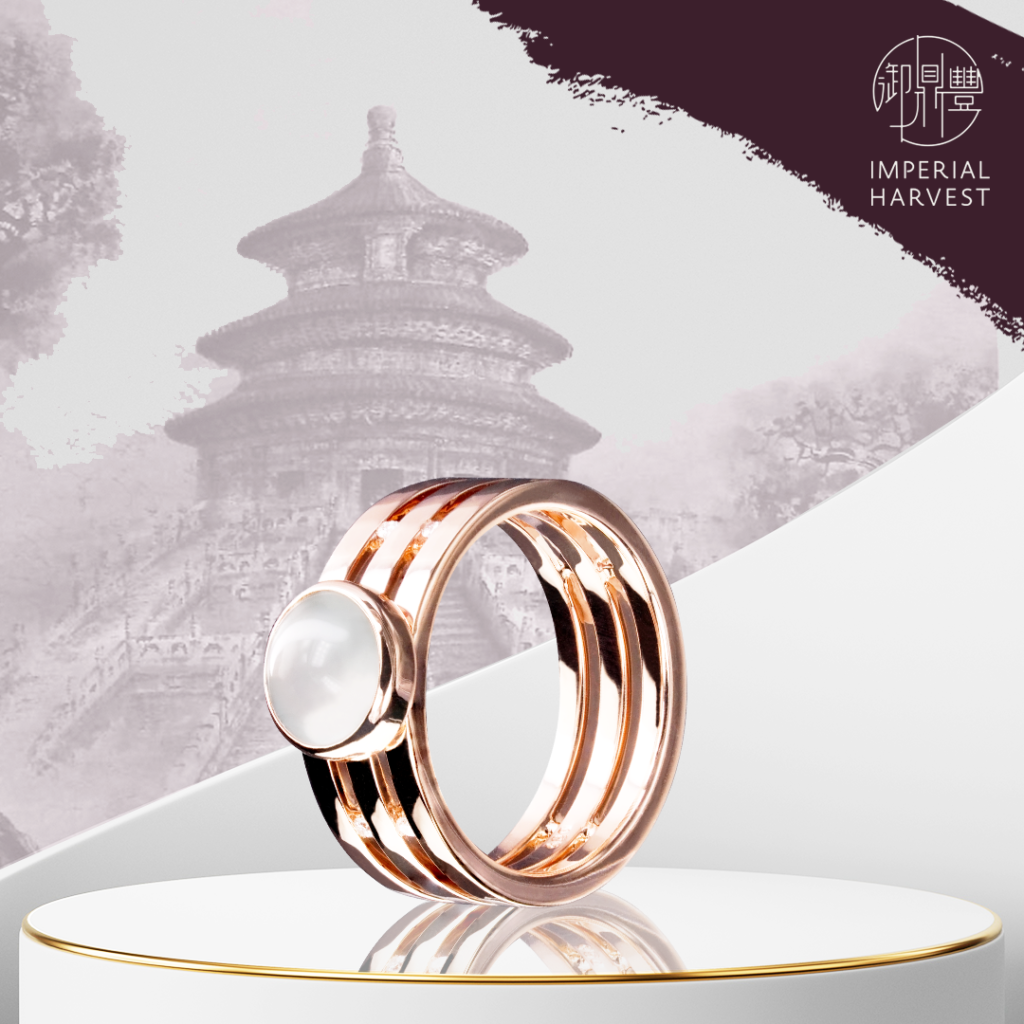 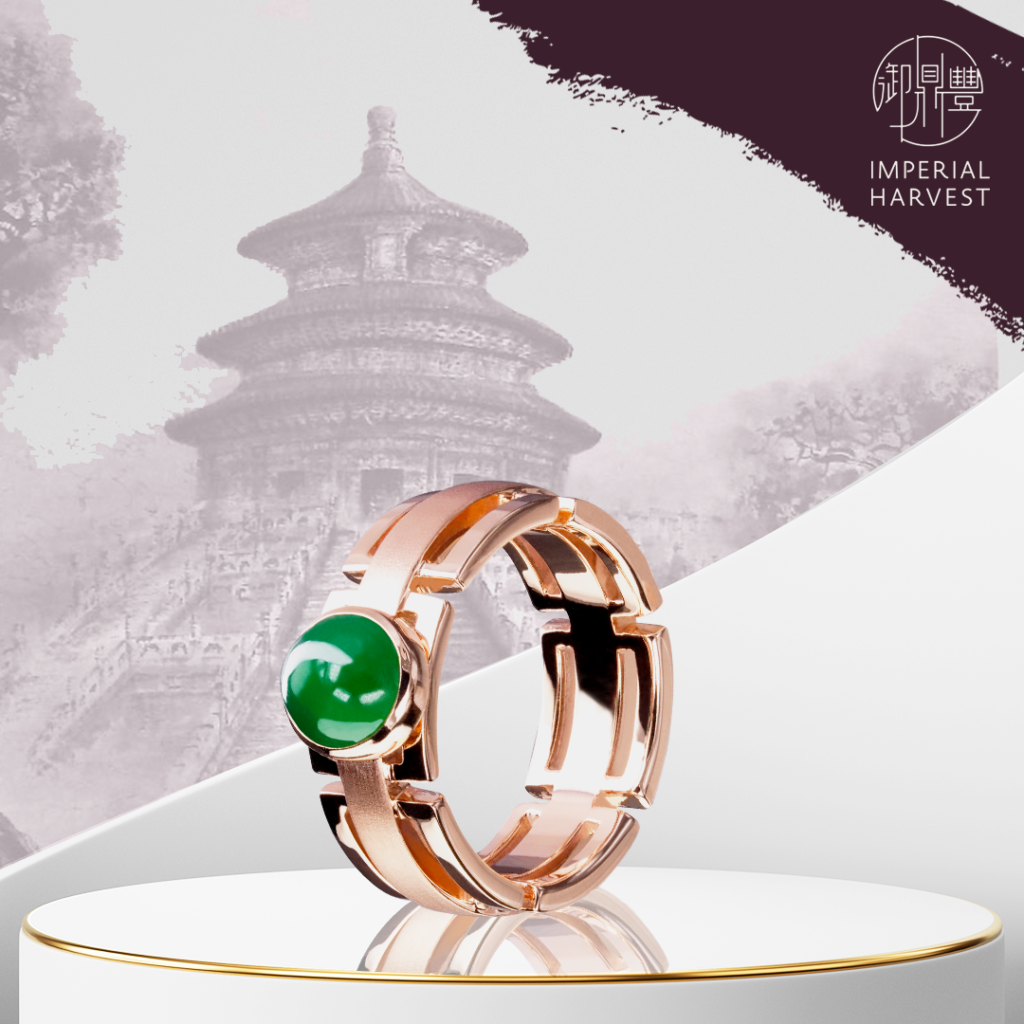 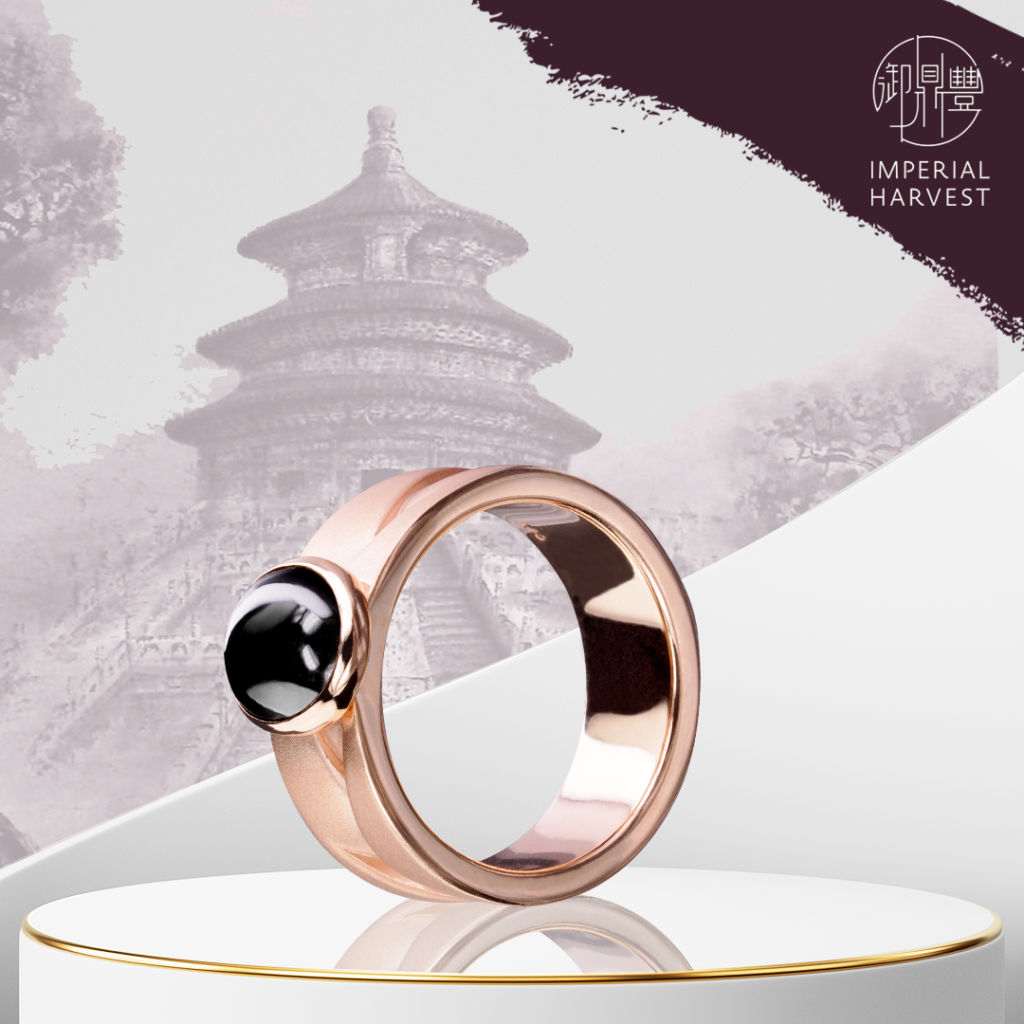 The Temple of Heaven – The Two Altars