Posted by Imperial Harvest on 30 September 2022

Rites and Rituals of the Chong Yang Festival

The I-Ching, or the Book of Changes, is an ancient Chinese divination text that stands among the oldest Chinese classics. This ancient manual was based on the eight trigrams, utilising numerology as a form of divination. According to principles explained by the I-Ching, the number “6” corresponds to yin energy, whereas “9” is associated with its counterpart, yang. The number, “9” is believed to symbolise longevity, eternity and imperial authority in Imperial Feng Shui. 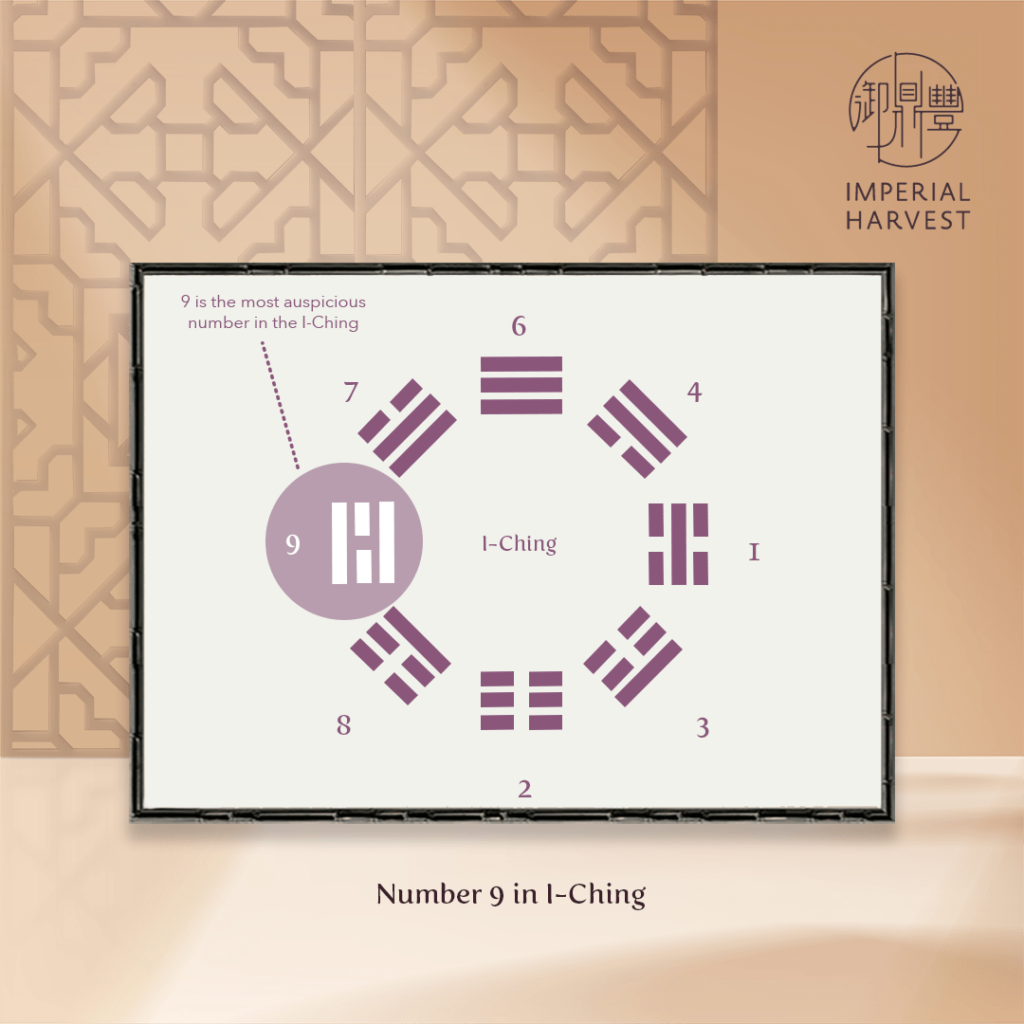 The Chong Yang Festival falls on the ninth day of the ninth lunar month — with the “chong” (重) in “Chong Yang” translating to “double”. Additionally, the double “9s” indicates an auspicious doubling of yang energies.

Over the millennia, many traditions have surfaced with the Chong Yang Festival. It is customary to view chrysanthemum trees in bloom, drink chrysanthemum wine and eat Chong Yang cakes. During the festival, women would weave chrysanthemum or zhuyu (茱萸) plants in their hair. They were believed to have cleansing qualities — helping to ward off negative energy and protect against natural disasters. 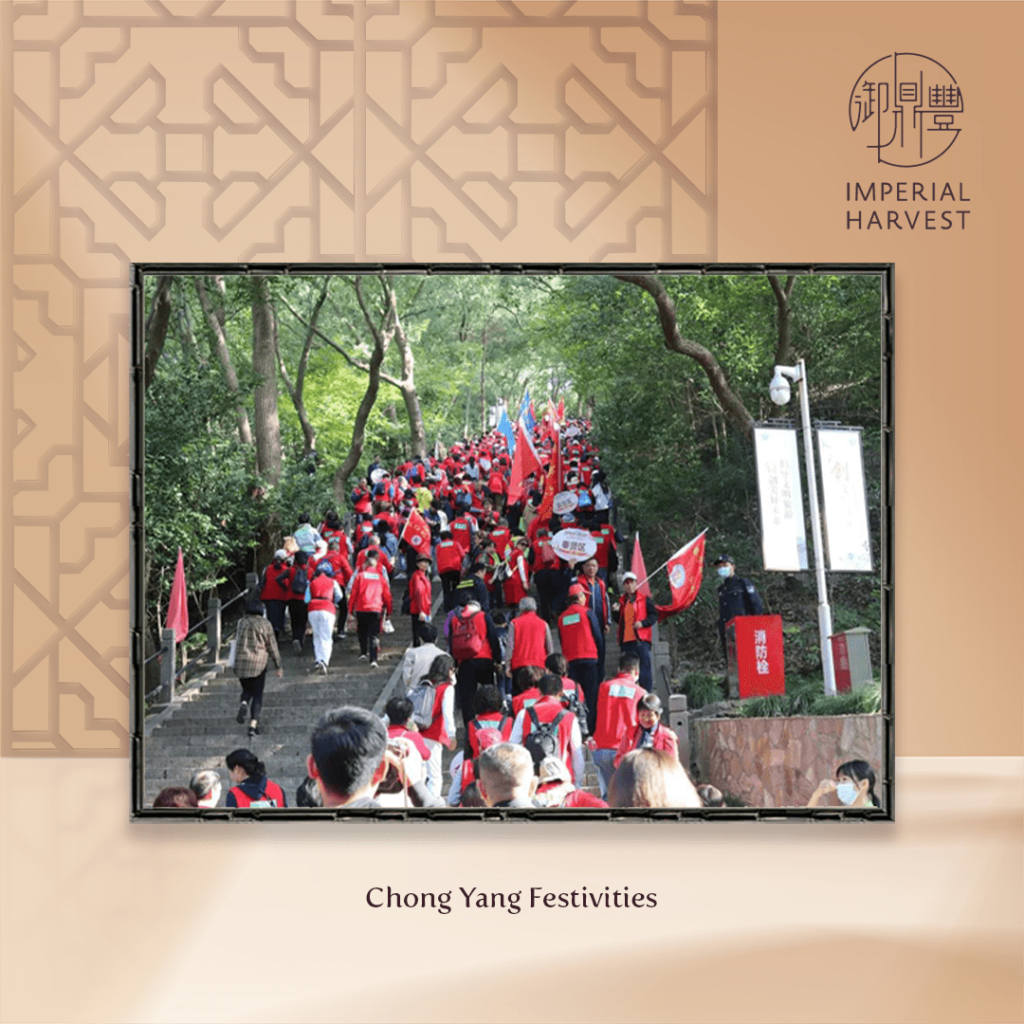 Ascending heights is another traditional Chong Yang Festival custom, relating to the Chinese idiom, “步步高升”. This saying translates to “rise further with each step taken”, citing the importance of taking the first step on your journey towards new heights in your career, business and investment ventures.

Coinciding with the solar term of Qiufen (秋分), the Chong Yang Festival was symbolic of the golden season of harvest. While many participated in the many festivities of the season, many also conducted heavenly prayers in gratitude for the bountiful autumn season. This custom was adhered to even by the ruling elite and other classes of high-ranking nobility, leading and participating in imperial rites to express their gratitude for their abundant blessings.

Leading the imperial rites during the Chong Yang Festival was the emperor, in gratitude for the abundance of the season while aligning the forces between Heaven, Earth and Man. He would lead his imperial court on a pilgrimage to Mount Tai. A sacred mountain in ancient Chinese culture, it was believed that the distance between Heaven and Earth was closest at the summit of Mount Tai and prayers offered would be more readily answered. 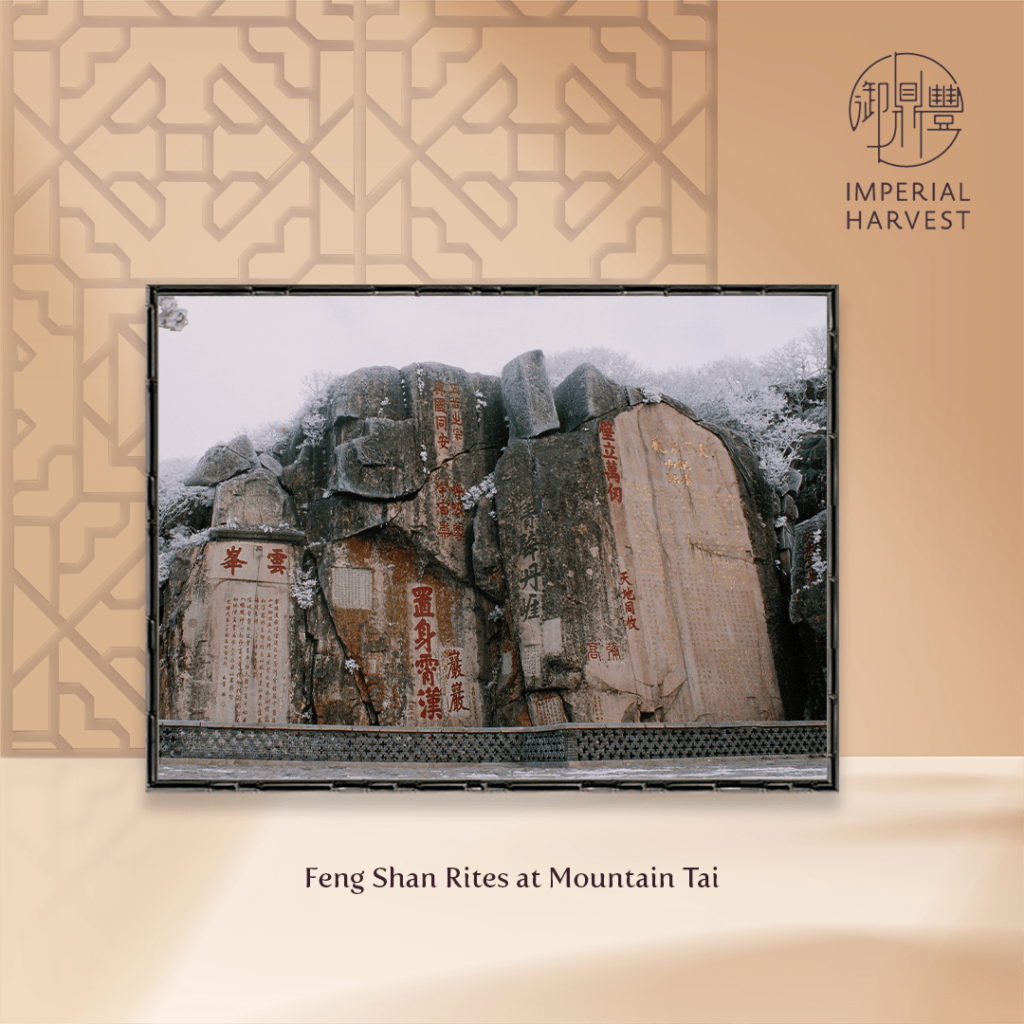 Upon reaching the mountain’s summit, the emperor would begin a series of elaborate rites known as Feng Shan (封禪) — offering prayers and tributes in gratitude to the Gods of Heaven and Earth. According to records documented during the Eastern Han period, these Feng Shan rites comprised two main rituals: building altars using the soil at the summit of Mount Tai to offer prayers to the God of Heaven, and clearing the land at the foot of the mountain to express gratitude to the God of Earth for the year’s harvest.

The Chong Yang Festival represents an immensely opportune time to leverage its auspicious double-yang properties. The 2022 exclusive Imperial Harvest Qian Long Jadeite Mountains are designed to supercharge the benefactor sectors of your homes, offices and properties and usher in great opportunities.

Standing at the forefront of Imperial Feng Shui, Imperial Harvest holds the principles of this noble art at its core. According to Imperial Feng Shui principles, the power of the benefactor sectors of a home or office is harnessed through the activation of the mountain star.

One of the forefathers of Imperial Feng Shui, Emperor Qian Long was a knowledgeable and wise figure in history. His military and political prowess led the Qing Dynasty to great success, with his intellectual and artistic triumphs igniting great advocacy for Imperial Feng Shui.

A well-cited principle in Imperial Feng Shui, “山管人丁，水管财”, cites the importance of mountains in an individual’s fortune. Mountains, sturdy and stable, were powerful and imposing symbols in Chinese culture, with the ancient Chinese placing great emphasis on situating their homes or important structures within the vicinity of auspicious mountain landforms.

During the Qing Dynasty, Imperial Feng Shui masters encountered a fundamental challenge in siting important imperial structures. Every 20 years — one Feng Shui period — the position of the mountain stars would shift, making the reorientation and reconstruction of imperial palace structures both technically and economically challenging.

While the sacred Feng Shan rites were traditionally conducted at Mount Tai, ageing emperors would no longer have the vitality to lead a pilgrimage to the sacred mountain. These considerations gave rise to the first Qian Long Jadeite Mountain, an ingenious and practical alternative to harness the power and energy of auspicious mountain stars without restriction.

Such meticulous jadeite craftsmanship began with laborious grinding and shaping process. The artisans would then carve a myriad of emblems and sceneries, such as imperial inscriptions, Chinese idioms and seals into the jadeite in varying levels of relief — giving each jadeite mountain an unparalleled sense of depth and dimension. Such craftsmanship is today, reflected at Imperial Harvest, with our Imperial Harvest Qian Long Jadeite Mountain collections mirroring such unrivalled gemstone carving techniques. 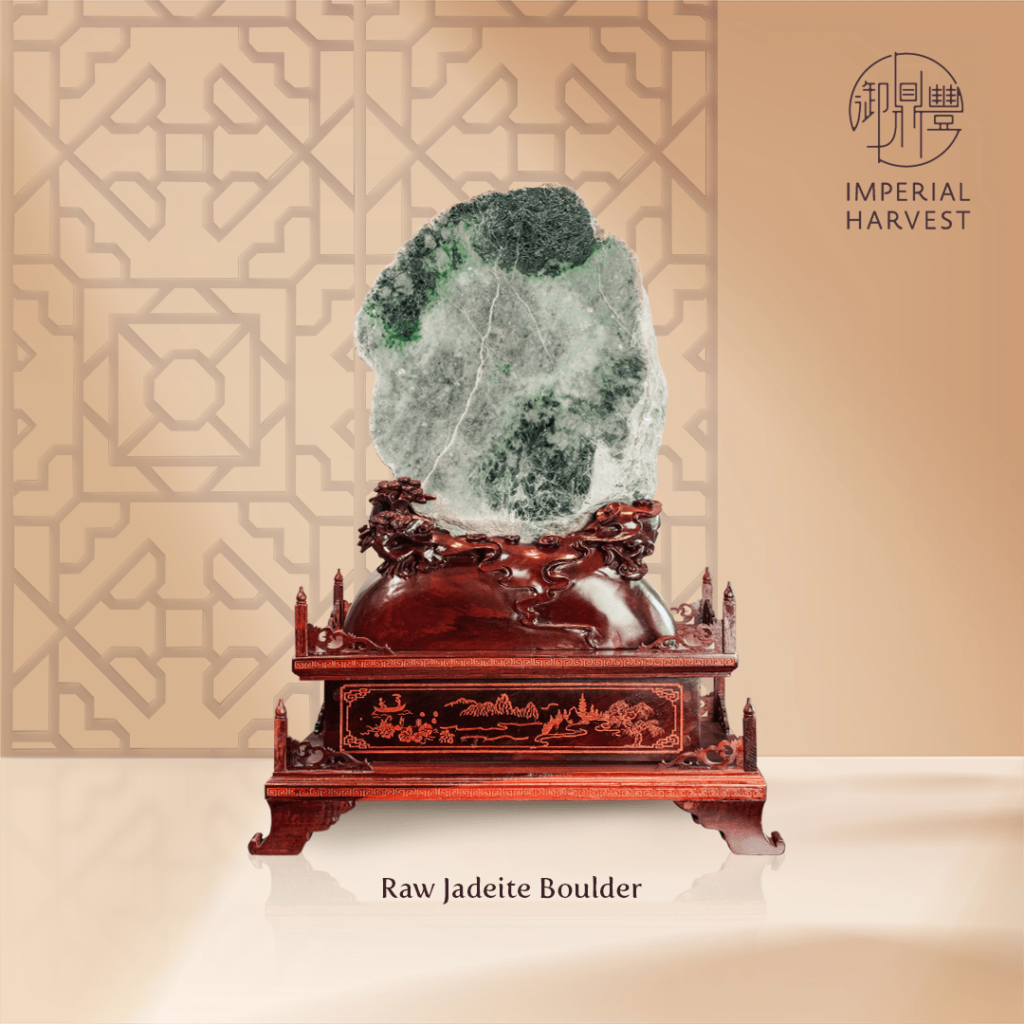 Today, these jadeite mountains are part of museums and art collections around the world. The most well-known of which are Travelling in Autumn Mountains (秋山行旅图), which is currently in the collection of Beijing’s Palace Museum; The Great Yu Taming the River (大禹治水图) and Nine Elders of Huichang (会昌九老图). Today, some of these Imperial Feng Shui artefacts have found their way to the world’s most prestigious auction houses — Christie’s and Sotheby’s — commanding record-breaking auction prices. 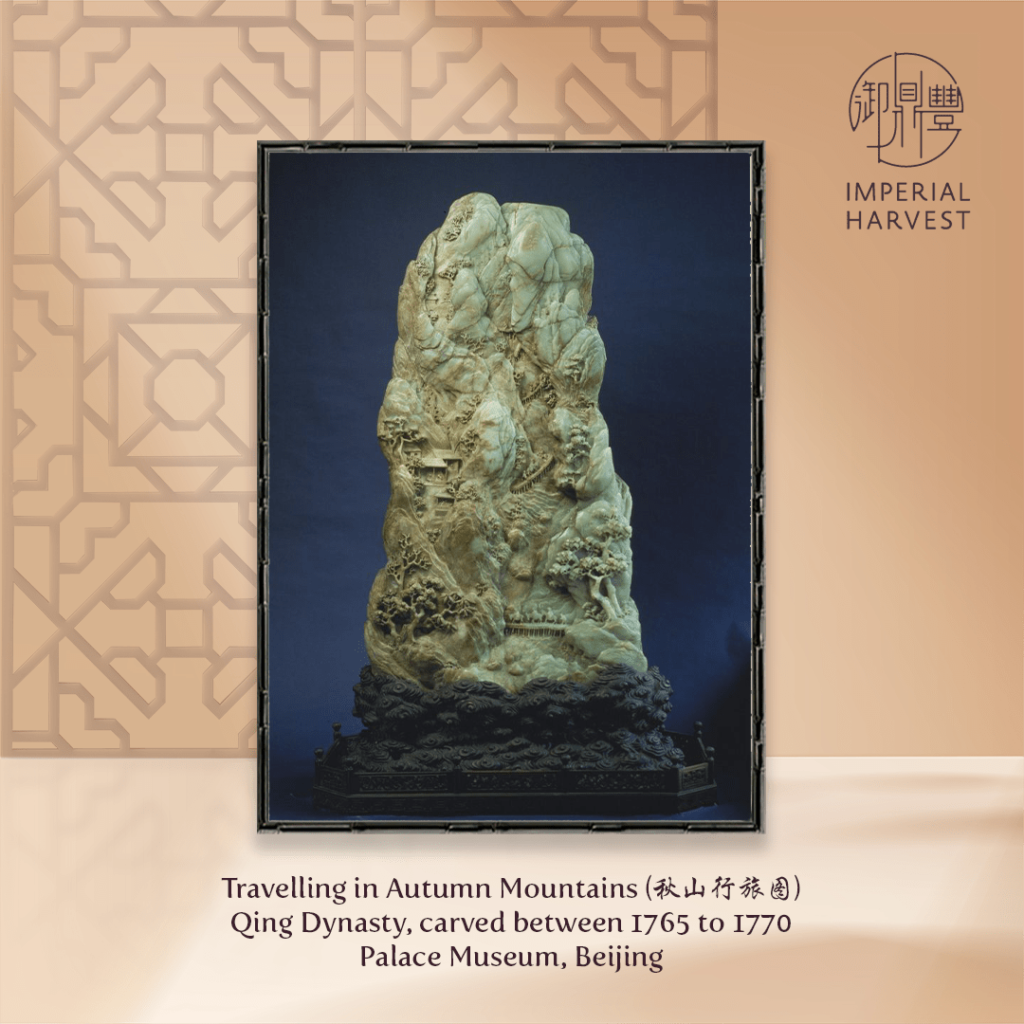 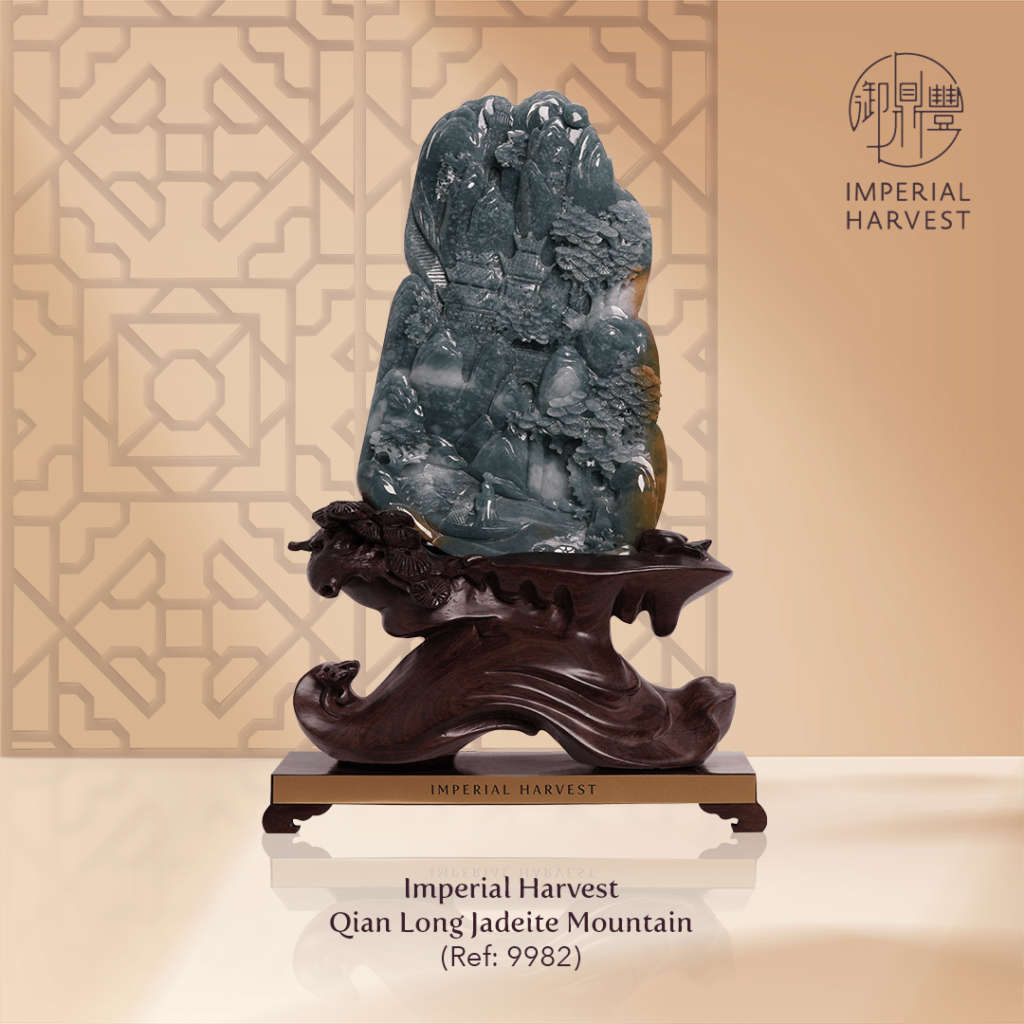 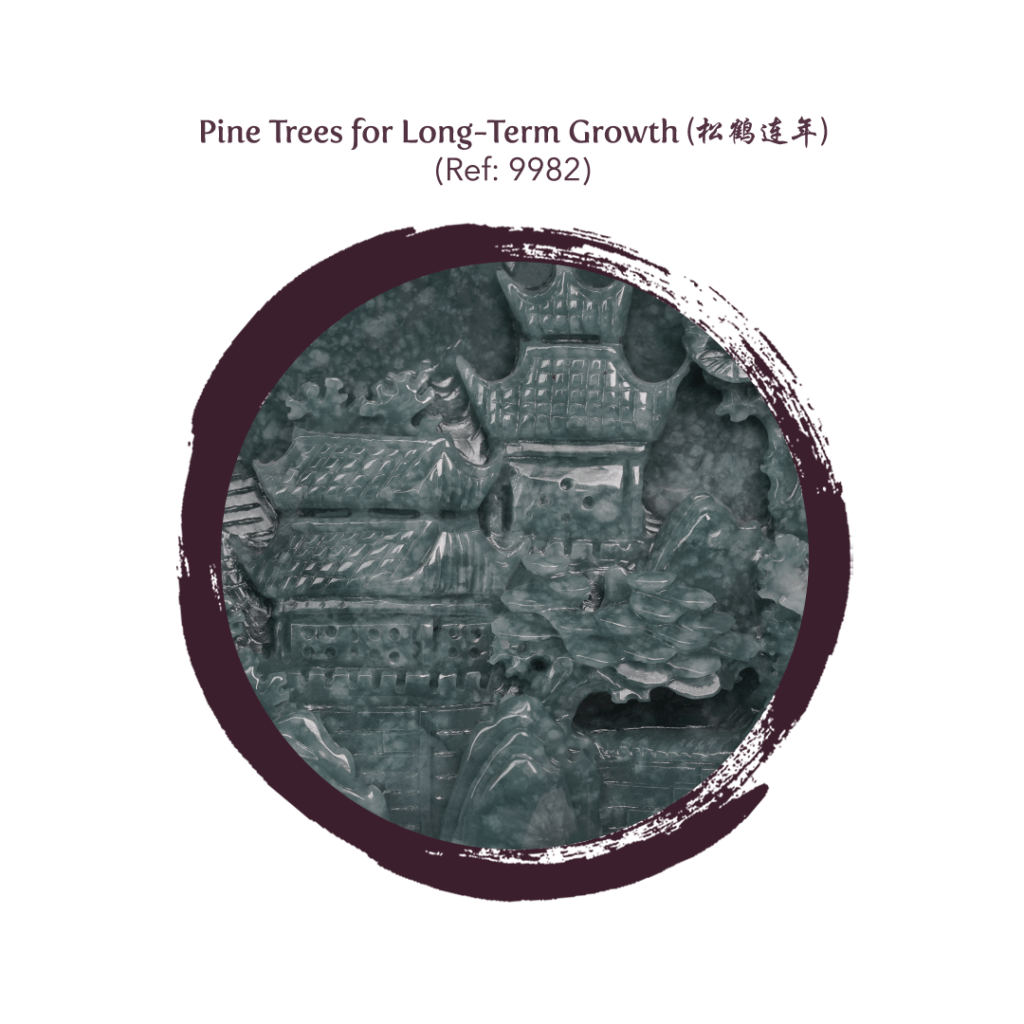 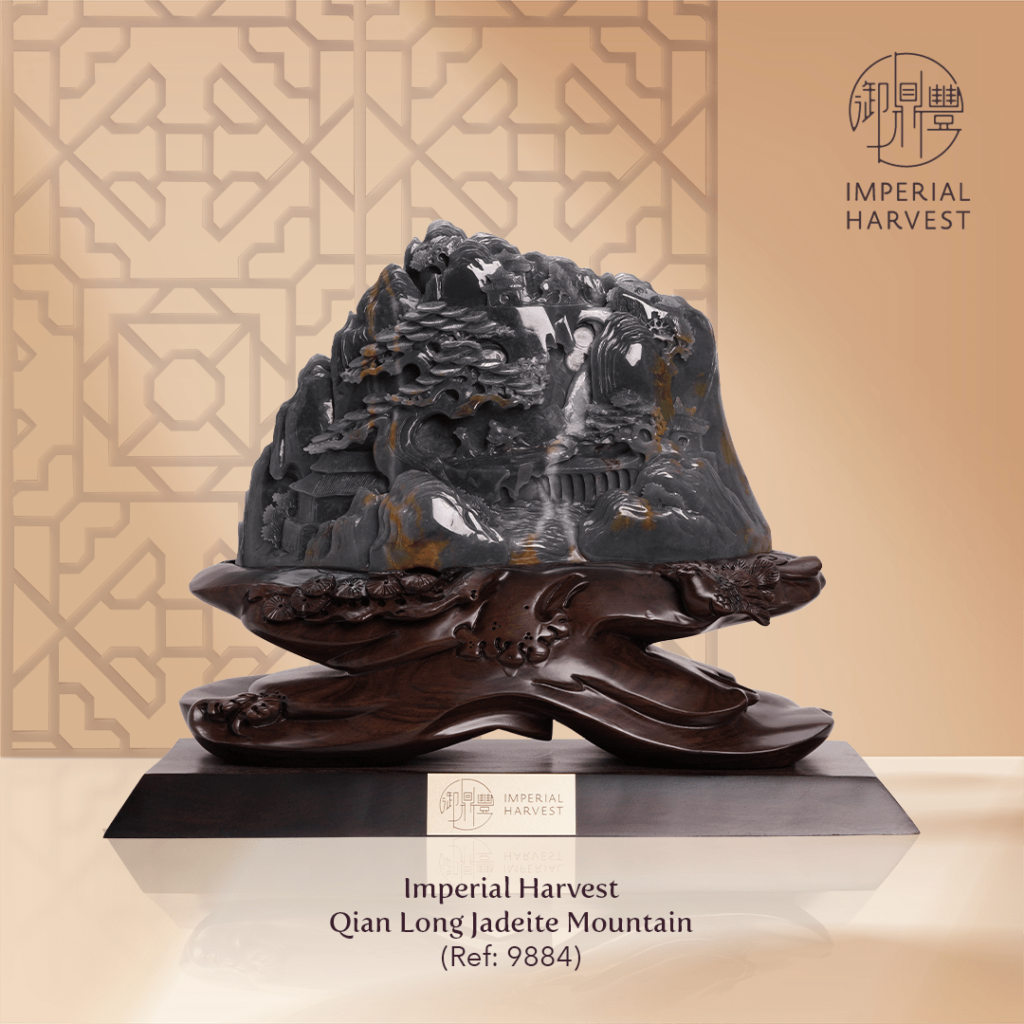 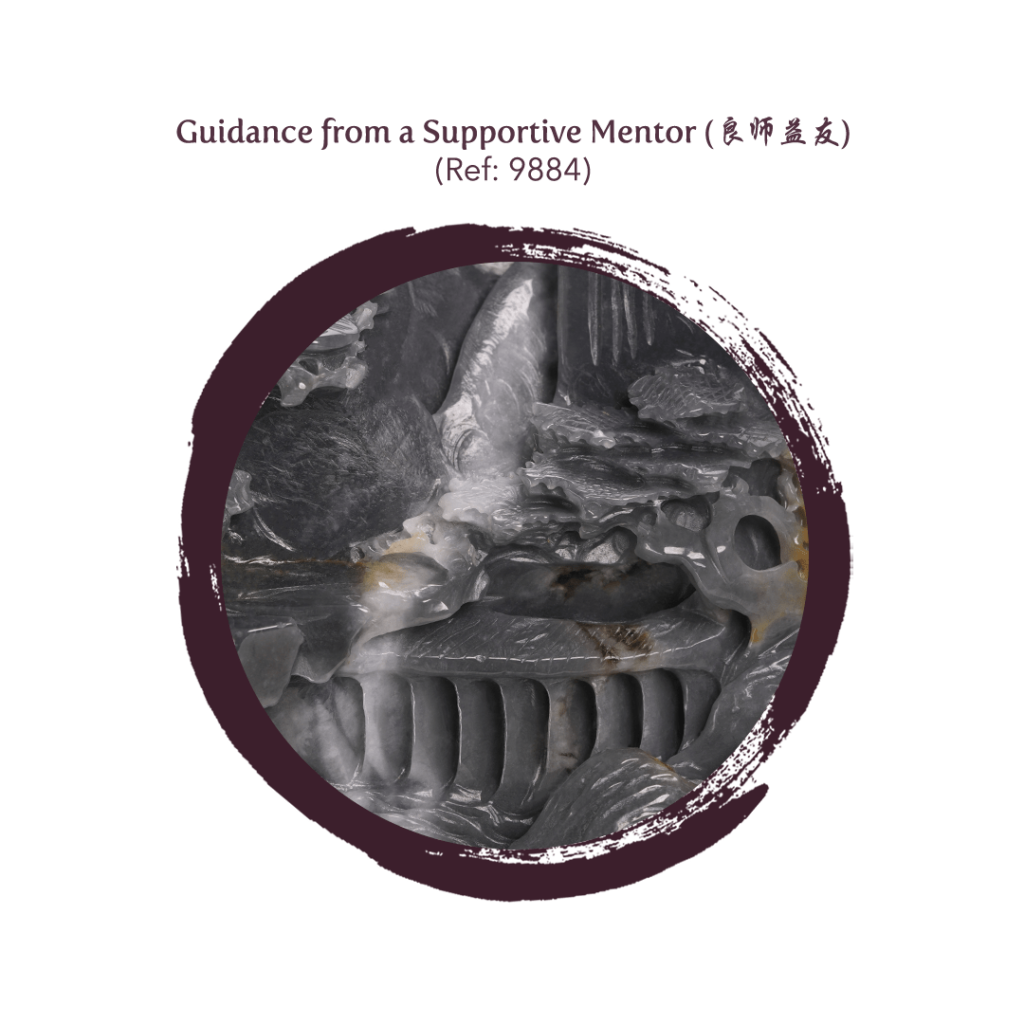 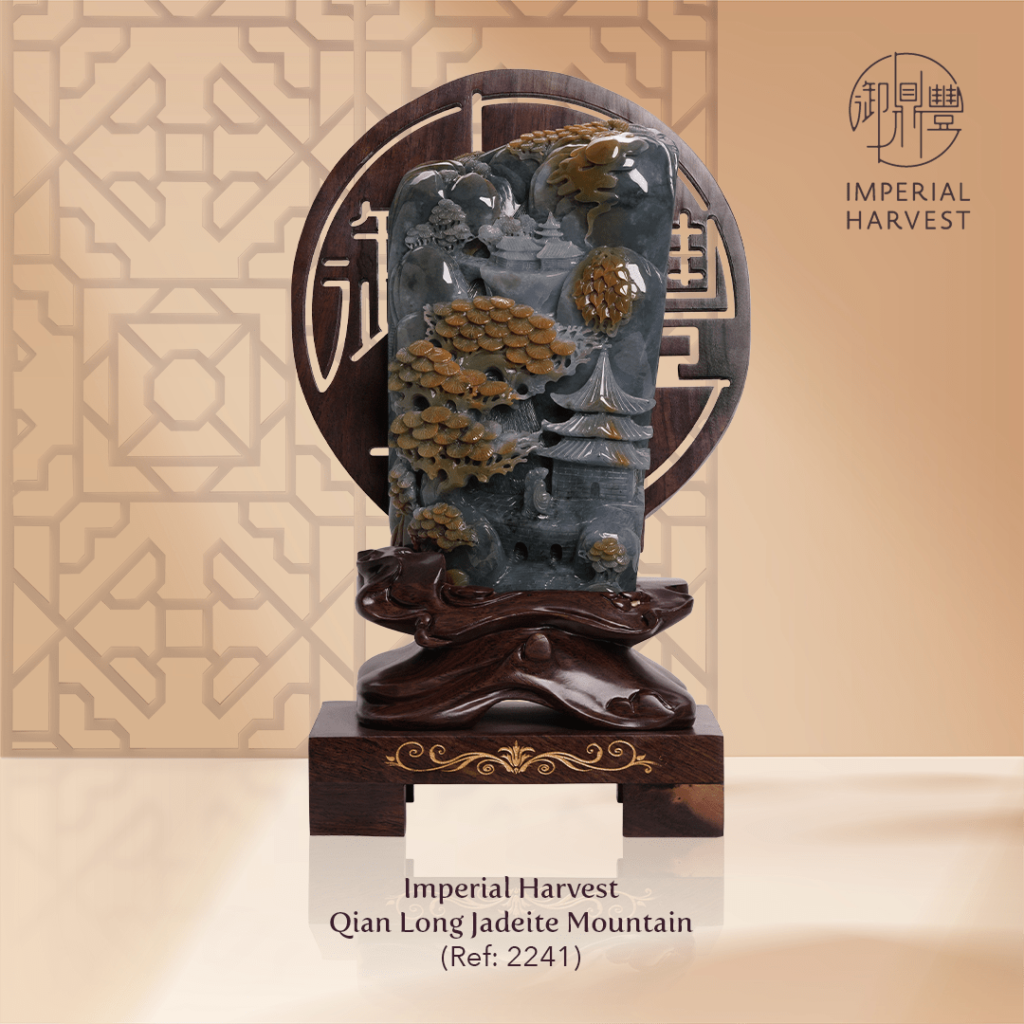 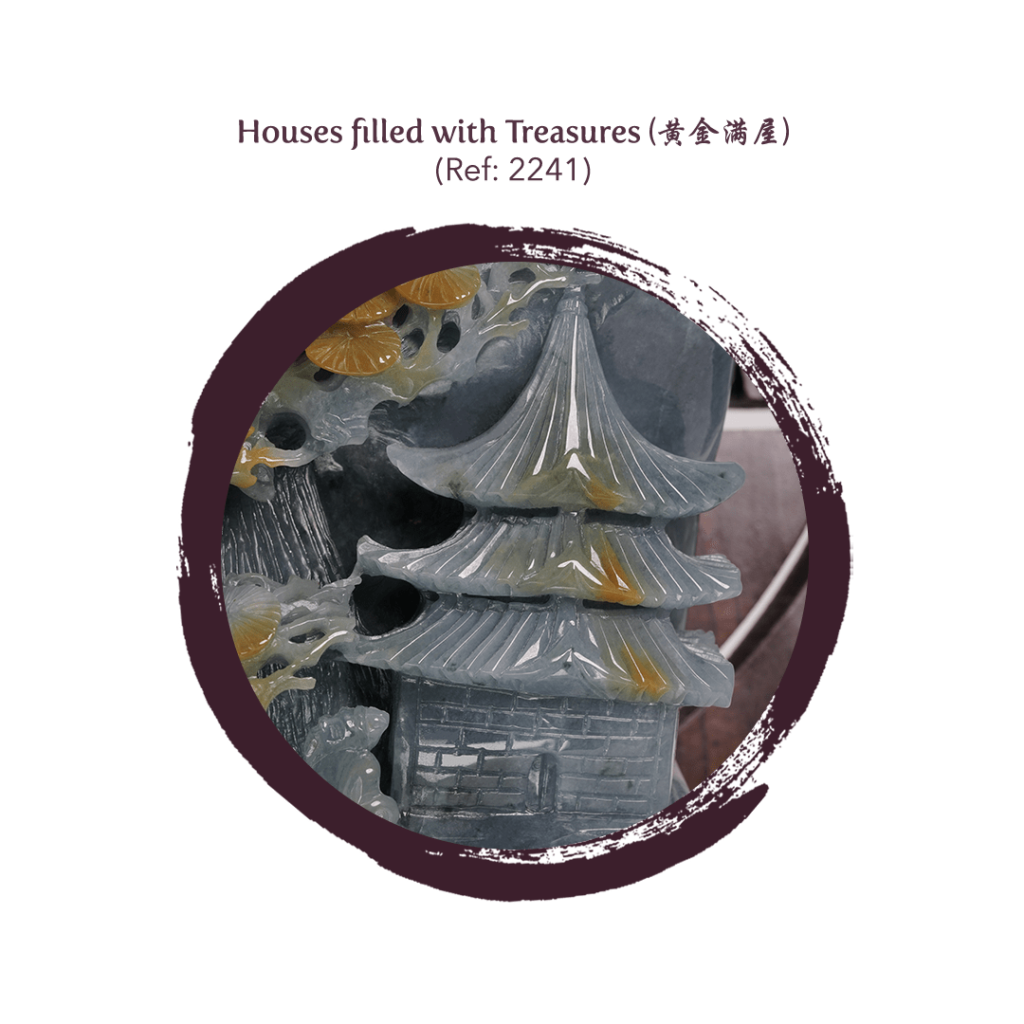