Posted by Imperial Harvest on 28 October 2022

Our home should be a place for us to mentally, physically and emotionally unwind. A home that is full of vibrance, vitality and positive energy brings its household joy and auspicious blessings. With such an impact on the well-being of its occupants, maintaining optimal Feng Shui in the home is paramount for individuals to prosper in their careers, businesses, investments and wealth.

In this article, we will be sharing some Feng Shui tips to help you optimise and enhance the Feng Shui of your home, and what you can look out for in Period 9 of the Feng Shui cycle. 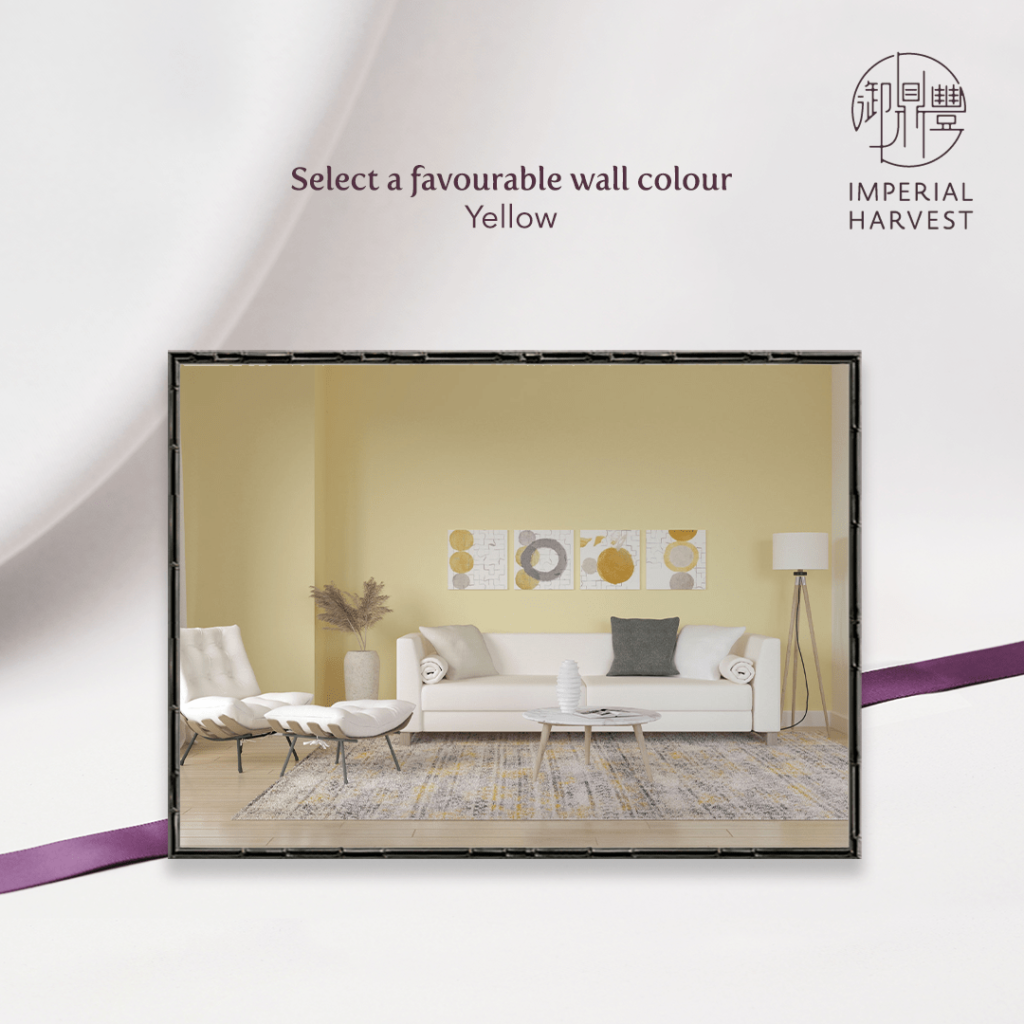 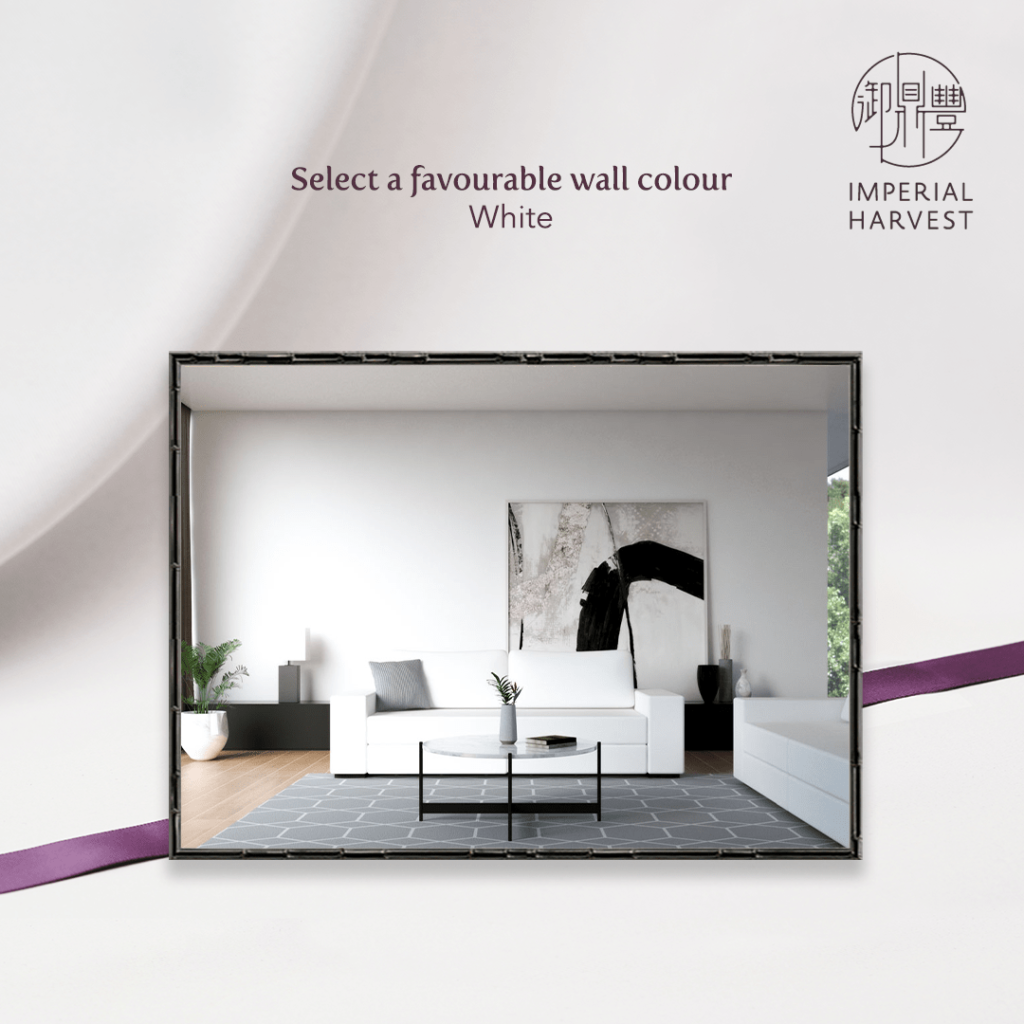 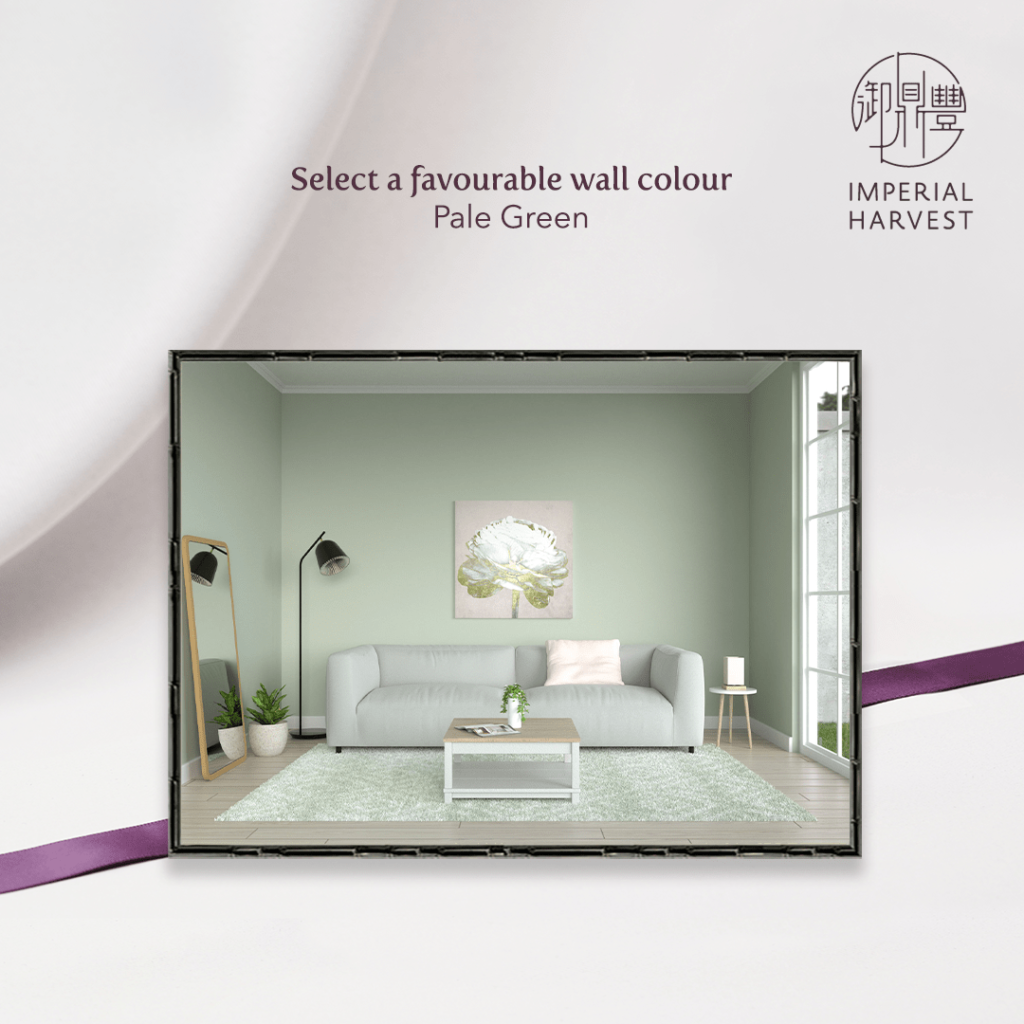 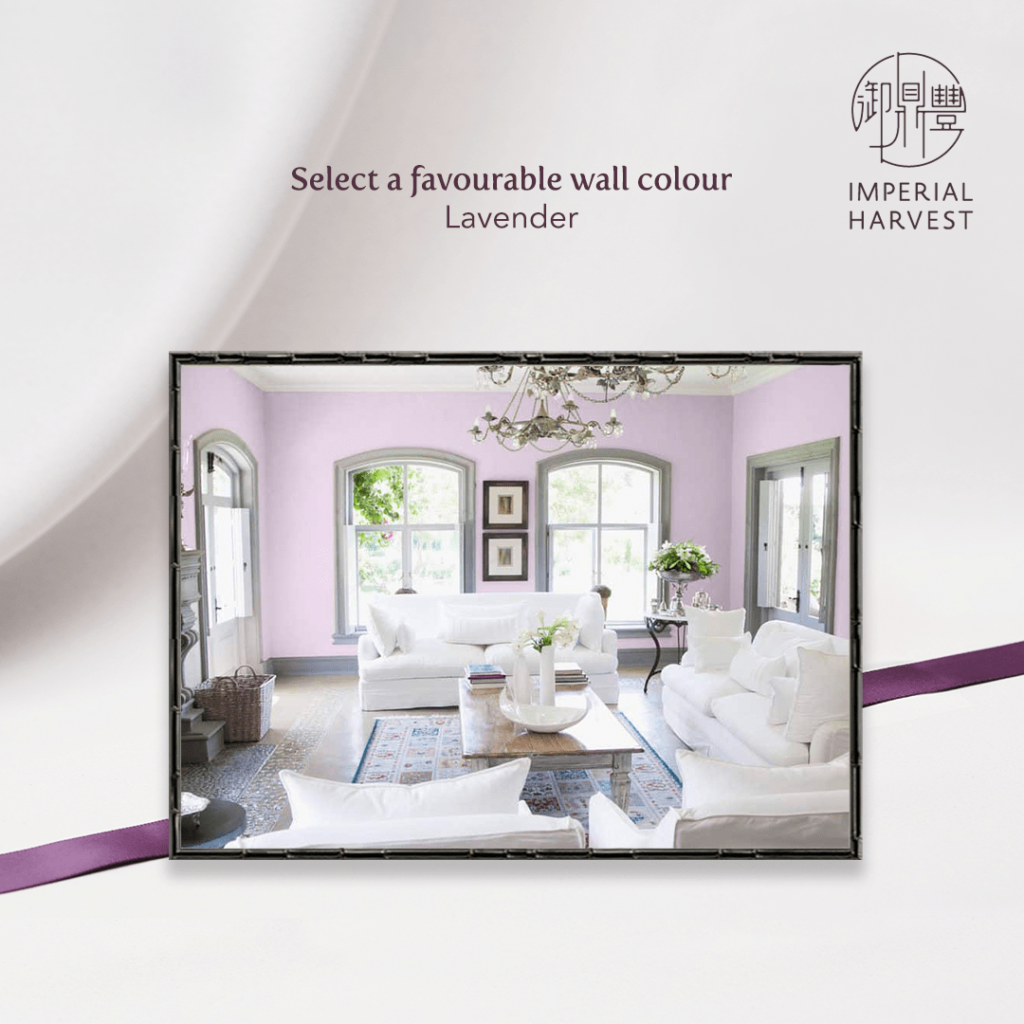 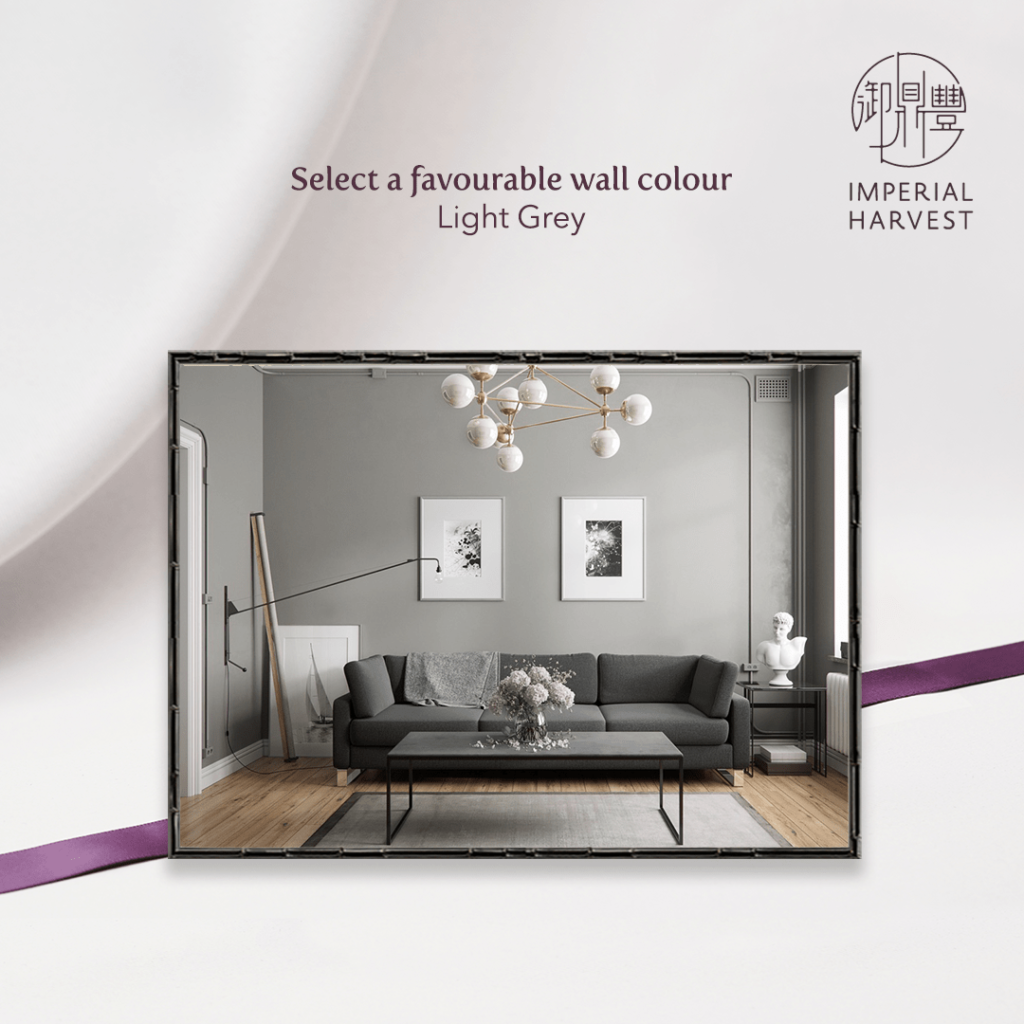 Darker colours and cooler tones can compress the visual sense of your home, whereas lighter colours are preferred for their ability to draw light and spaciousness to any space. Lighter-coloured walls help to maintain the energy within the household, keeping it comfortable. However, these lighter tones should be favourable toward the homeowner’s elemental chart.

As real estate values rise and apartments are downsizing, smaller units are becoming more commonplace. An issue prevalent in such smaller-sized apartments is the lack of ample storage space, which may lead to clutter in the home or an accumulation of debris — such as unwanted mail, newspapers or trash. 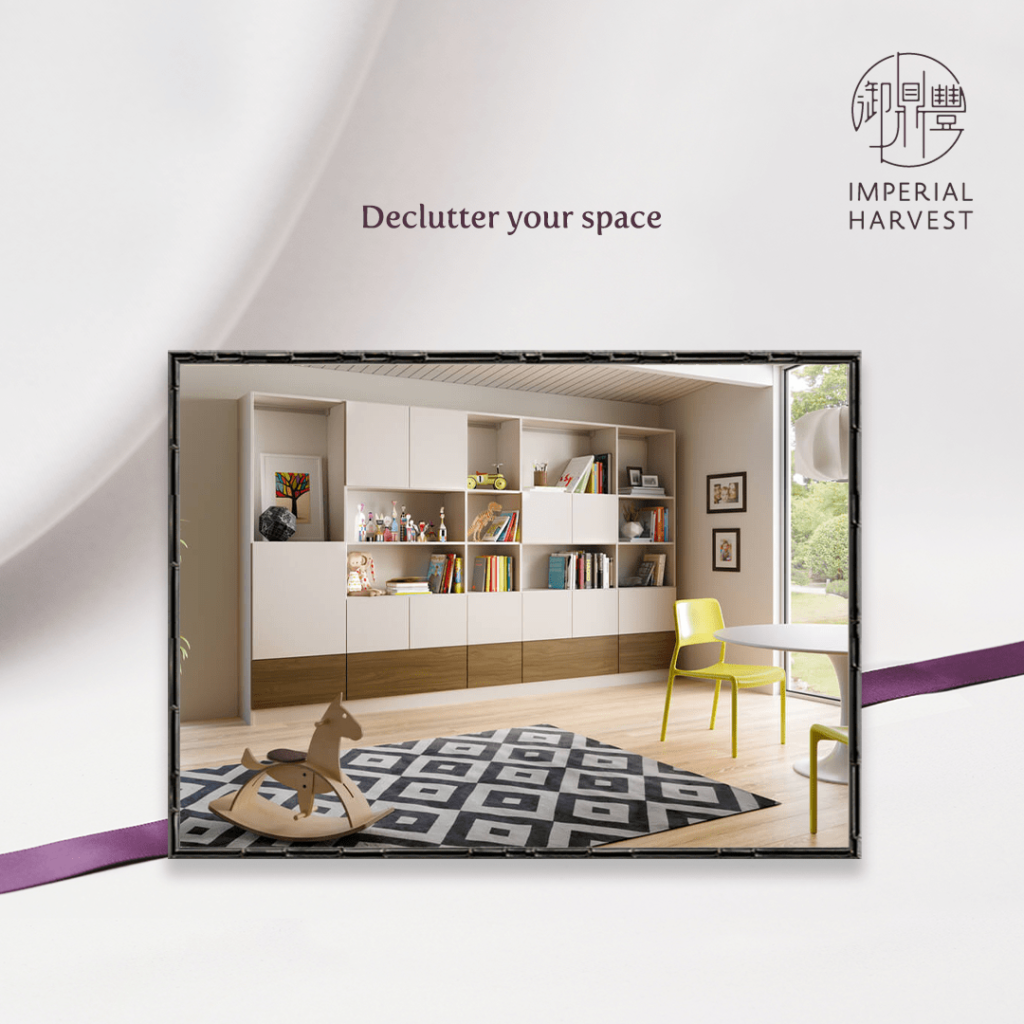 With a lack of storage space, places in the home that accumulate debris can generate Sha Qi, or negative energy. Over time, the accumulation of Sha Qi negatively affects the fortunes of the household’s occupants.

Install curtains in your home

A common feature of many homes, curtains are especially effective in Feng Shui applications, especially in blocking negative energies from entering your home. When installing curtains in your home, ensure that they are not too thick and allow for sufficient airflow. Curtains that are too thick could block auspicious Qi from entering the household, which is not ideal for occupants of the space. 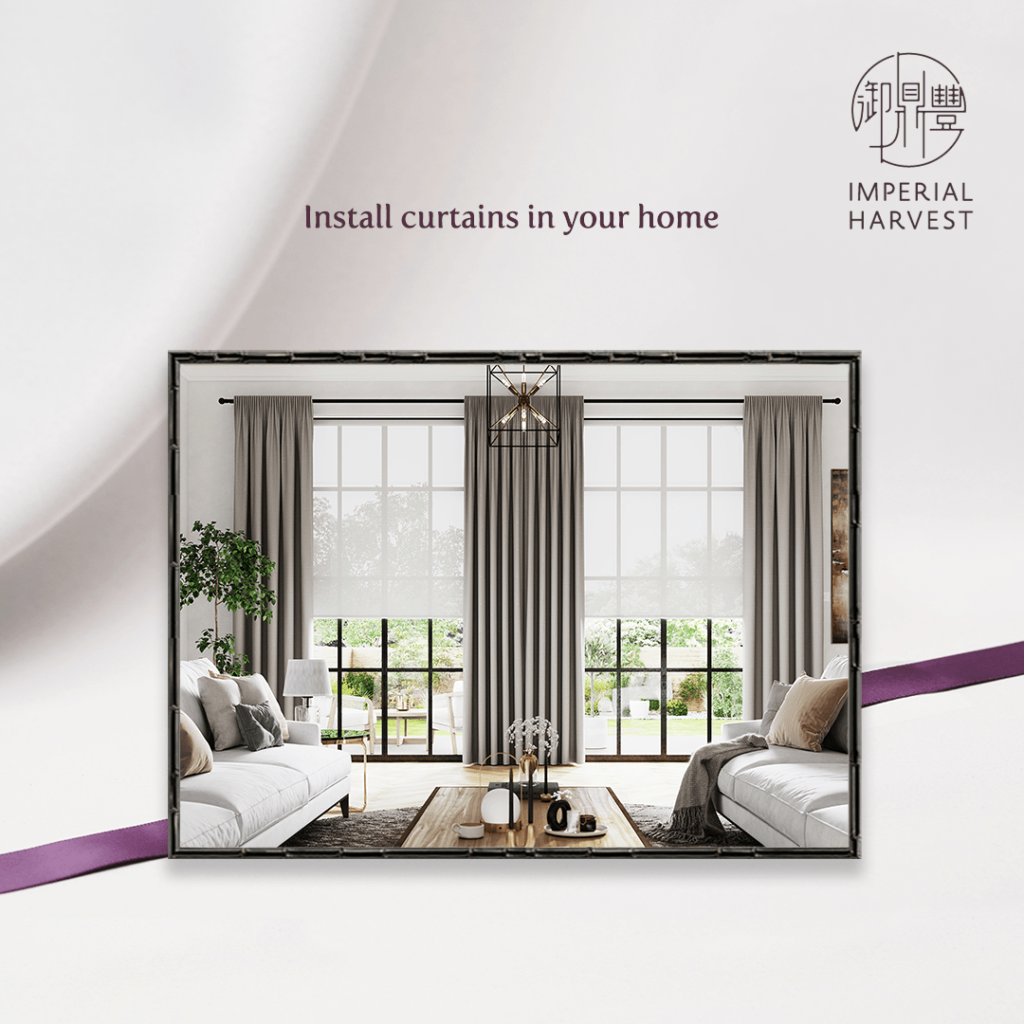 The living room is a lively part of most homes, a central location where you, your family members and friends would gather. Therefore, maintaining and ensuring that this space has optimal Feng Shui takes importance when designing your home. 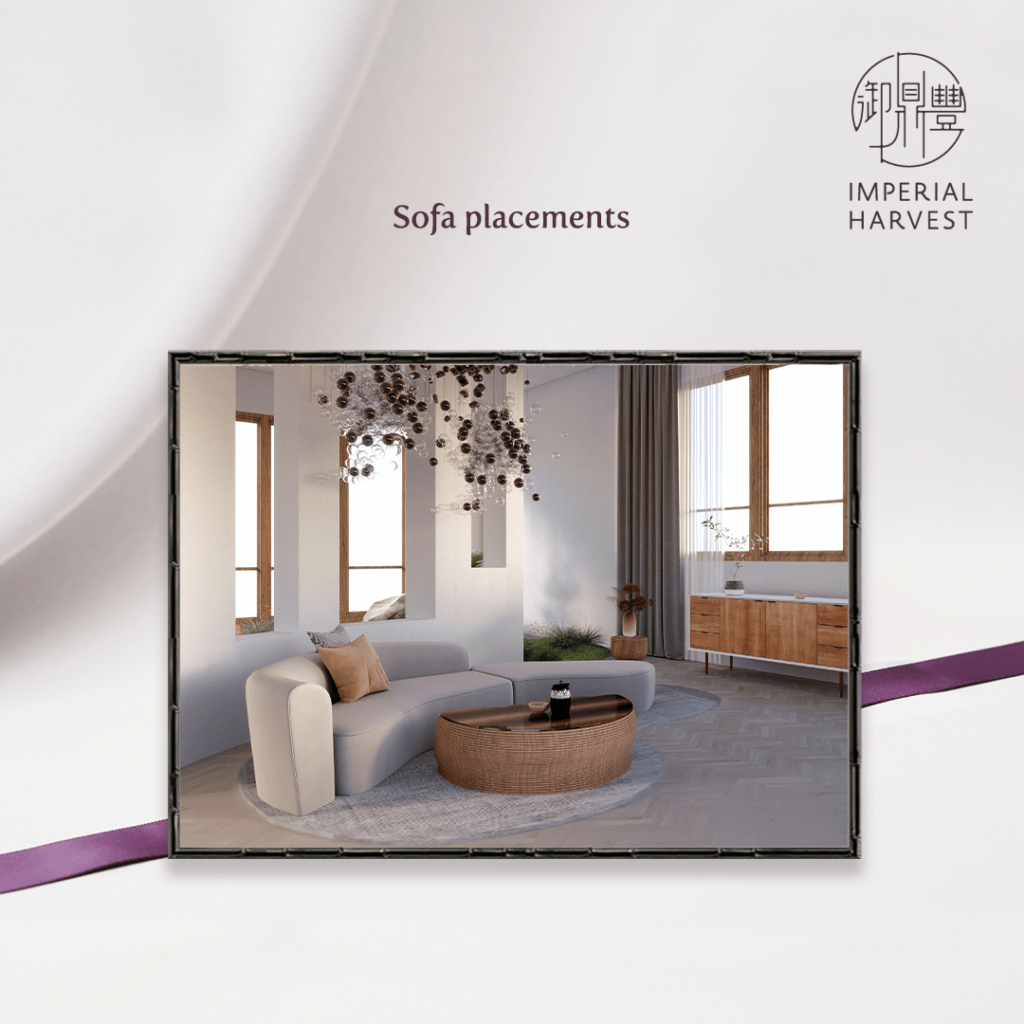 When selecting a sofa for your living room, choose rounded sofas over oddly-shaped ones, as rounded sofas are more conducive to fostering interpersonal relationships and improving communication within the home. Selecting a sofa that corresponds with your favourable element empowers you to be in a state of consistent good luck — placing you in good stead to achieve breakthroughs in your career, sales or investment ventures.

When placing your sofa, be sure to sit it against a wall. In Feng Shui, the stability that the wall provides represents the benefact and mentor support gained by the individuals living in the household.

Placing mirrors in the living room is often considered a Feng Shui asset, with the ability to reflect, and effectively multiply, auspicious effects in your home. However, mirrors should not be placed facing the main entrance to your home, nor should they be placed facing the kitchen. In both cases, the placement of the mirror would create chaotic energy within the living room. 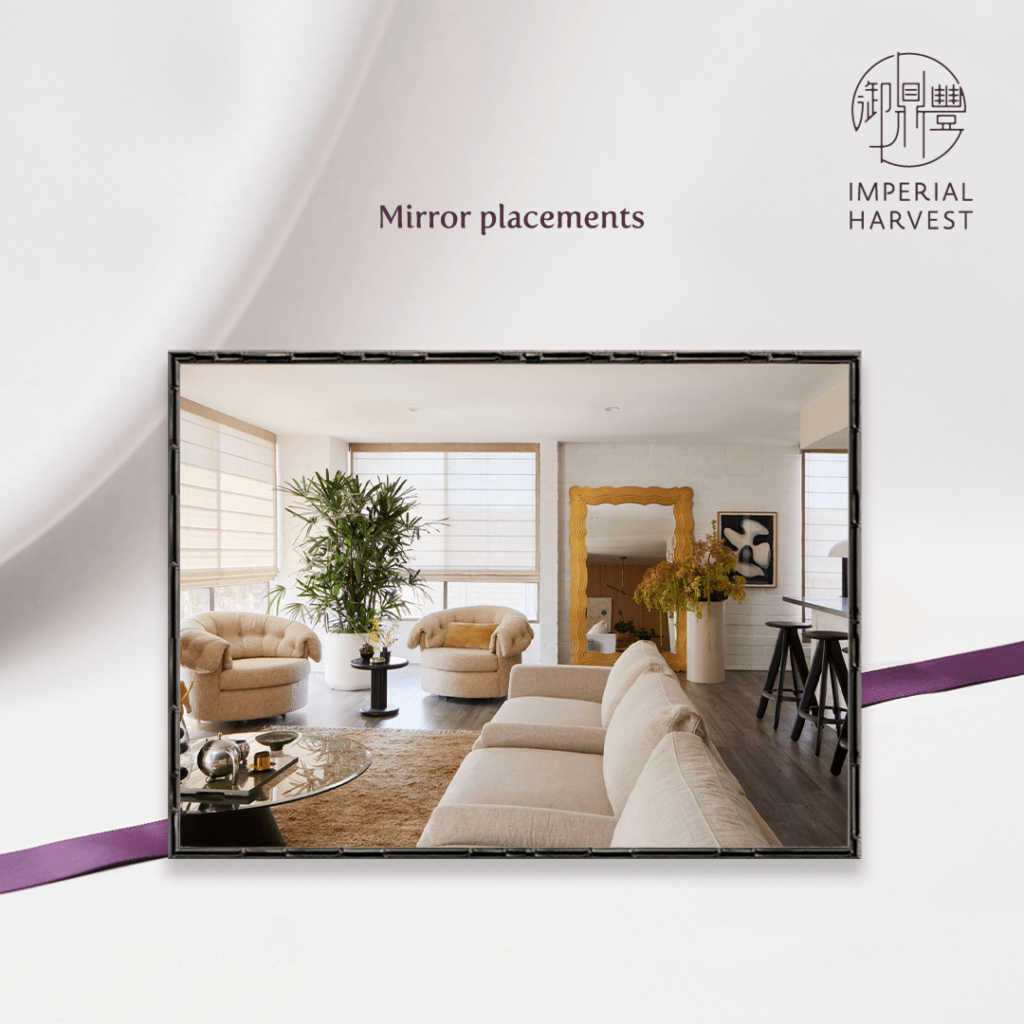 Placing a mirror behind the living room sofa is a common aesthetic choice that makes the space appear larger. However, doing so is a Feng Shui taboo unbeknown to many. It turns the solid wall into a virtual wall, blocking benefactor support from entering the home.

Feng Shui’s relevance only increases in the age of technology-enabled economies, particularly as we transition from Period 8 to Period 9 of the Feng Shui cycle. In the context of Imperial Feng Shui, a Feng Shui period (元运) refers to a span of years within a multi-planetary calendar system that tracks the movement of major planets relative to the Earth. Each period represents a set of conditions favourable towards certain industries or socio-economic trends. In 2024, both Early and Later Heaven Luck will overlap, heralding a new chapter in Feng Shui.

As the Feng Shui periods change, so can the different auspicious sectors within each home. For example, the wealth sector of your home may not remain the same in Period 9, as it did in Period 8. Reassessing your home is then, paramount in ensuring that it remains in good stead as we move towards Period 9. 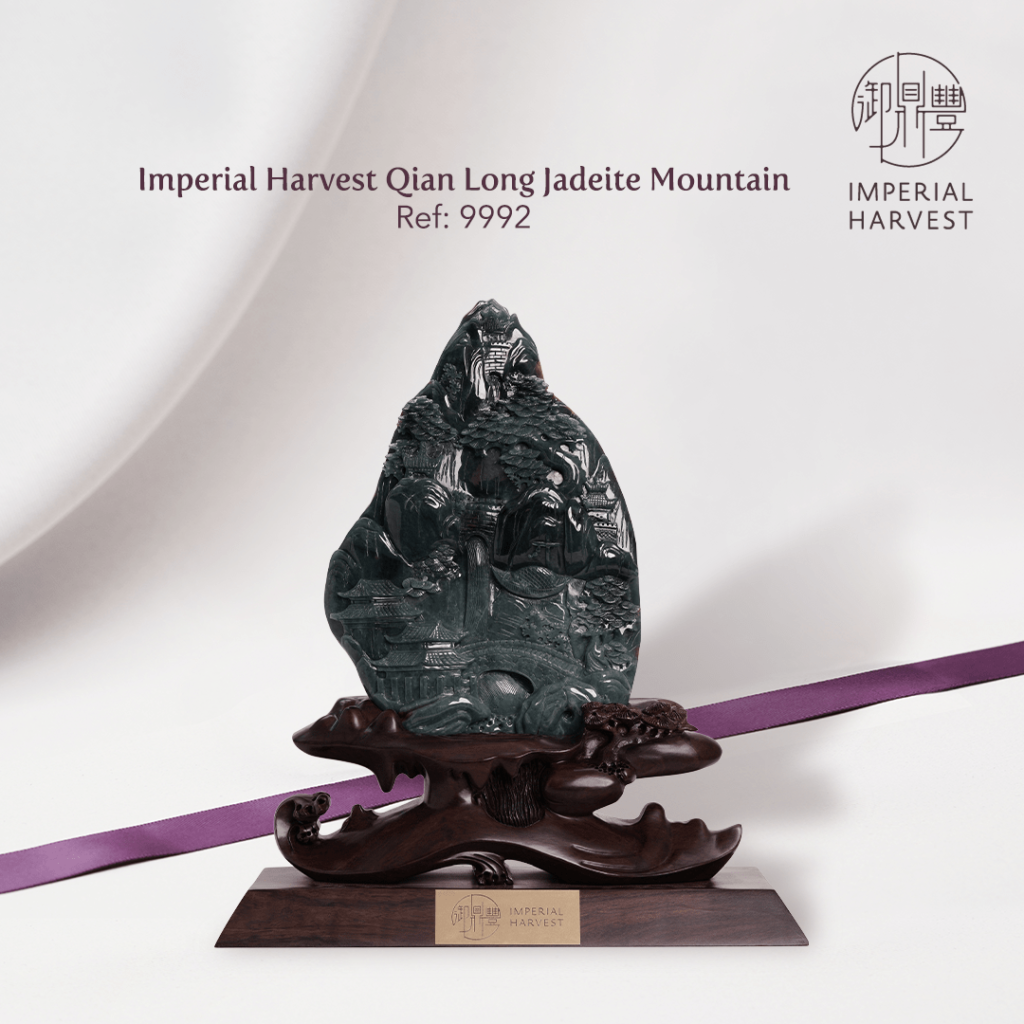 Mountains are considered powerful symbols in Imperial Feng Shui, symbolising stability, power and benefactor support. Imperial Feng Shui masters in the Qing Dynasty sought to harness these auspicious landforms but found it unviable and impractical to reconstruct imperial complexes when the Feng Shui period changed every 20 years. The Qian Long Jadeite Mountain, an ingenious and practical alternative to this issue, allowed for the activation of the mountain stars that catalysed the success and prosperity of this great dynasty.

Today, this powerful artefact is reimagined by Imperial Harvest, melding time-honoured tradition with a contemporary point of view. The Imperial Harvest Qian Long Jadeite Mountain empowers its destined owner with great benefactor support and authority, propelling them to greater heights. 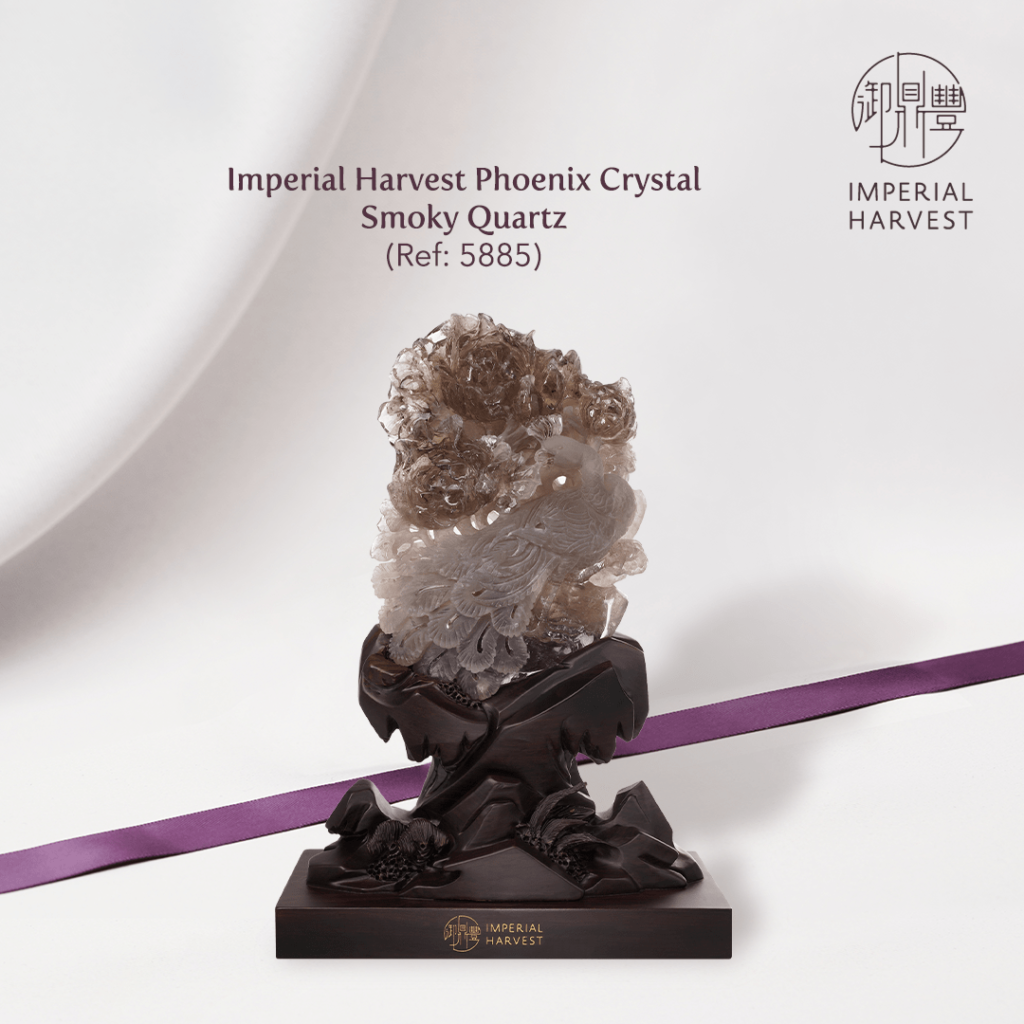 Water landforms, such as rivers and lakes, bear auspicious connotations with prosperity in Imperial Feng Shui — their image suggesting an influx of wealth and smooth success in an individual’s personal and professional efforts. Imperial Feng Shui masters in the Qing Dynasty found it similarly challenging to reconstruct imperial structures in accordance with the changes in each Feng Shui period. Through their dedicated efforts, they unveiled the abilities that Imperial Harvest-grade crystals held in harnessing these auspicious water landforms.

Imperial Harvest’s Crystal collections are a contemporary reimagination of deeply-rooted Imperial Feng Shui traditions, deployed to activate the water star in the living and working spaces of countless clients. Promoting the flow of wealth within any property, the Imperial Harvest Crystal collection ushers in boundless wealth and prosperity, further bolstering their destined owners and establishing them as influential figures in their industries. 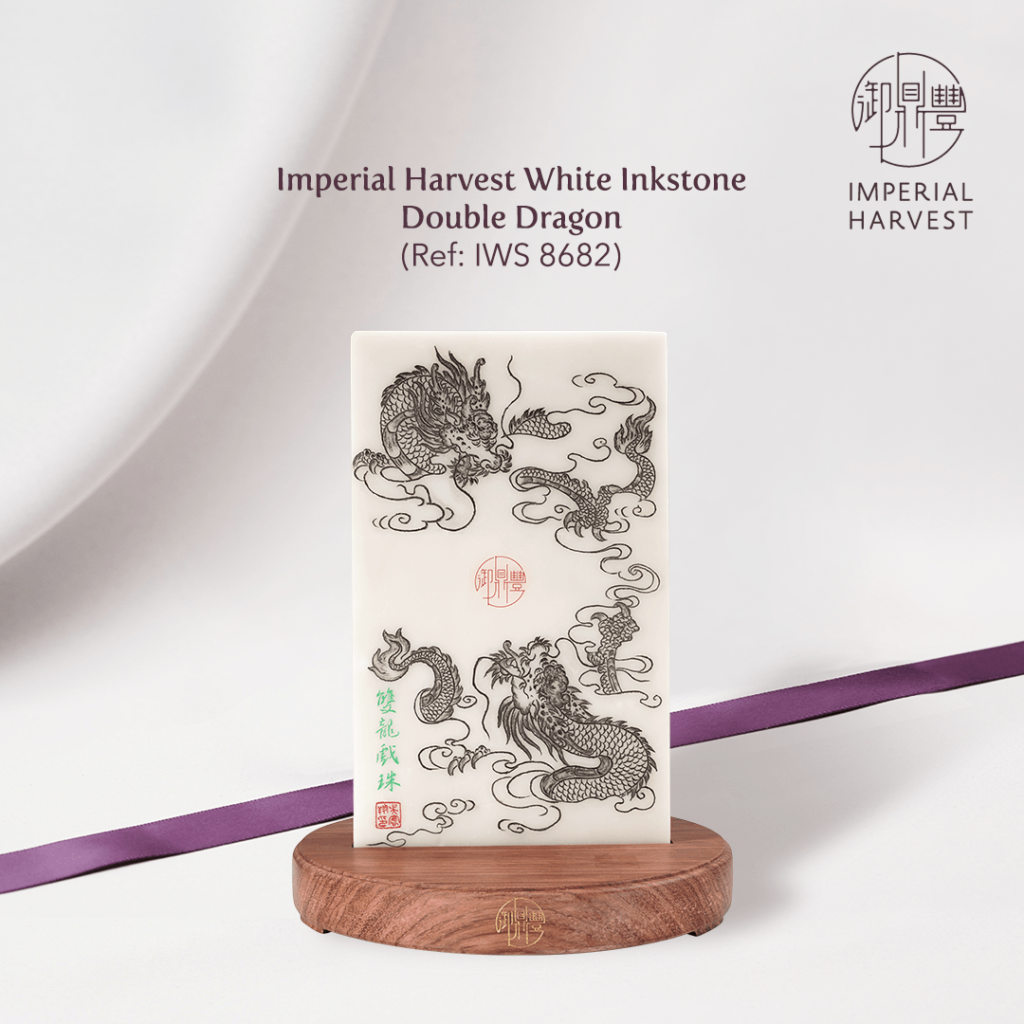 A versatile and powerful treasure among Imperial Harvest’s collections, the Imperial White Inkstone effectively counters issues that arise from missing sectors and negates inauspicious energies while simultaneously enhancing the auspicious sectors of the home.

In promoting the auspicious sectors of the home, the Imperial White Inkstone also brings key aspects of important deliverables to light — allowing its destined owner to arrive at sound and innovative decisions that bring them growth and prosperity.

As we move towards Period 9 of the Feng Shui cycle, learn how you can maximise the potential of your properties to take advantage of this new age in Feng Shui.

Imperial Harvest’s expert consultants are on hand to guide you on your journey, and help you to forge your desired destinies to realise your fullest potential. Book your complimentary  Period 9 Feng Shui consultation today or contact us at +65 91221826.

How to Enhance Your Workspace with Imperial Feng Shui

What is a Feng Shui Period