The Qing Golden Age under Emperors Kangxi and Qianlong was the most prosperous era of China’s dynastic history. Under their wise and benevolent rule, there was a flourishing in arts, culture, architecture and innovation.

The Imperial Harvest QING Collection is inspired by this age of unparalleled prosperity.

Rise of Cosmopolitan Art and Architecture

The Qing emperors were themselves often skilled in painting and calligraphy, and became influential patrons to traditional art and Confucian culture. The Qianlong Emperor famously wrote thousands of poems during his lifetime, and owned a vast collection of art from China, Europe, Japan, and India.

It was also during this time that a dialogue between the artistic styles of east and west began, under the encouragement of the emperors. Italian missionary Giuseppe Castiglione arrived in China in 1715, and served as a court painter under the Kangxi, Yongzheng, and Qianlong emperors.

Castiglione adeptly applied his western training to the prevailing tastes, creating a new innovative style of court painting. He became so respected that he was even appointed as an official of the third-rank by the Emperor. 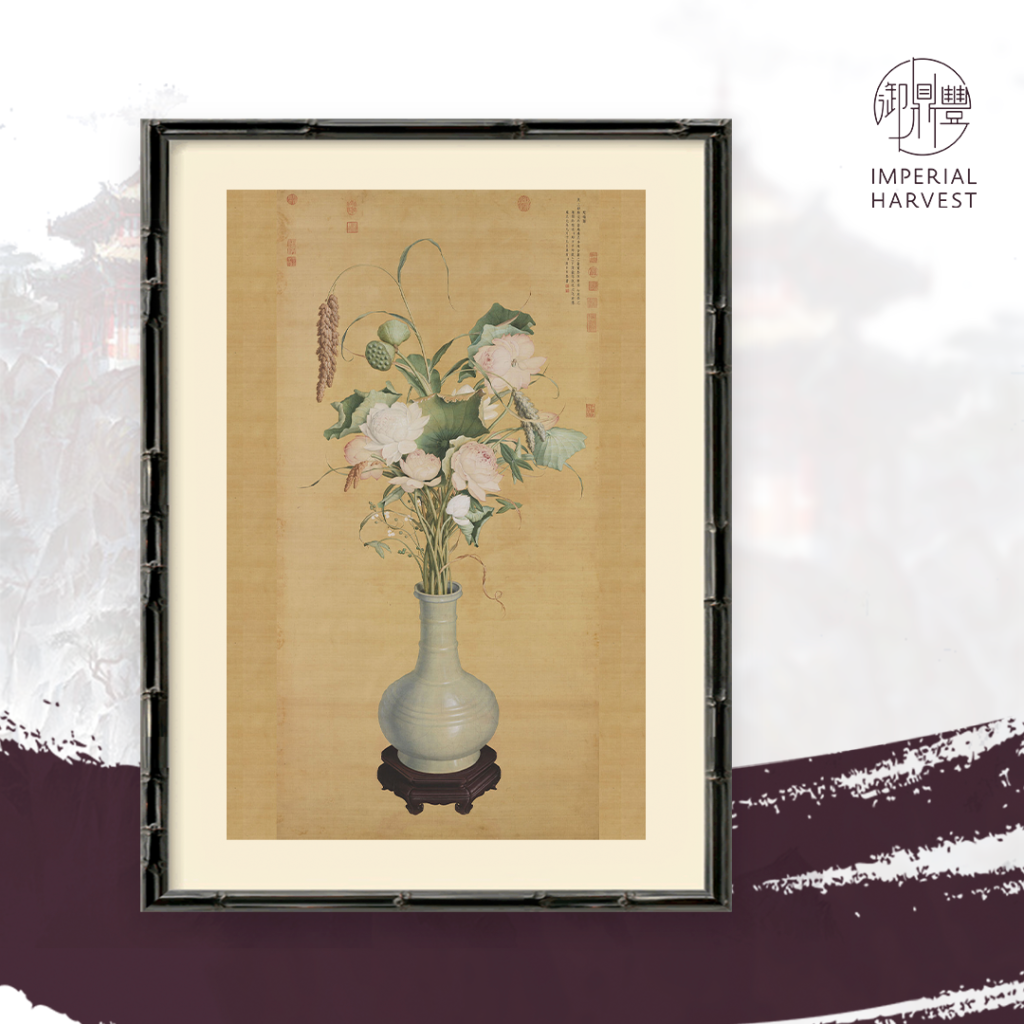 One of the earliest known paintings by Giuseppe Castiglione blends Chinese and Western styles, 1723

The Qianlong Emperor’s taste for a harmonious fusion of Eastern and Western artistic styles would eventually find its way into royal architecture. In 1747, the Emperor commissioned Castiglione for the design and construction of the Western-Style Palaces in the imperial gardens of the Old Summer Palace with assistance from other Jesuits such as Jean-Denis Attiret. 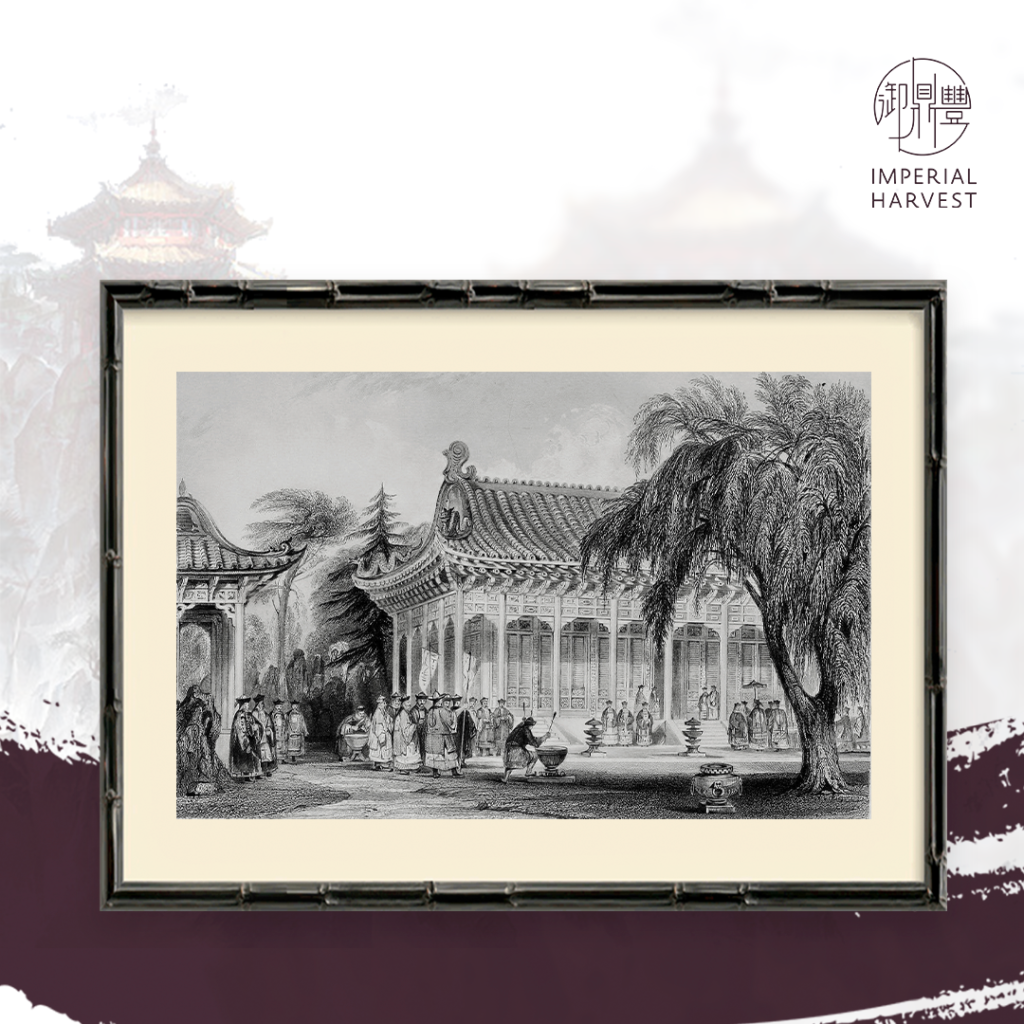 A historic drawing of the Old Summer Palace designed and built by Giuseppe Castiglione. The architecture incorporated both Eastern and Western artistic styles

He also commissioned the French Jesuit Michel Benoist to design a series of timed waterworks and fountains complete with underground machinery and pipes for the amusement of the imperial family.

The Evolution of Qing Imperial Jewellery

Before Emperors Kangxi and Qianlong, Qing imperial jewellery served the sole purpose of blessing the wearer with safety, good fortune, and longevity. This was achieved through the use of auspicious motifs and natural materials.

To reinforce the superiority of the imperial family, Qing imperial jewellery would incorporate aspects from other ethnic groups into their Manchu traditions. This meant the use of precious gold, gemstones, jewels, and woods to create traditional yet visually diverse Manchu motifs. Dong pearls were particularly favoured as they came from the ancestral homeland of the Manchus. 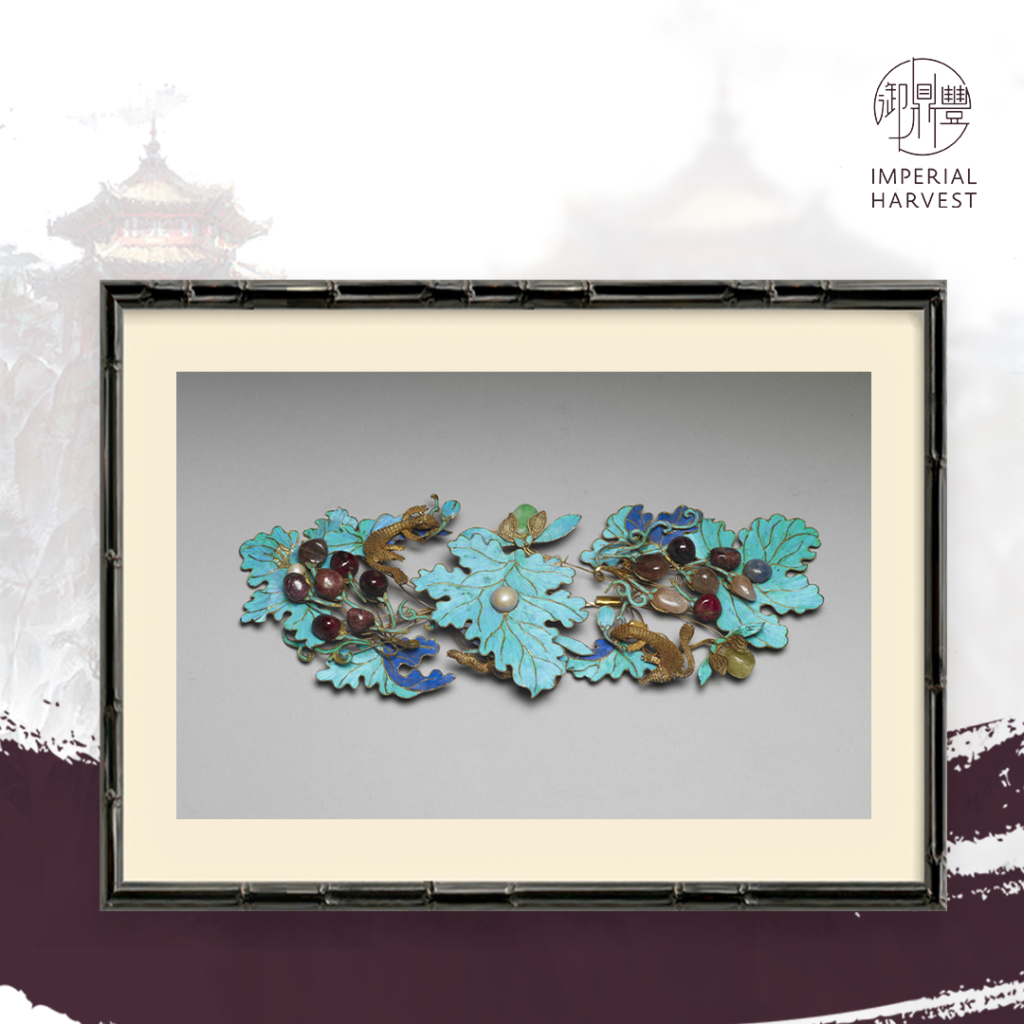 Gilt hairpin worn by Manchu women during the Qing Dynasty

From the time of Emperors Kangxi and Qianlong, the jewellery of the Qing Court became increasingly lavish, fashion-focused and started to take on an east-meets-west aesthetic. Whilst jewellery pieces produced for Imperial Rites continued to adhere strictly to traditional Imperial  standards, fashionable jewellery for Manchu women began to evolve and incorporate Western jewellery techniques such as lapidary, enameling, and inlay. 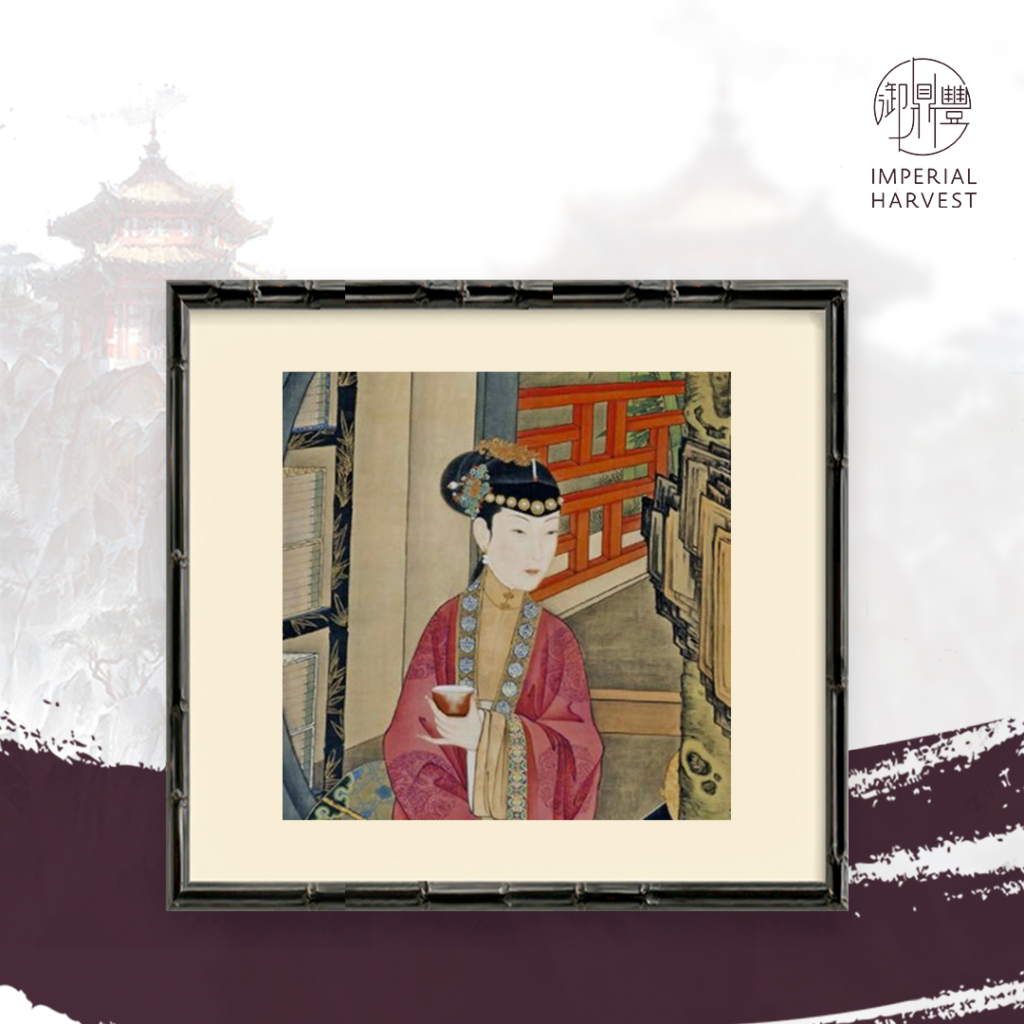 Gold was a favoured material as a glimmering representation of money and prosperity. Jewellery pieces were often adorned with precious gemstones.

The use of natural materials and the pursuit of elegance led to graceful curves and fluid compositions, exemplified by the deceptively simple rosary. It was common for Qing men and women to wear long prayer beads. Each bead, crafted from precious wood, was perfectly round. Yet with other beads, they form an endless loop that gracefully hung around the neck, representing the nature cycle of life. 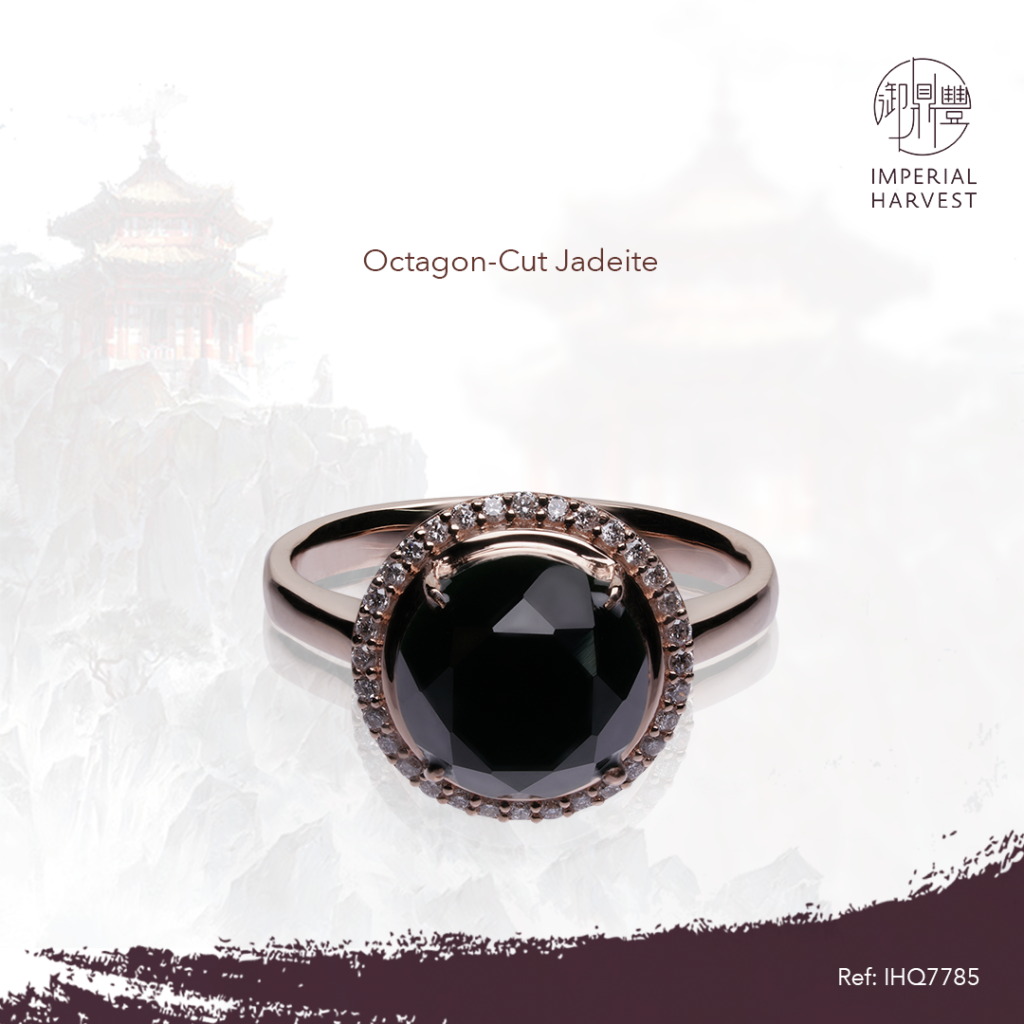 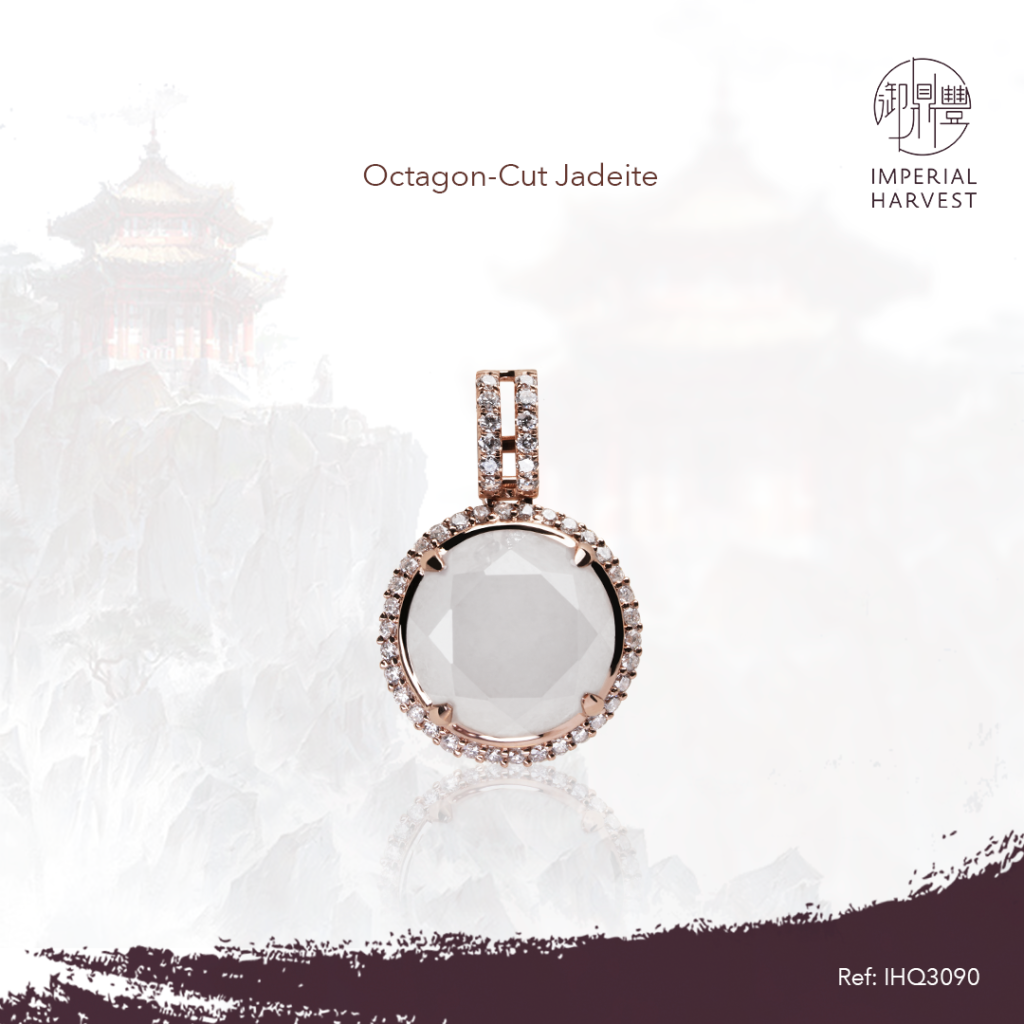 Imperial Harvest’s patented octagon-cut jadeite cabochon boasts eight iconic chamfered edges, paying tribute to the Eight Trigrams (Bagua). Just as the Eight Trigrams are building blocks of the Chinese civilization, this stunning design by Master David empowers the wearer to be the architect of their own future and the master of their own destiny.

The study of the Eight Trigrams is carefully documented in the Book of Change – an important classic revered through the ages. The Eight Trigrams were applied extensively in the development of architecture, traditional Chinese medicine, Feng Shui, philosophy and martial arts. “Early Heaven” Bagua was used in the planning of the locations of the most significant sites for Imperial worships – the Temples of Heaven, Earth, Sun and Moon in Beijing. 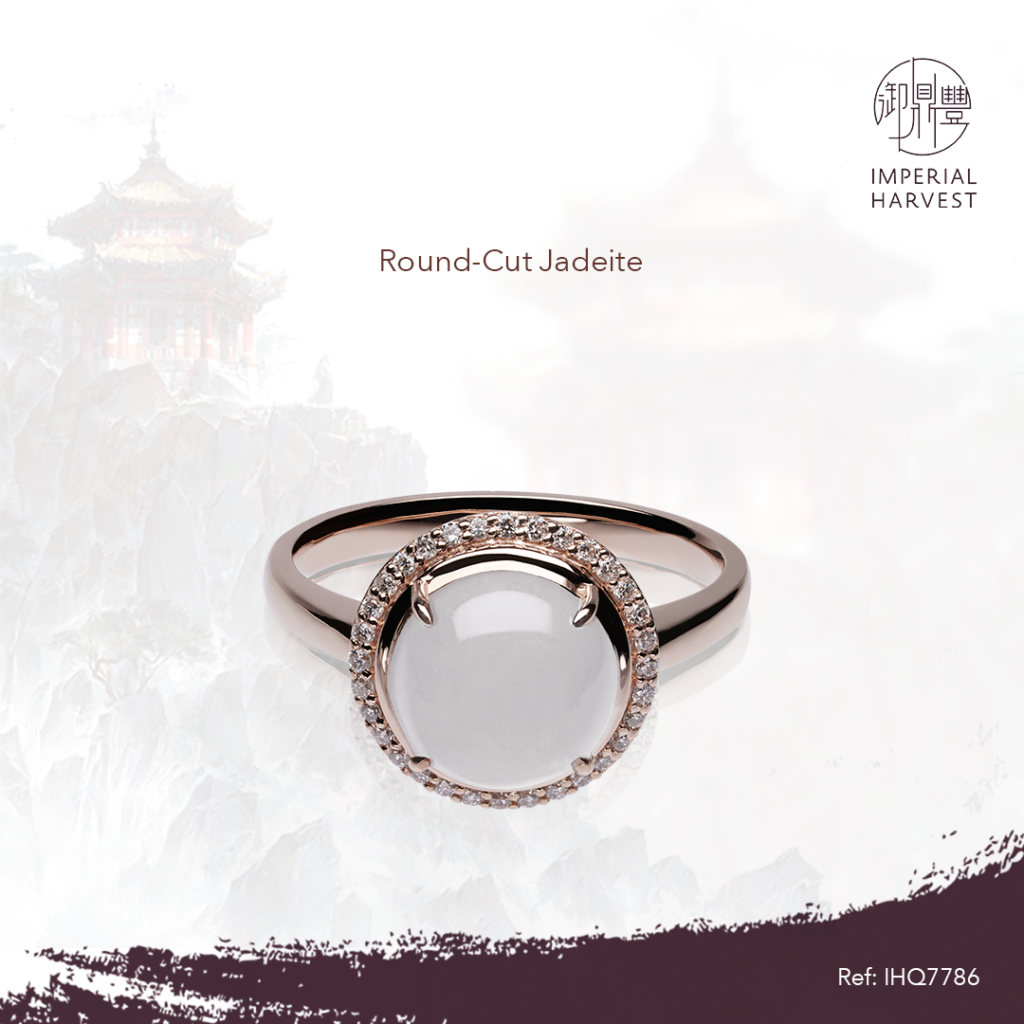 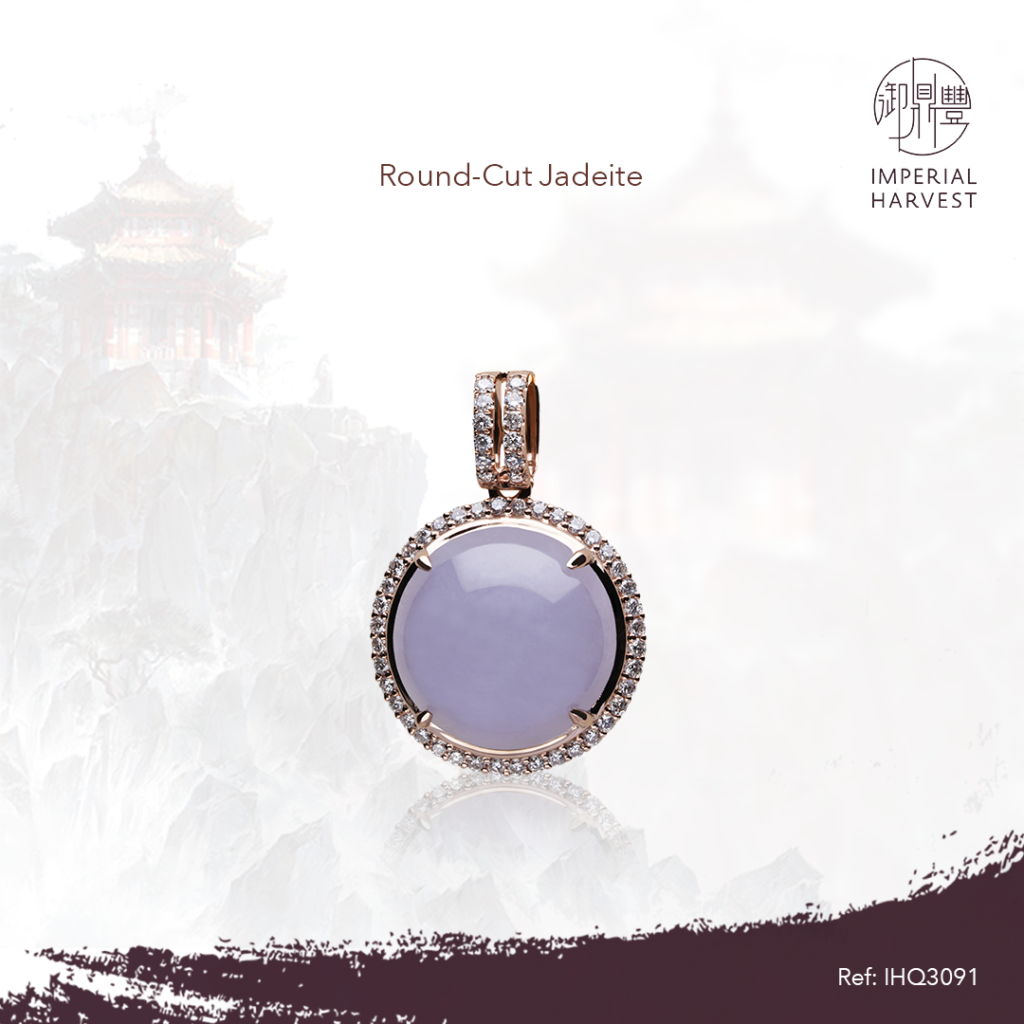 Our round-cut jadeite cabochon is an elegantly shaped jadeite cabochon that displays the highest level of natural beauty and brilliance. It also emphasizes the translucency of the jadeite and its interaction with light.

It is inspired by the Chinese geographical philosophy of a ‘Round Heaven and Square Earth’ (天圆地方), which has influenced the design of Chinese currency (round bronze coins with square holes) and the most iconic buildings in China such as the Temple of Heaven and the Imperial Palace.

The round-cut jadeite empowers the wearer to achieve all-rounded success in their career, business, investment, relationships and health. 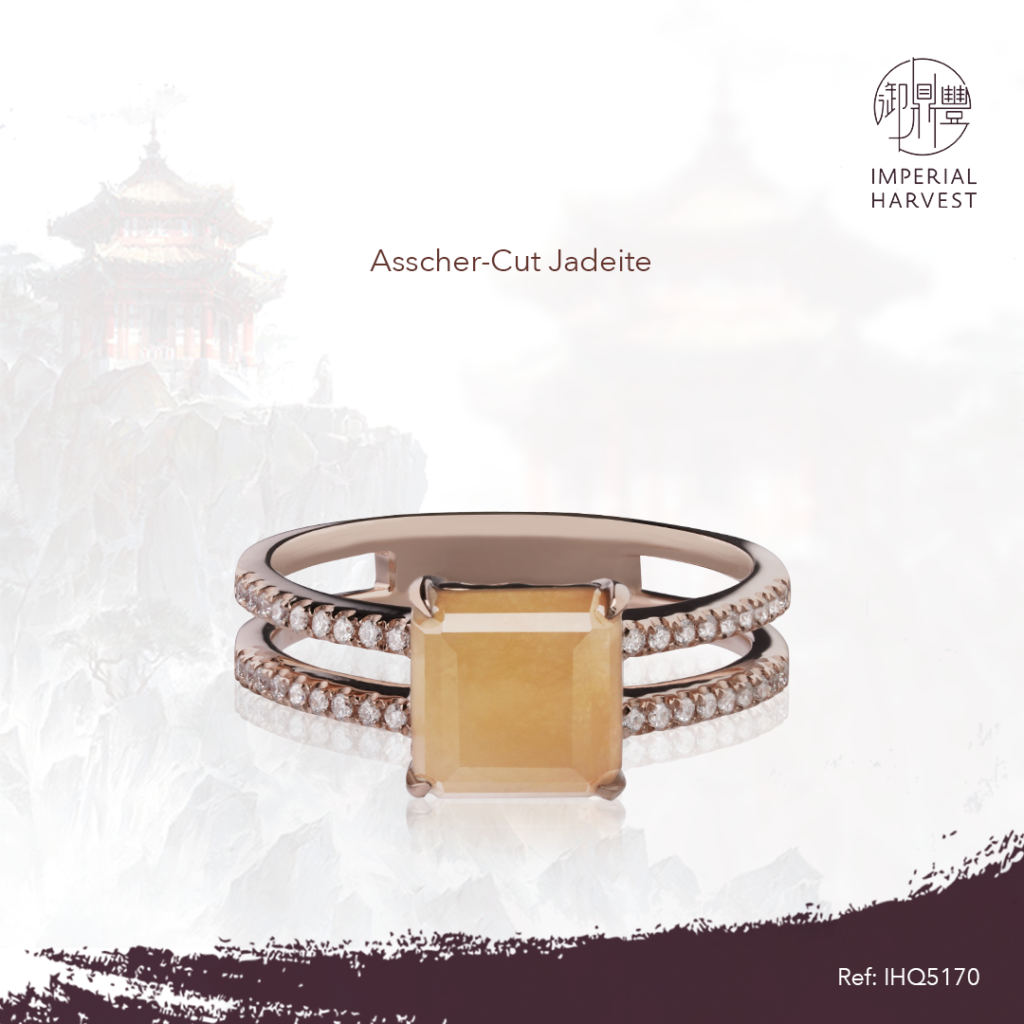 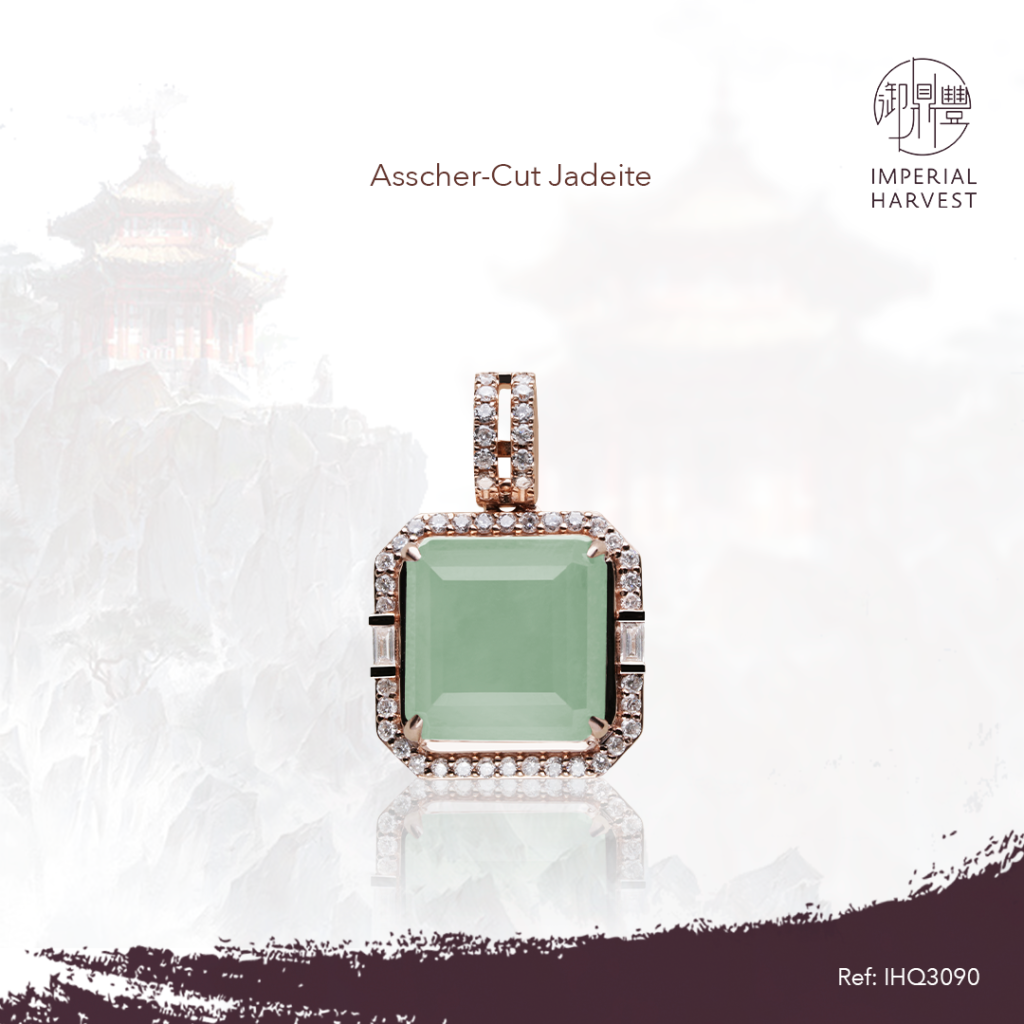 The exquisite asscher-cut jadeite cabochon is classically proportioned. Its multiple order of symmetry presents it with a dignified and stately presence.

It represents the Earth in Chinese philosophical tradition of a ‘Round Heaven and Square Earth’ (天圆地方). The concept of a square earth can be found in the architecture of a “siheyuan” (四合院) which formed the basic pattern used for royal palaces, religious temples, and civilian residences.

Just as the earth provides a nurturing environment for growth and progress, the asscher-cut cabochon lays a solid foundation for the wearer to achieve future success. 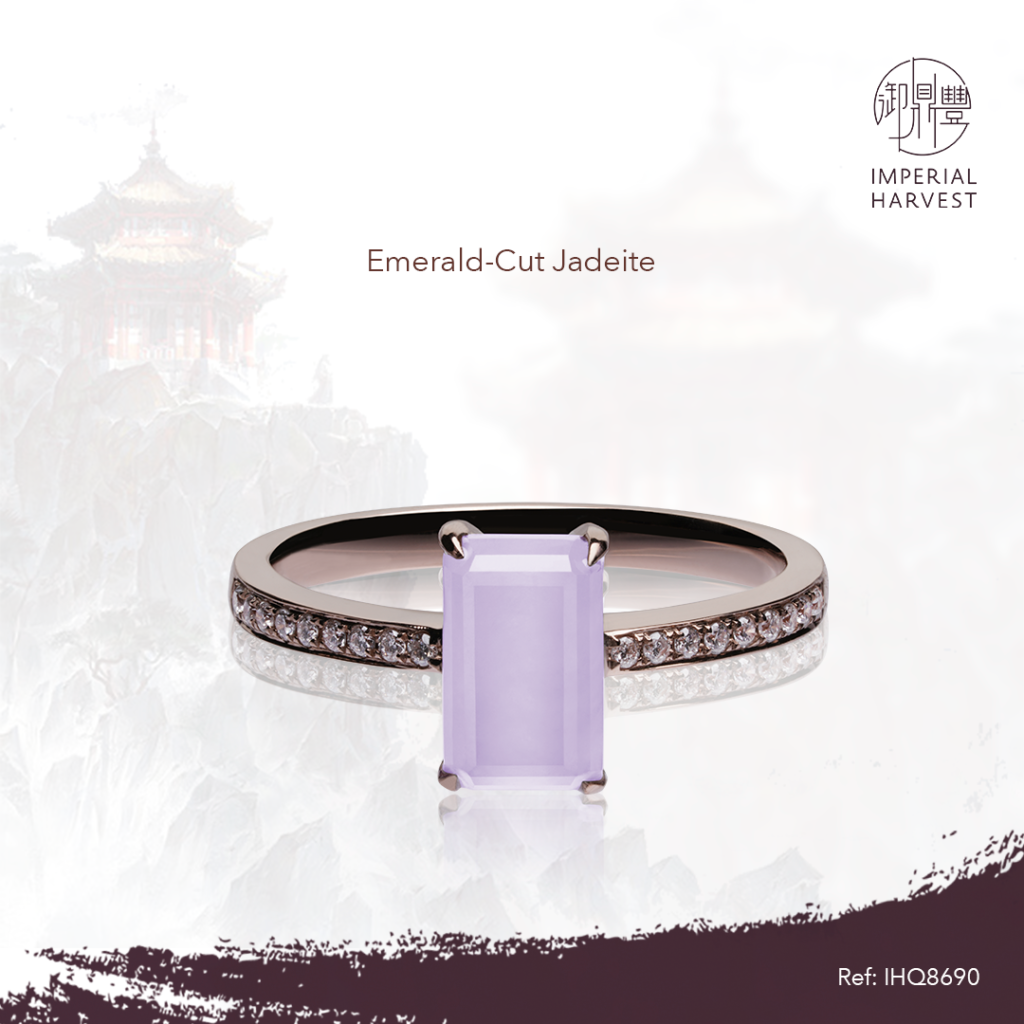 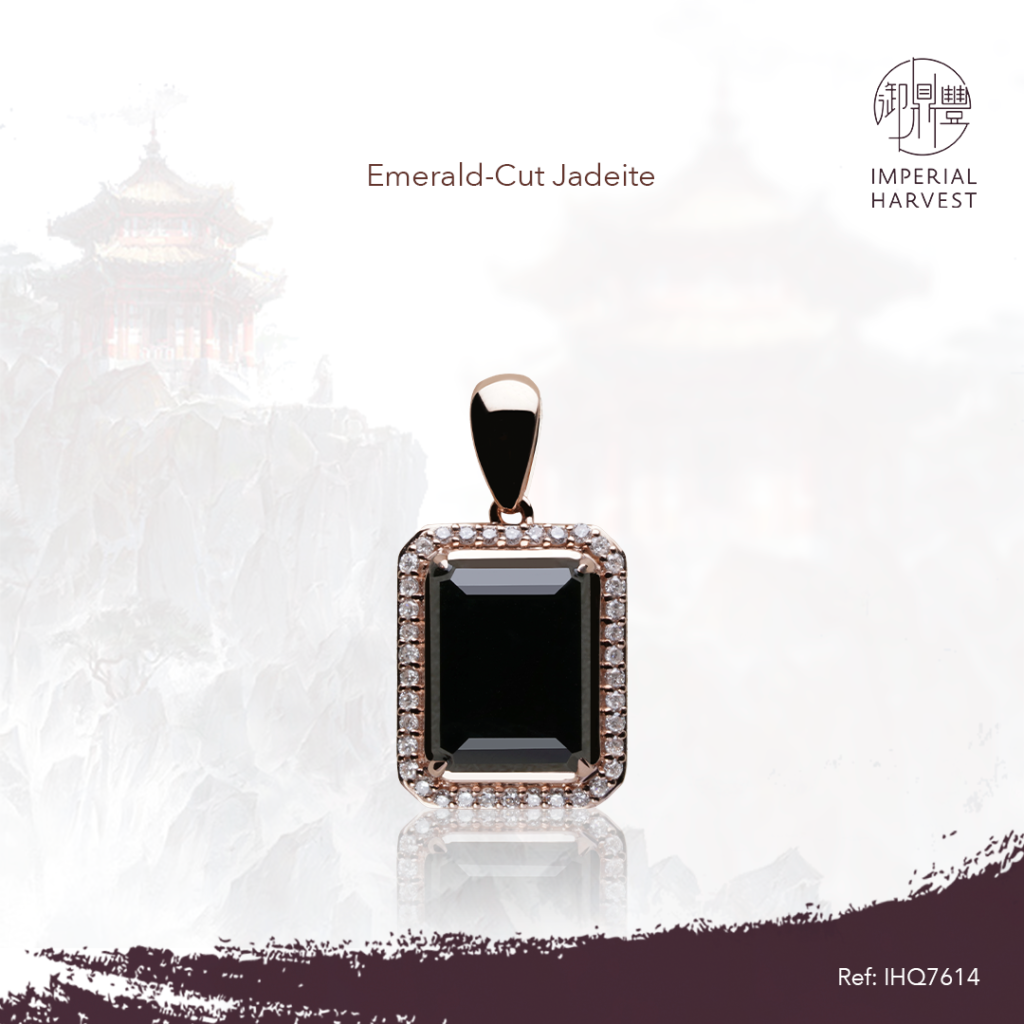 In Chinese numerology, odd numbers are considered heavenly. The three tiers of the cabochon represent the three flights of steps that the Emperor ascends up the Circular Mound Altar in the Temple of Heaven during the Summer solstice to pray for blessings of rain.

A journey of a thousand miles begins with a single step. Our emerald cut cabochon inspires the wearer to step up to the challenge, scale the heights in life, and reach the very top. 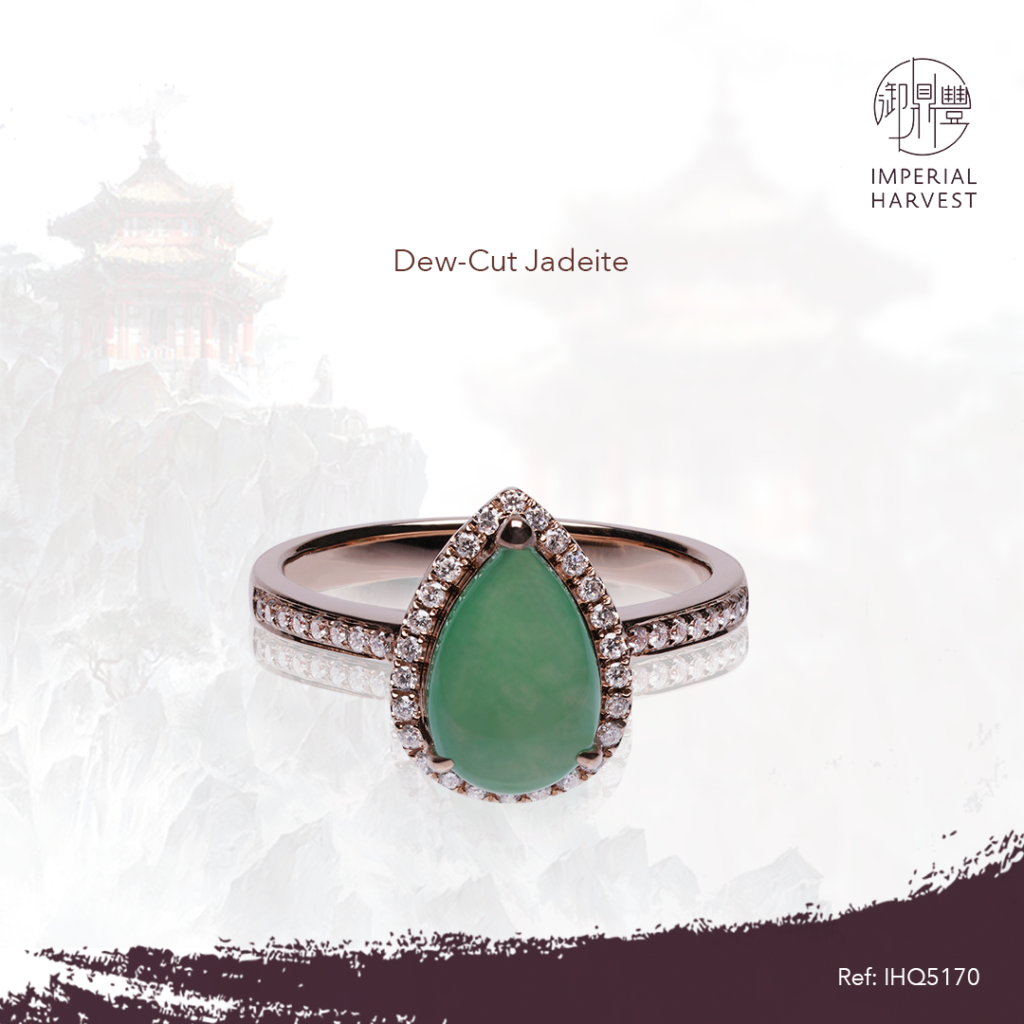 Imperial Harvest’s dew-cut jadeite cabochon represents a raindrop – the dew of heaven. It is the gift from above, the source of all life on earth.

For centuries, agriculture formed the economic backbone of civilisations. A bountiful harvest was a strong indication that the Emperor enjoyed a strong mandate of Heaven for his rule. Hence during the Summer solstice, the Emperor would pray for a blessing of rain at the Circular Mound Altar within the Temple of Heaven.

The dew-cut jadeite cabochon blesses the wearer with abundance and prosperity, every day of their life.

Imperial Harvest QING Collection pays tributes to the fashion and philosophy of the Qing Golden Age and expresses the natural beauty of three precious materials – gold, jadeite, and diamonds.

Our brilliantly cut diamonds that adorn the collection are a modern interpretation of the beads that characterised Qing dynasty imperial fashion. Like the beads, the elegant fluidity found in the design of our QING Collection represents everlasting longevity and prosperity.

490 years of Summer Solstice Celebrations at the Temple of Earth