Posted by Imperial Harvest on 17 December 2021

For centuries, precious gems such as diamonds and rubies have been mainstays of high fashion in the west. Such treasures have come to be widely recognized as highly visible status symbols and markers of success.

Closer to home, jade has traditionally been the gemstone of choice in Oriental nobility circles. This was especially so in ancient China, where it was revered as an indicator of imperial spirituality, purity and health for over 9,000 years throughout its dynastic history. Reflecting the prized status of exquisite jadeite treasures, they have been worn exclusively as a badge of honour and prestige by Chinese royalty and the ruling elite. It is indeed telling that the Chinese character for “emperor” or “royalty”, “王”, appears almost identical to the character for “jade”, “玉”.

According to Imperial Feng Shui principles, jadeite is a key component of the suite of earthly treasures used to empower practitioners in achieving their unlimited human potential. Given the prominence of this cherished art in the fortunes of ancient Chinese empires, it comes as no surprise that jadeite treasures were hugely popular and widely found across the imperial court.

Generations of Chinese emperors favoured Imperial Feng Shui for its unwavering focus on creating favourable luck and outcomes. This contrasted sharply with other schools of thought which were often more complex or detached from the stark realities encountered in everyday life. Too often, these alternative frameworks called for highly impractical courses of action, and embodied a frustrating passivity towards designing one’s desired destiny. 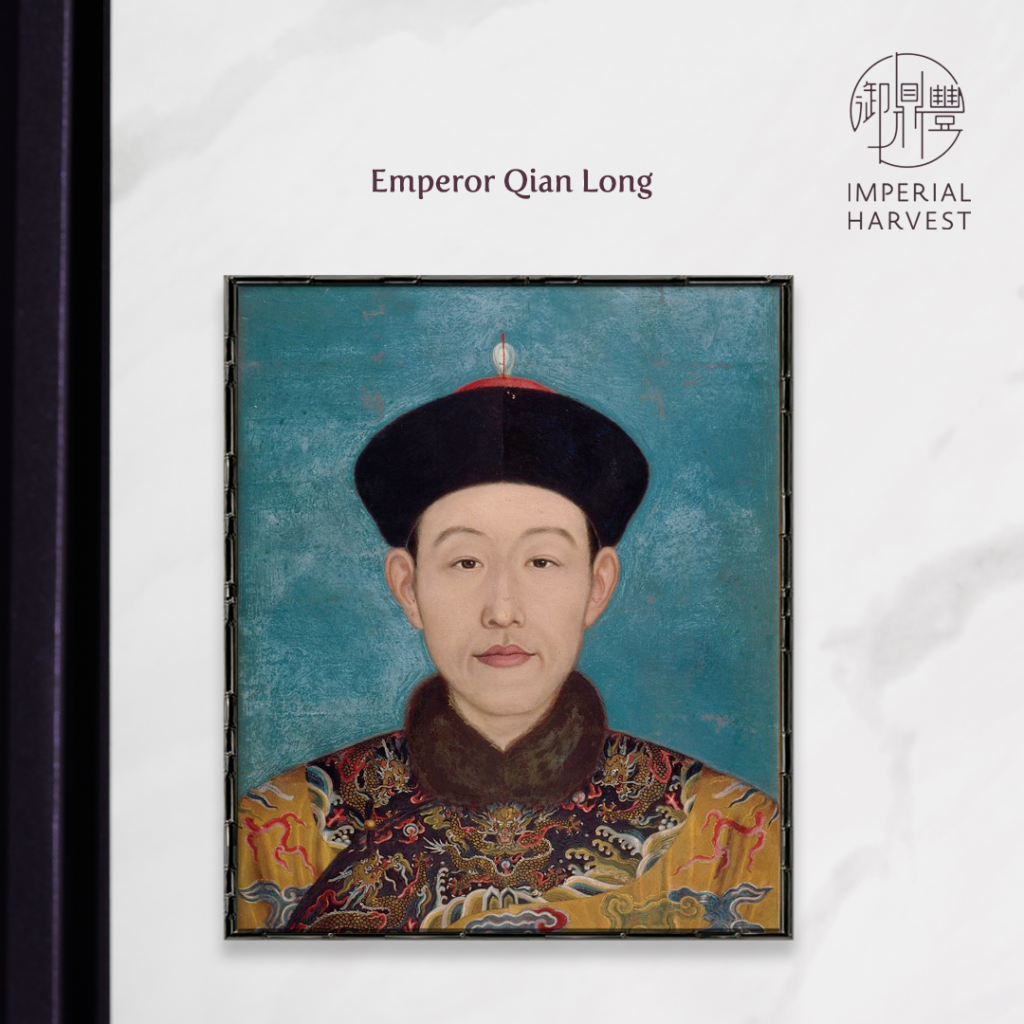 Emperor Qian Long (乾隆) of the Qing dynasty was one of the most renowned and prominent advocates of Imperial Feng Shui. With his eminence and foresight, he recognized the tremendous benefits to be reaped by subscribing to its simplicity, practicality and effectiveness. His illustrious reign, which was heavily guided by Imperial Feng Shui principles, set the stage for the Qing dynasty’s everlasting abundance and prosperity. 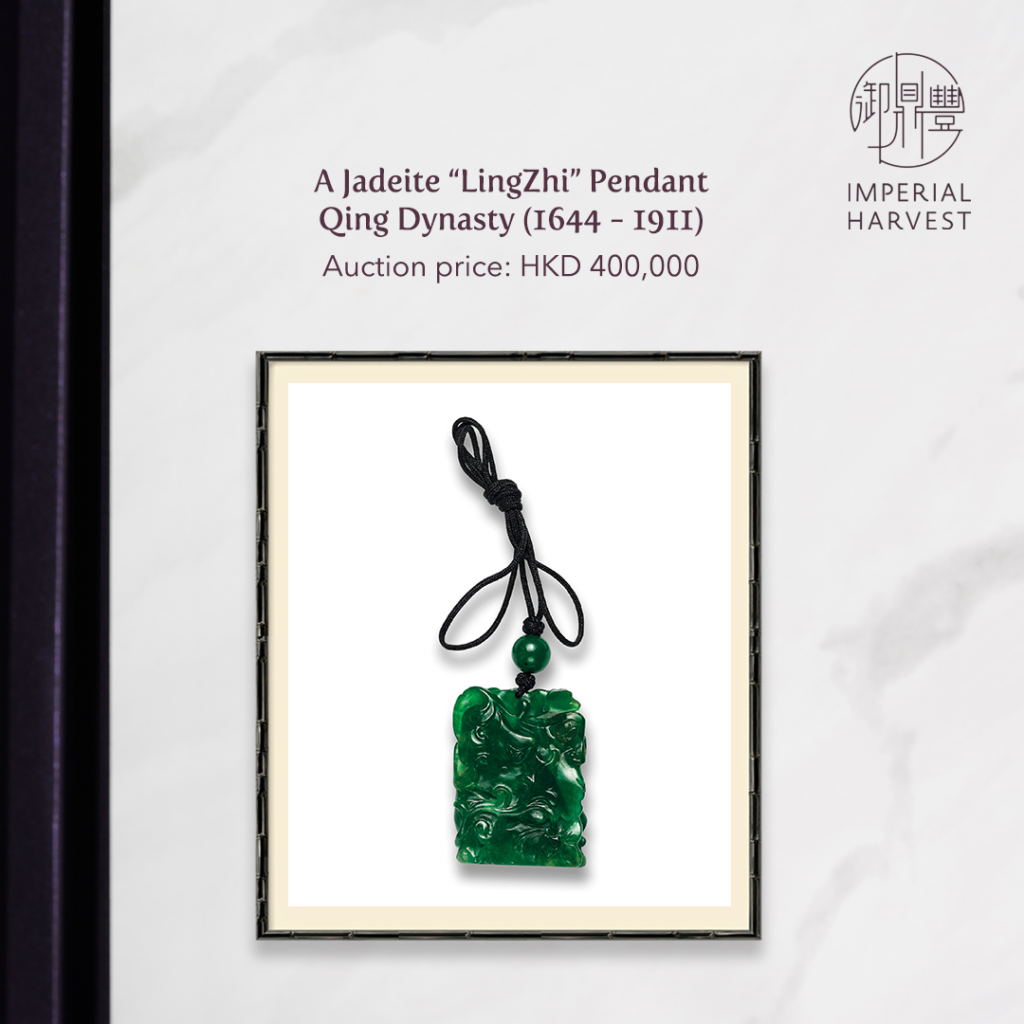 Among the treasures employed by Emperor Qian Long’s Imperial Feng Shui masters were highly prized artefacts such as agarwood, sandalwood and carefully curated varieties of natural crystals. The cornerstone of the Imperial Feng Shui treasures in Emperor Qian Long’s court, however, were the fine Burmese jadeites that liberally graced the hallways, forming the bedrock of his distinguished rule.

Drawing on the findings of Emperor Qian Long’s Imperial Feng Shui masters, Imperial Harvest’s jadeite pendants adroitly balance the major yin. Achieving an optimal balance of this phenomenon, destined owners are blessed with an abundance of good personal luck throughout their personal and professional endeavours.

On the other hand, the Imperial Harvest jadeite cabochon collection ensures one’s minor yang is perfectly balanced, bestowing upon the blessed wearer a highly-intuitive presence of mind. Intuition is critical for decision-making in the face of ambiguity and a lack of reliable data, empowering one to seize first-mover advantages where others hesitate.

As early as their conceptualization, these jadeite treasures are destined for excellence. Their detailed design elements are meticulously produced and reviewed, undergoing extensive refinement and revision in the pursuit of perfection. In the production workshop and studio, master artisans armed with generations of expertise cut and carve according to Master David’s inspired vision. Time-honoured hand polishing and sculpting craftsmanship is seamlessly married with cutting edge tools of the trade, allowing for the incorporation of state-of-the-art techniques and technologies. Clean and classic proportions collide and meld with intricate guillochéd patterns – a testament to the unparalleled Imperial Harvest finesse in detailed etching and engraving. 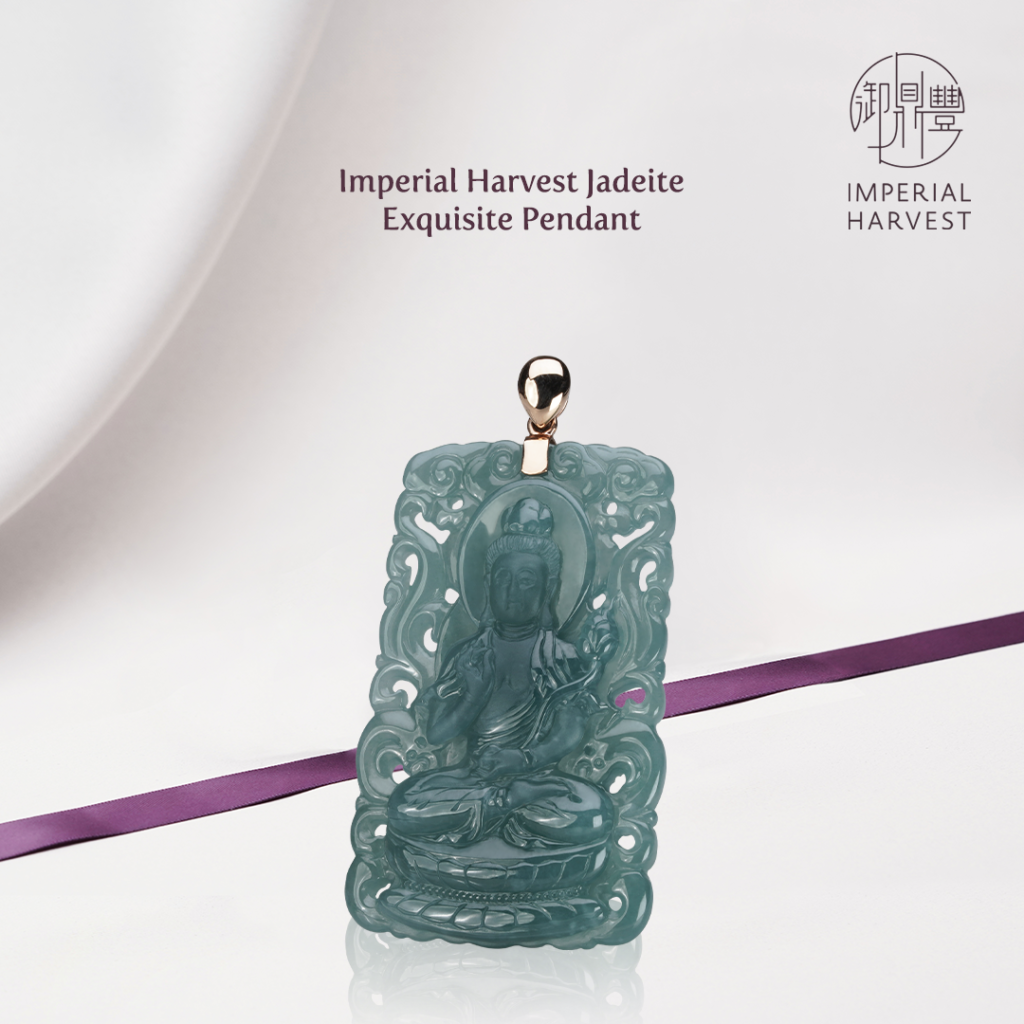 The result – contemporary jadeite treasures in the most luxurious and intricate forms, yet grounded in the storied heritage of Imperial Feng Shui.

The Five Wealth Gods collection, for instance, is one of the mainstays of Imperial Harvest’s classic fine jadeite pendants. Each of the five first undergoes extensive research, to ensure that key elements of the deity’s life are accurately captured. These are then painstakingly sketched to perfection, with the resulting artwork reflecting the richness of each deity’s features and prosperity tools in remarkable detail. 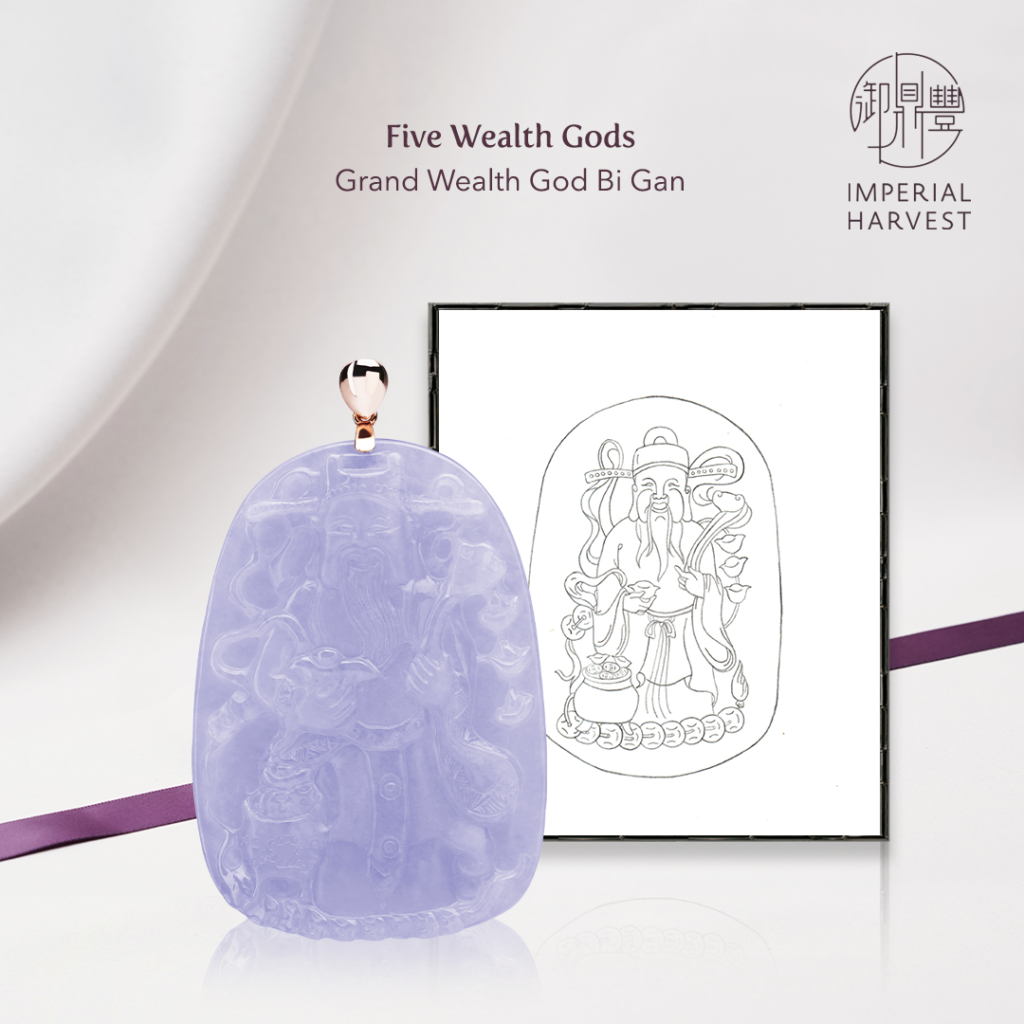 Each Imperial Harvest jadeite treasure is truly one-of-a-kind – its quality and design undergoes stringent certification before being endorsed. Detailed records of each treasure, such its unique dimensions and design features, are made and presented to the destined owner, providing affirmation of its authenticity and flawless craftsmanship. 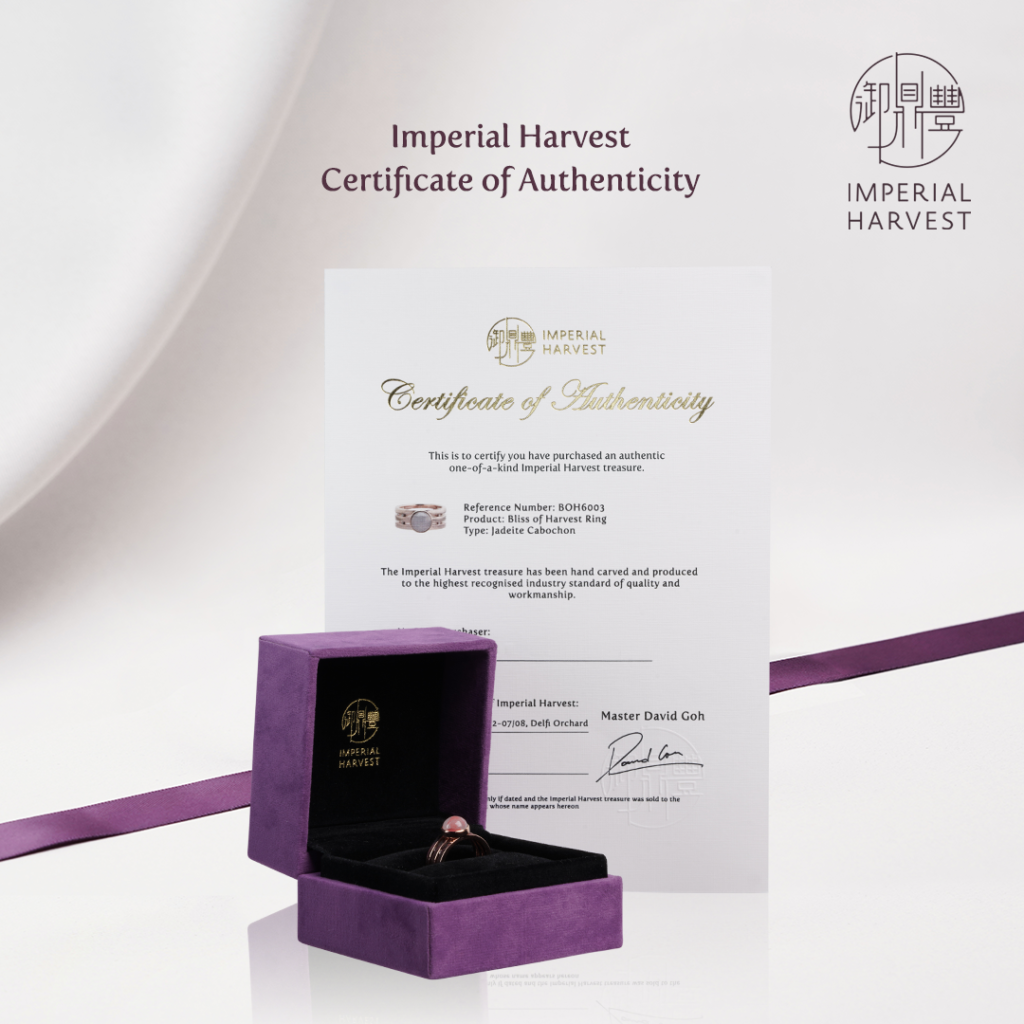 Imperial Harvest caters to the various elemental balances of diverse Bazi charts. All five elemental colours are available, and are prescribed according to the lifetime favourable elements reflected in the client’s Bazi chart.

Upon being acquired, every Imperial Harvest jadeite treasure undergoes a thorough blessing session conducted by Master David himself. This takes place on a date that is most favourable for each client’s unique circumstances. The time of blessing is also carefully selected, based on Vedic Astrology, San Yuan Qi Men Dun Jia and insights from clients’ personal Bazi charts. This imbues each jadeite treasure with optimal auspicious energies, and empowers destined owners in achieving their innate unlimited human potential. 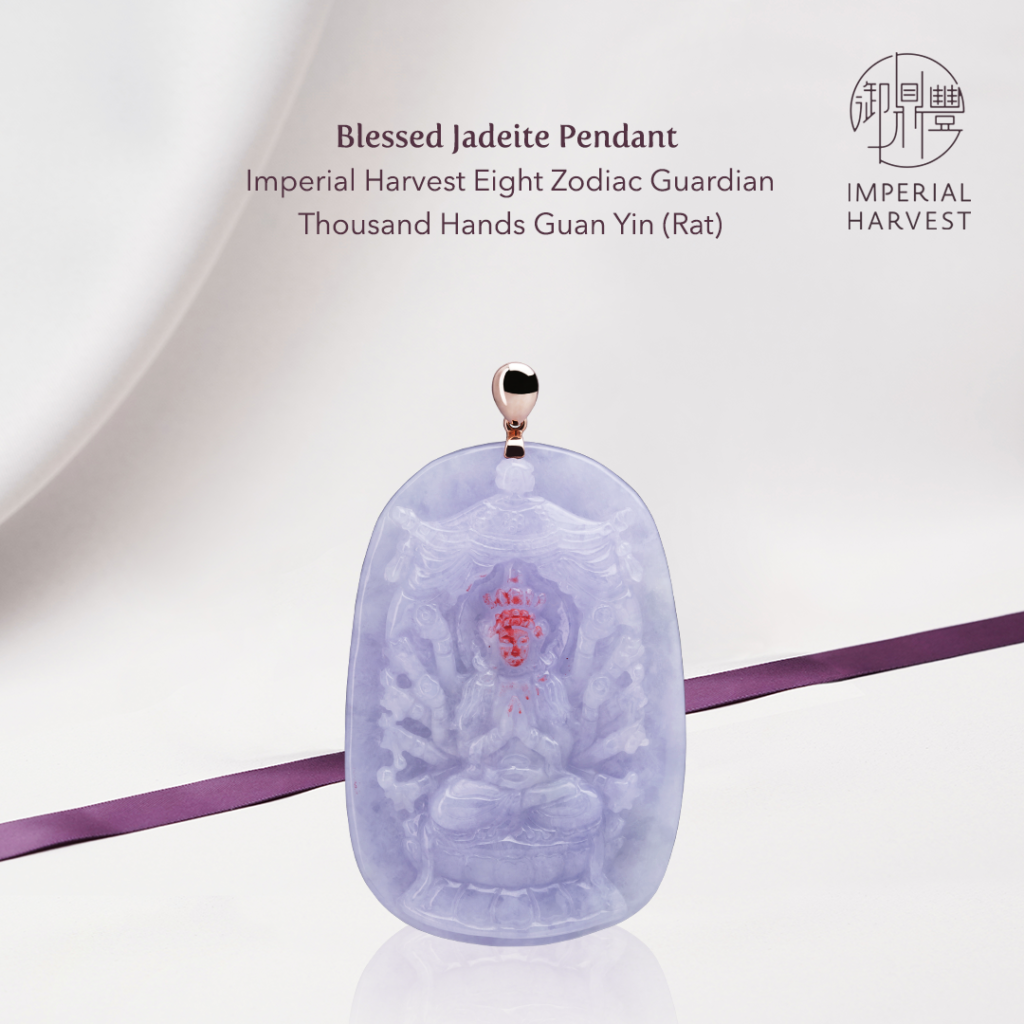 Central to the blessing ceremony is the specially concocted vermilion (开光朱砂), which consists of Imperial Feng Shui staples such as pure cinnabar powder (朱砂粉), agarwood oil (沉香油) and sandalwood oil (檀香油). These are ground with 24K gold foil 金箔 atop an Imperial White Inkstone (御用白端砚) to amplify the jadeite’s heavenly and prosperous energies. Throughout Master David’s blessings, the auspicious energies from these cherished ingredients are imparted to the jadeite treasures on which they are applied.

As a trailblazing connoisseur and creator of jadeite showpieces, Master David captures the world’s imagination with the exquisite Imperial Harvest jadeite collection. Imbued with his tri-generational heritage of Imperial Feng Shui wisdom and expertise, these fine jadeite treasures robustly enrich and empower the life of every Imperial Harvest client. Indeed, they are integral to the Imperial Harvest mission of prospering every generation with the world’s finest jadeites – bearing the quality and potency of those employed by Emperor Qian Long almost 300 years ago.