Posted by Imperial Harvest on 21 October 2022

History and Heritage of the Imperial White Inkstone

Sited opposite the city centre in Zhaoqing City, Guangdong is the famous Seven Star Crags (七星岩), a destination renowned for its inkstones. The inkstones originating from the Seven Star Crags came in a variety of colours, with the rarest of them being white — occupying a mere 0.02% of all inkstones mined. Their inherent exclusivity meant that they were reserved for the ruling elite of ancient China, with Imperial Feng Shui masters leveraging the properties of the inkstones to empower the royals with authority and legitimacy.

Emperor Qian Long attributed the success of the Qing dynasty to steadfast adherence to authentic Imperial Feng Shui principles. According to historical records and accounts, Emperor Qian Long commissioned a variety of inkstones for his day-to-day use. These inkstones featured classical designs inspired by his vast collection of fine art and excerpts of his poetry. During the long and illustrious reign of Emperor Qian Long, these magnificent earthly treasures were the epitome of his patronage of the arts, as well as his unwavering commitment to upholding the tenets of Imperial Feng Shui. 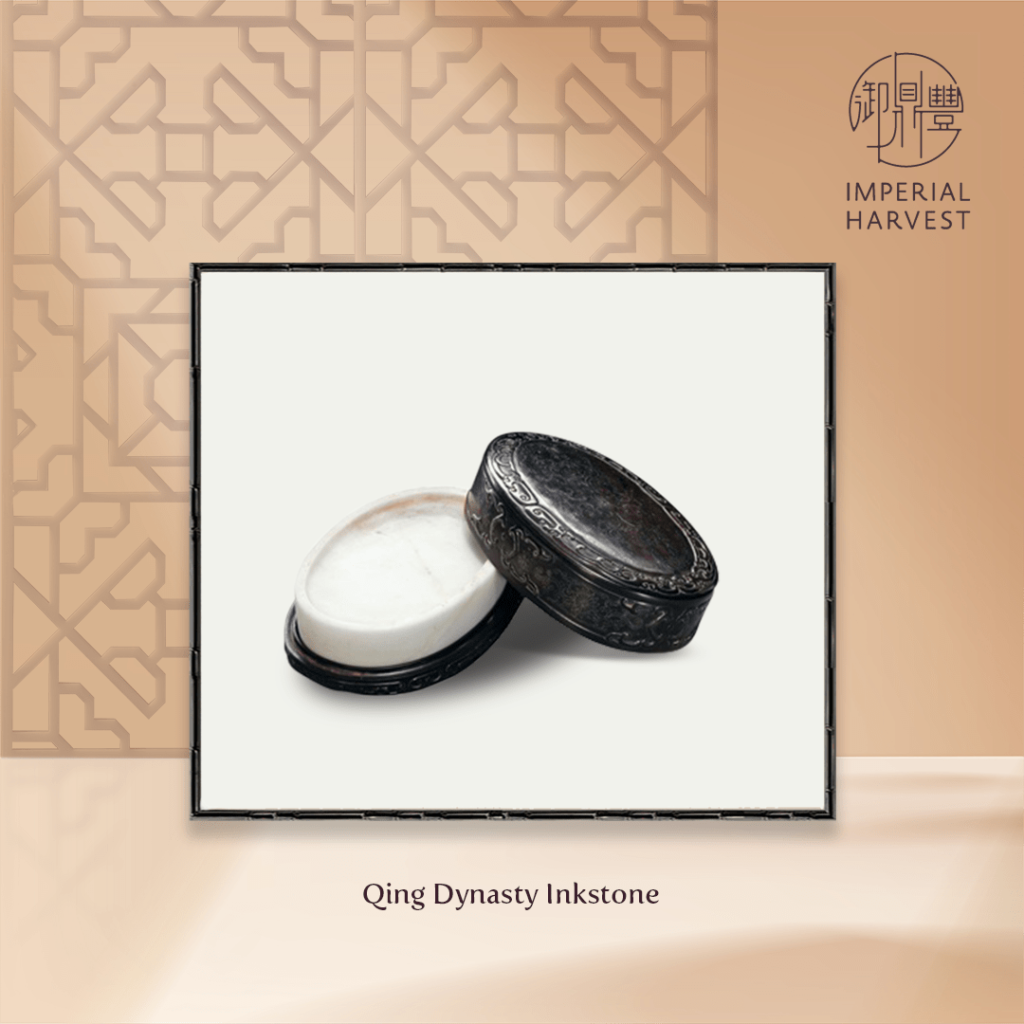 As part of his day-to-day duties in overseeing the governance of the empire, Emperor Qian Long was known to have used these specific types of stones to grind the specially concocted vermilion cinnabar paste he used in his imperial seal while reviewing daily state affairs.

It was thought that this meditative state allowed Emperor Qian Long to focus his thoughts and deliberations on making inspired decisions for the empire’s success, empowering him with intuition, benefactor luck and wisdom. Under Emperor Qian Long’s eminent reign, the Qing Dynasty became one of the most successful and longest-lasting dynasties in ancient China, spanning an unprecedented 268 years. 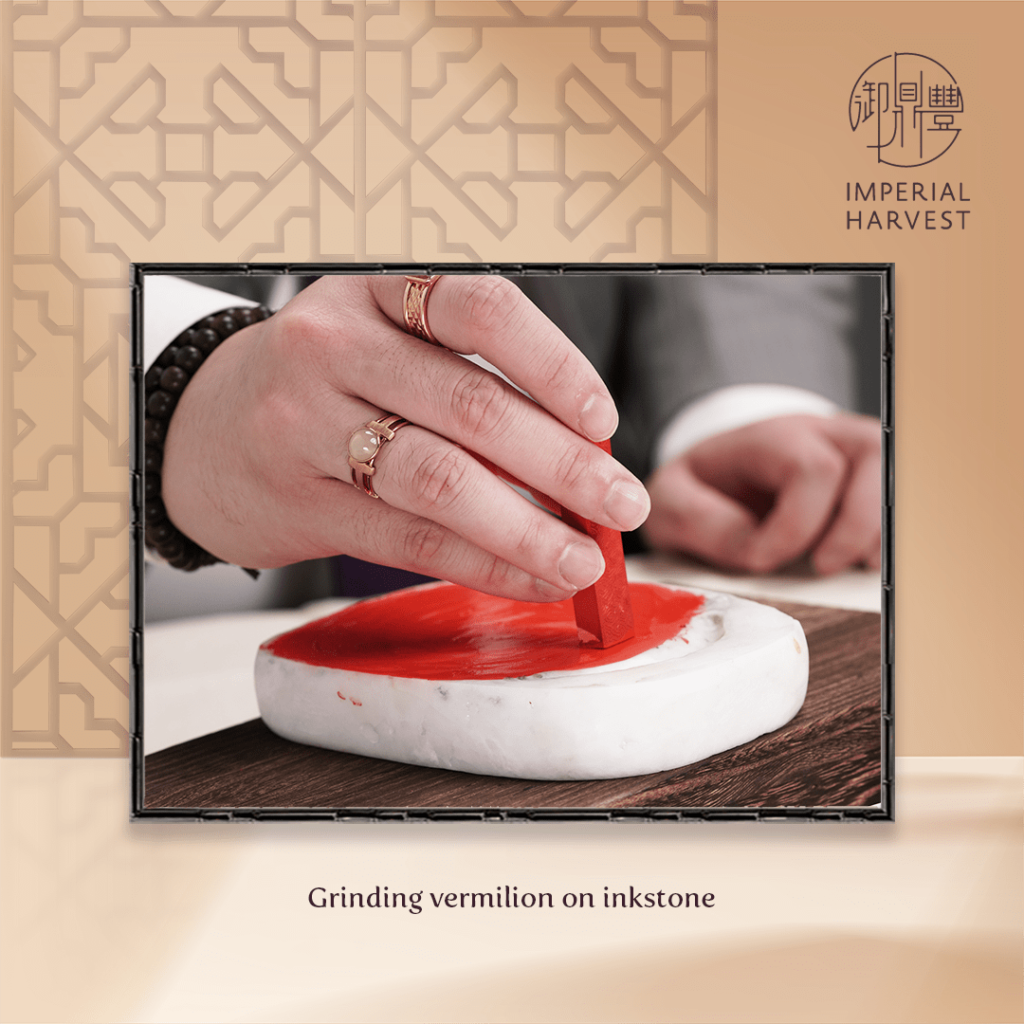 The installation of such inkstones not only addresses the problems arising from the missing sectors, it additionally counteracts the ill effects of Sha Qi, thereby activating the authority sector in homes and offices — making the Imperial White Inkstone one of the most versatile tools in the wide array of Imperial Feng Shui treasures. 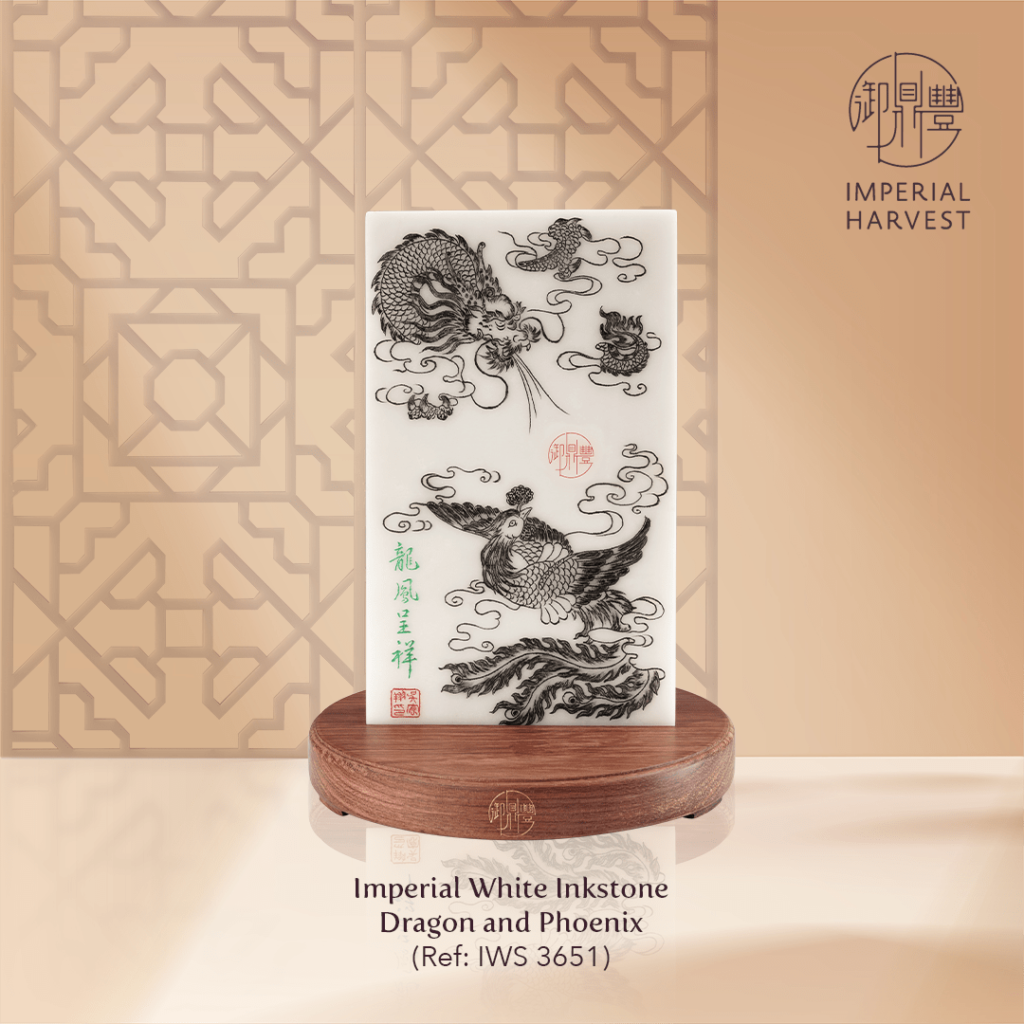 Designed with classic Imperial emblems of power and prosperity, the Imperial Harvest Imperial White Inkstone seamlessly melds traditionally oriental and western art techniques. Imperial Harvest’s team of master artisans cut and carve each inkstone, shaping them according to the most precise proportions.

The intricate ink-like detailing in each treasure is complemented by the subsequent polishing of each Imperial White Inkstone, accentuating its unique form and design — culminating in a smooth, blemish-free surface. 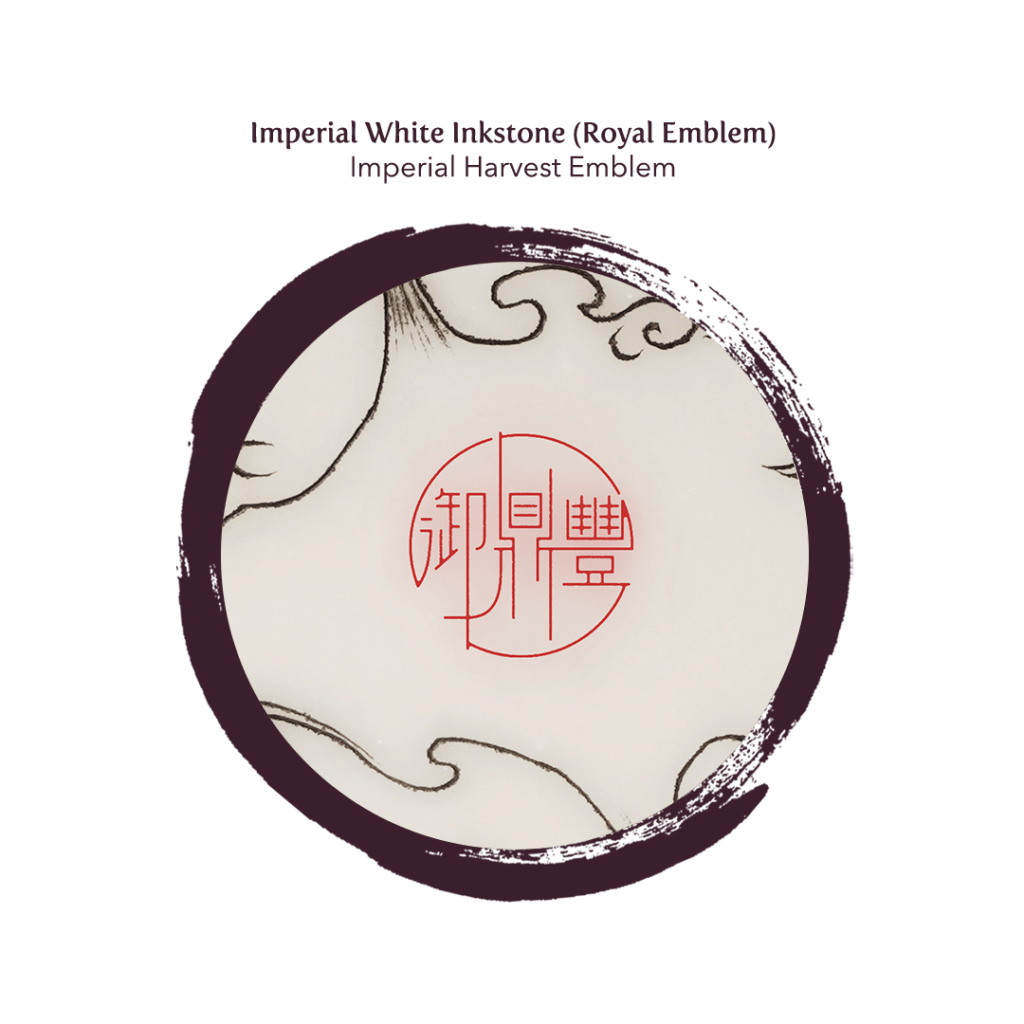 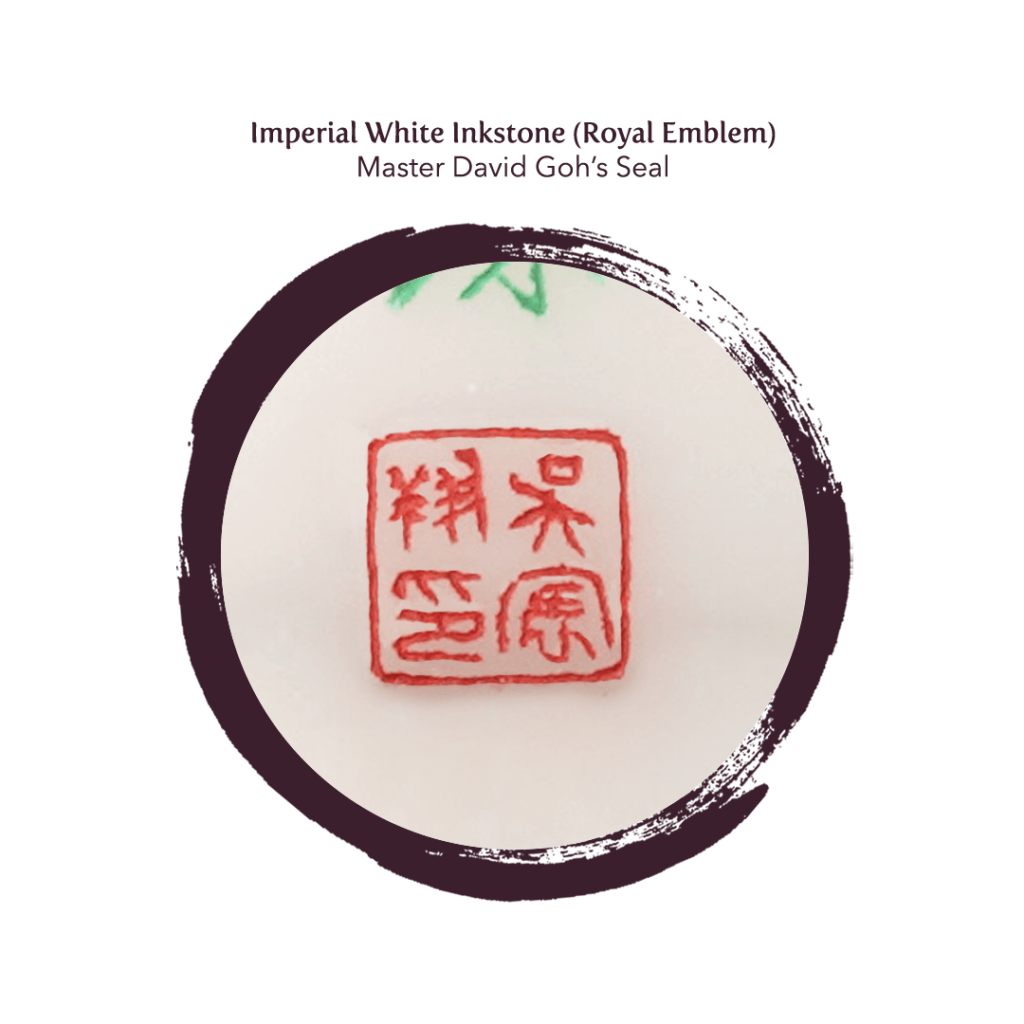 The distinguishing features that set the Royal Emblem Imperial White Inkstone collection apart from its predecessors are the two seals that occupy centre stage. A stylised rendition of the Imperial Harvest mark depicts the Imperial Harvest name in Chinese characters — a hallmark of our commitment to deeply-rooted traditions, and an embodiment of all that the brand stands for in its relentless pursuit of perfection. 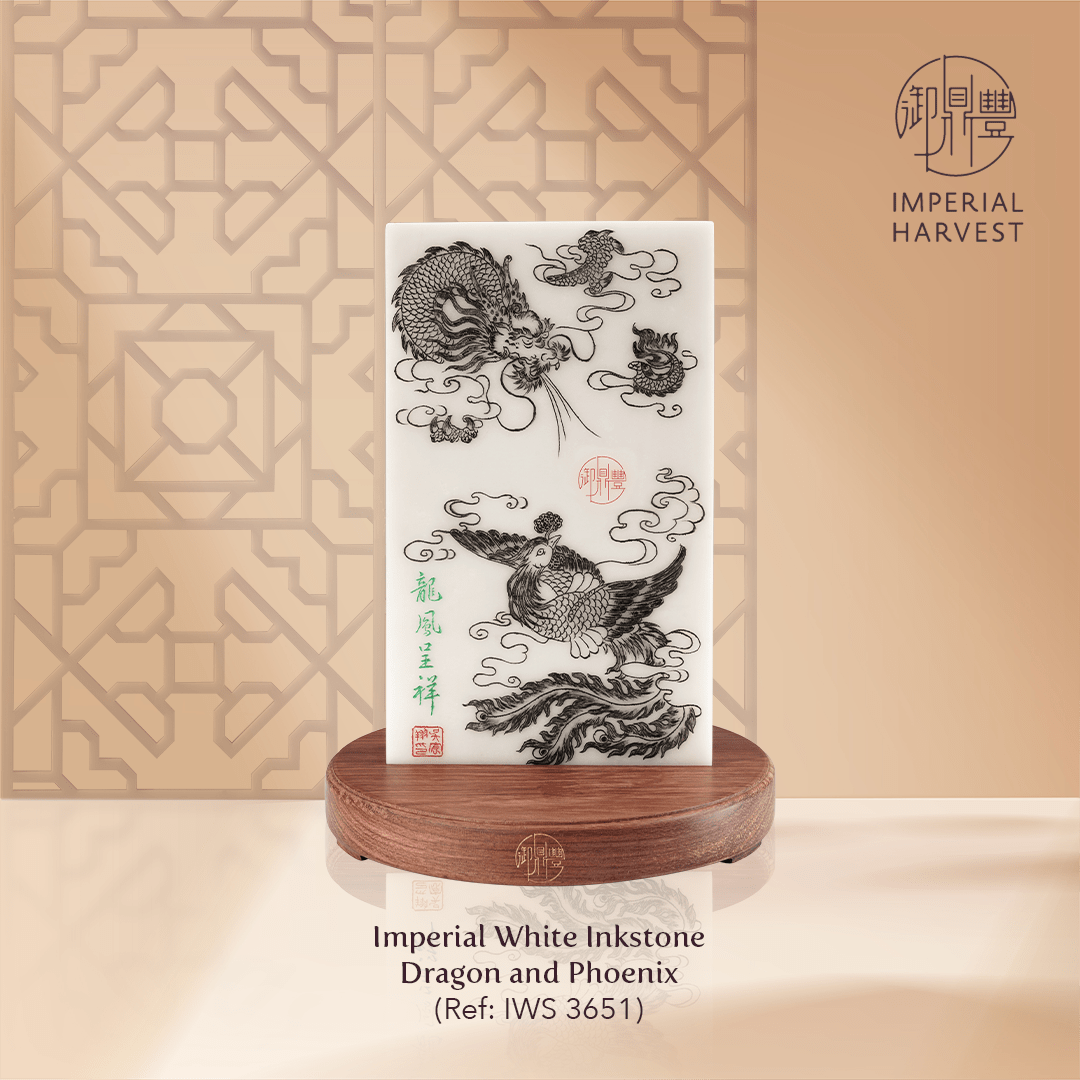 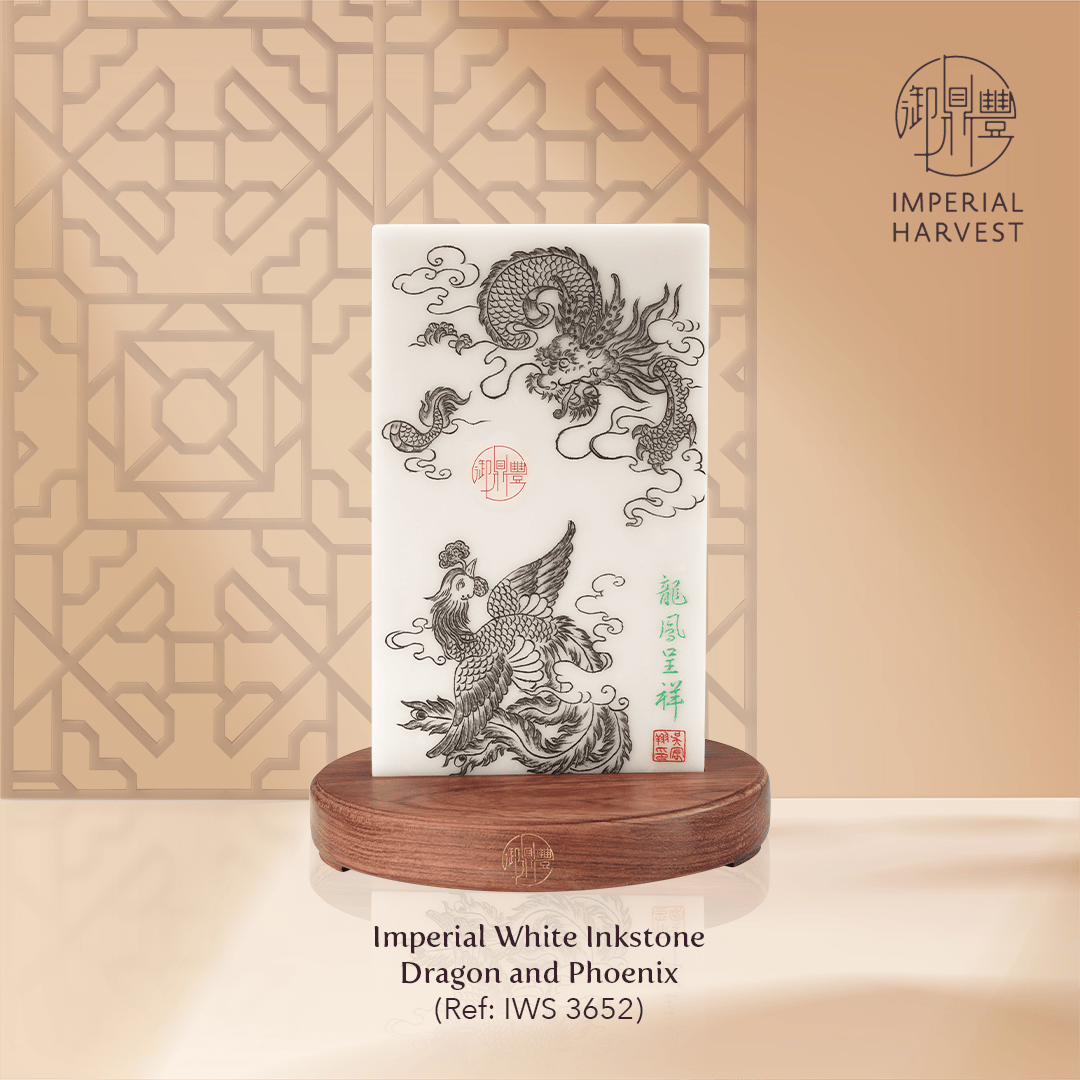 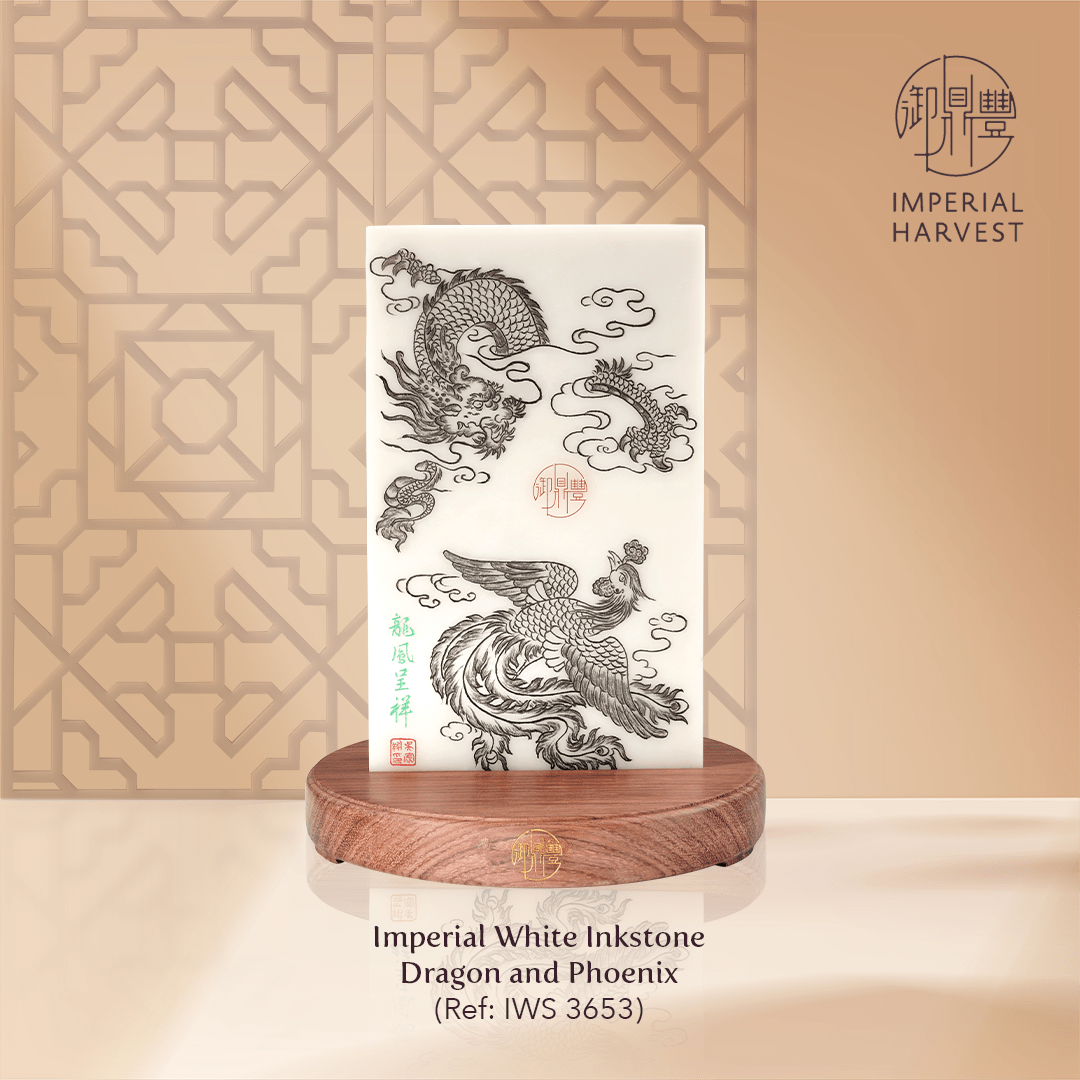 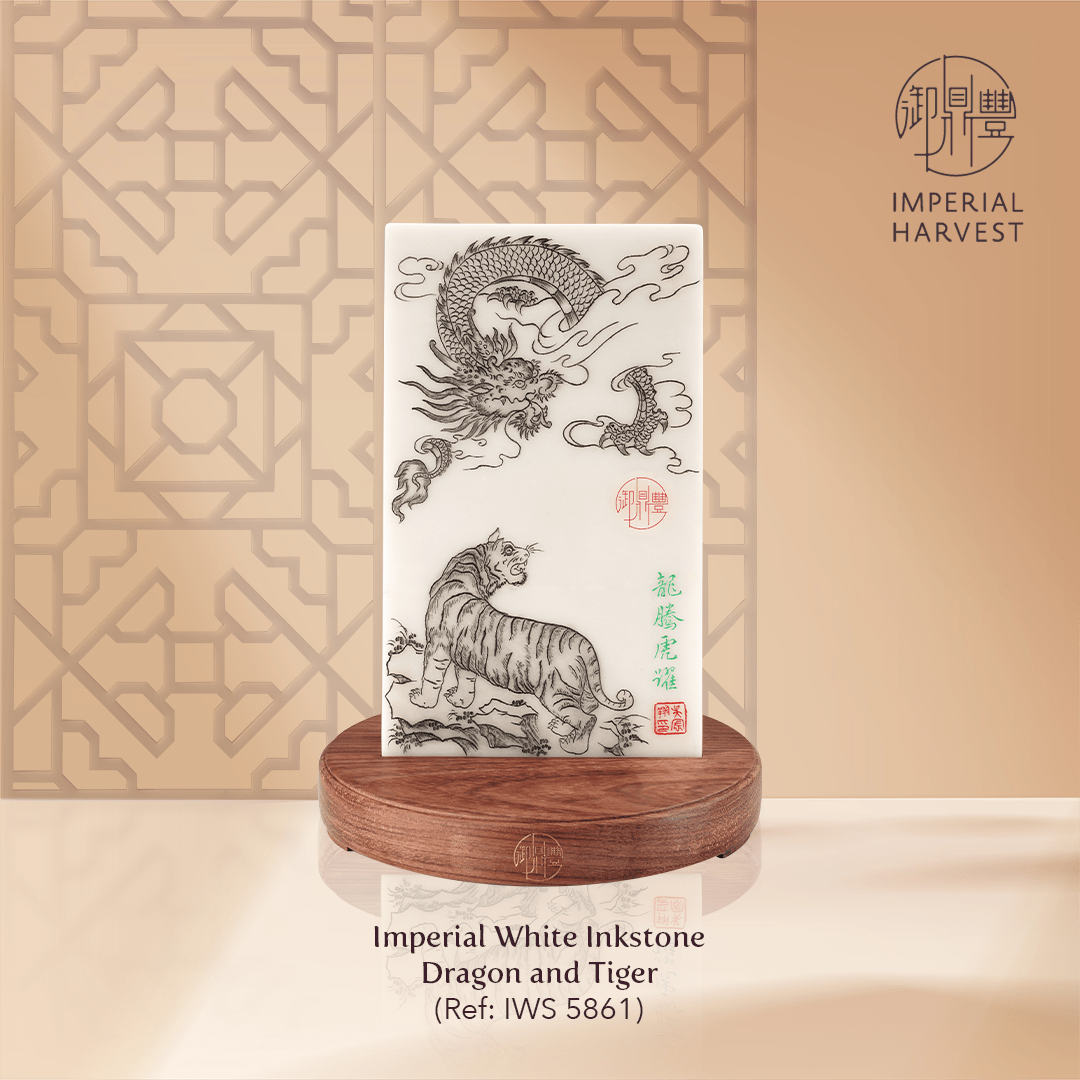 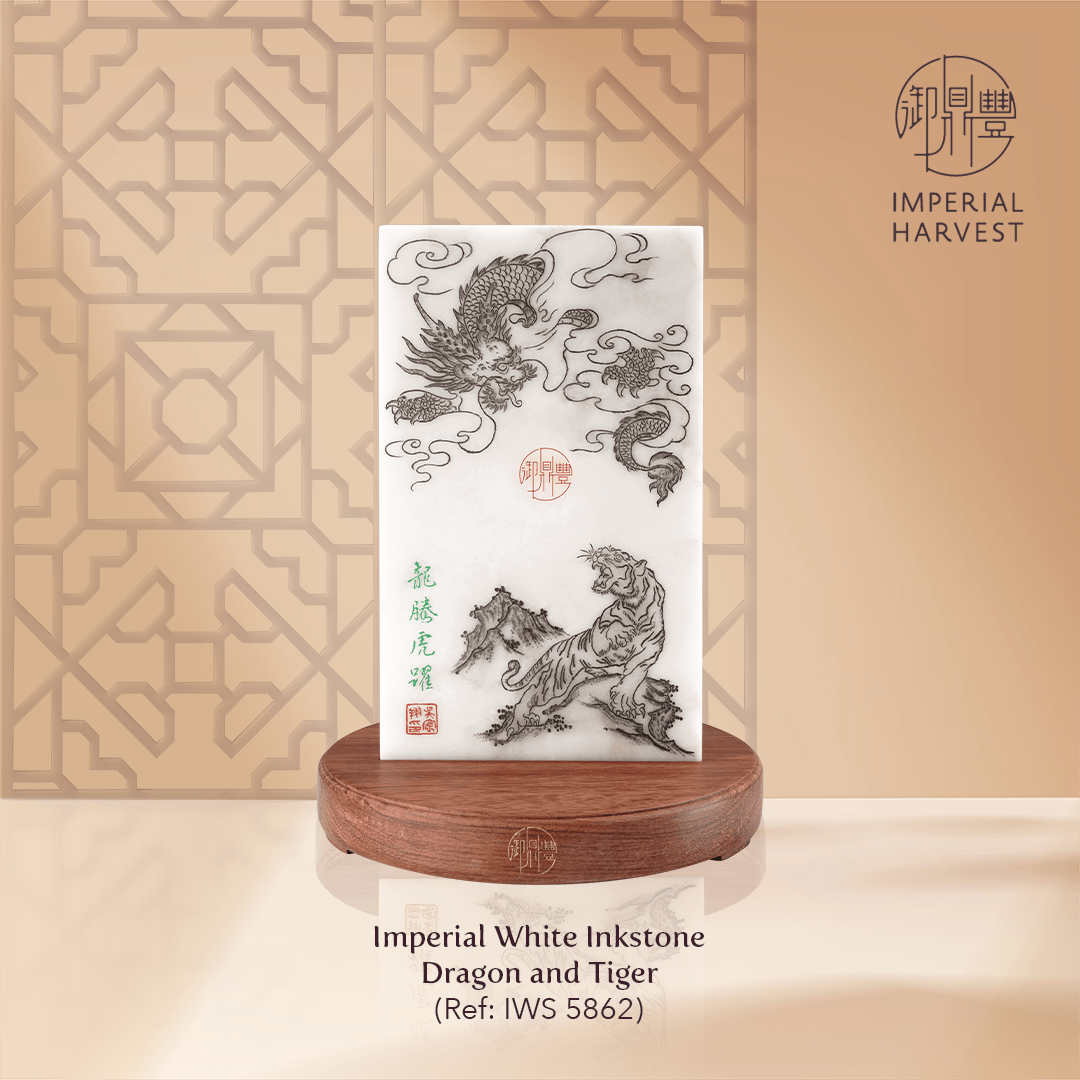 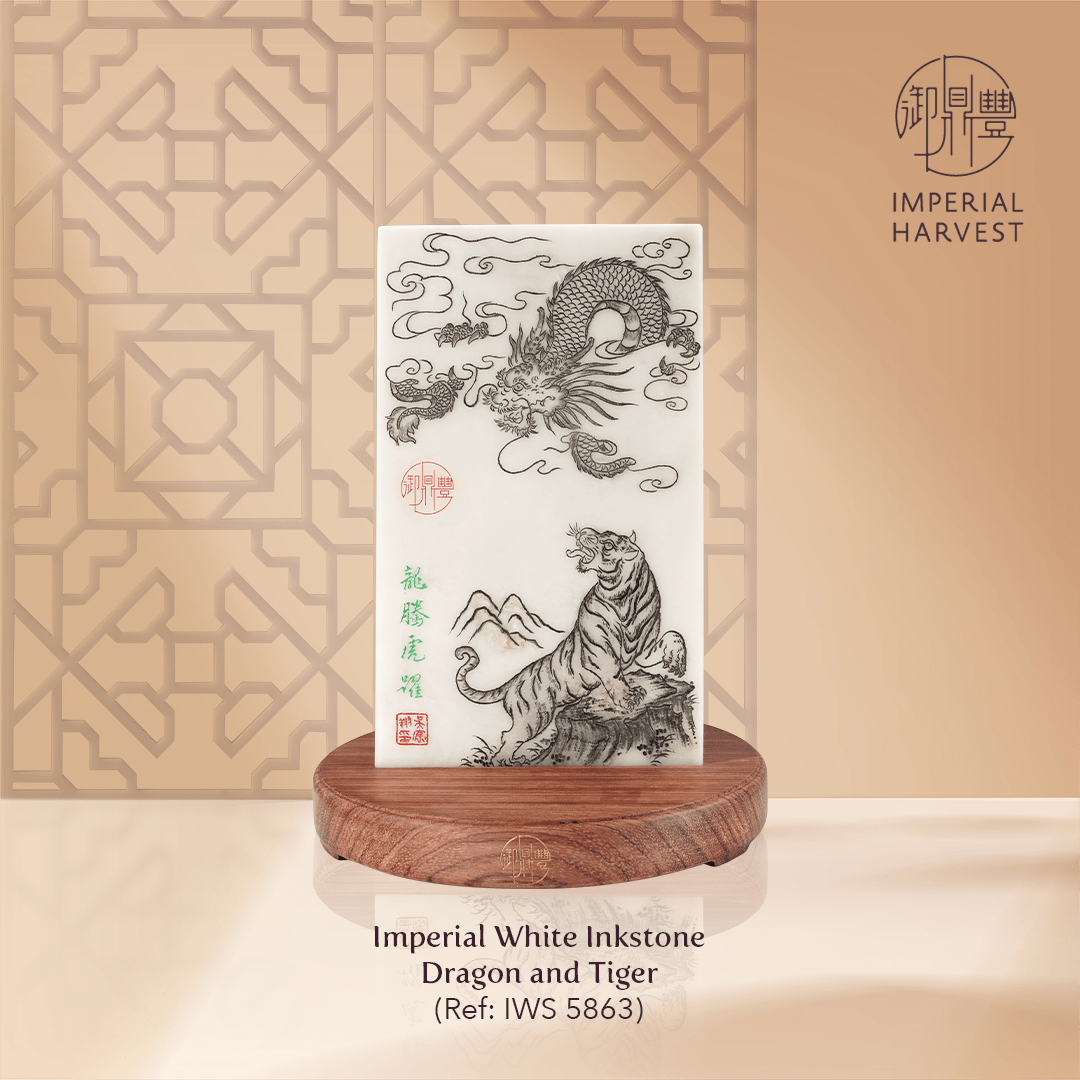 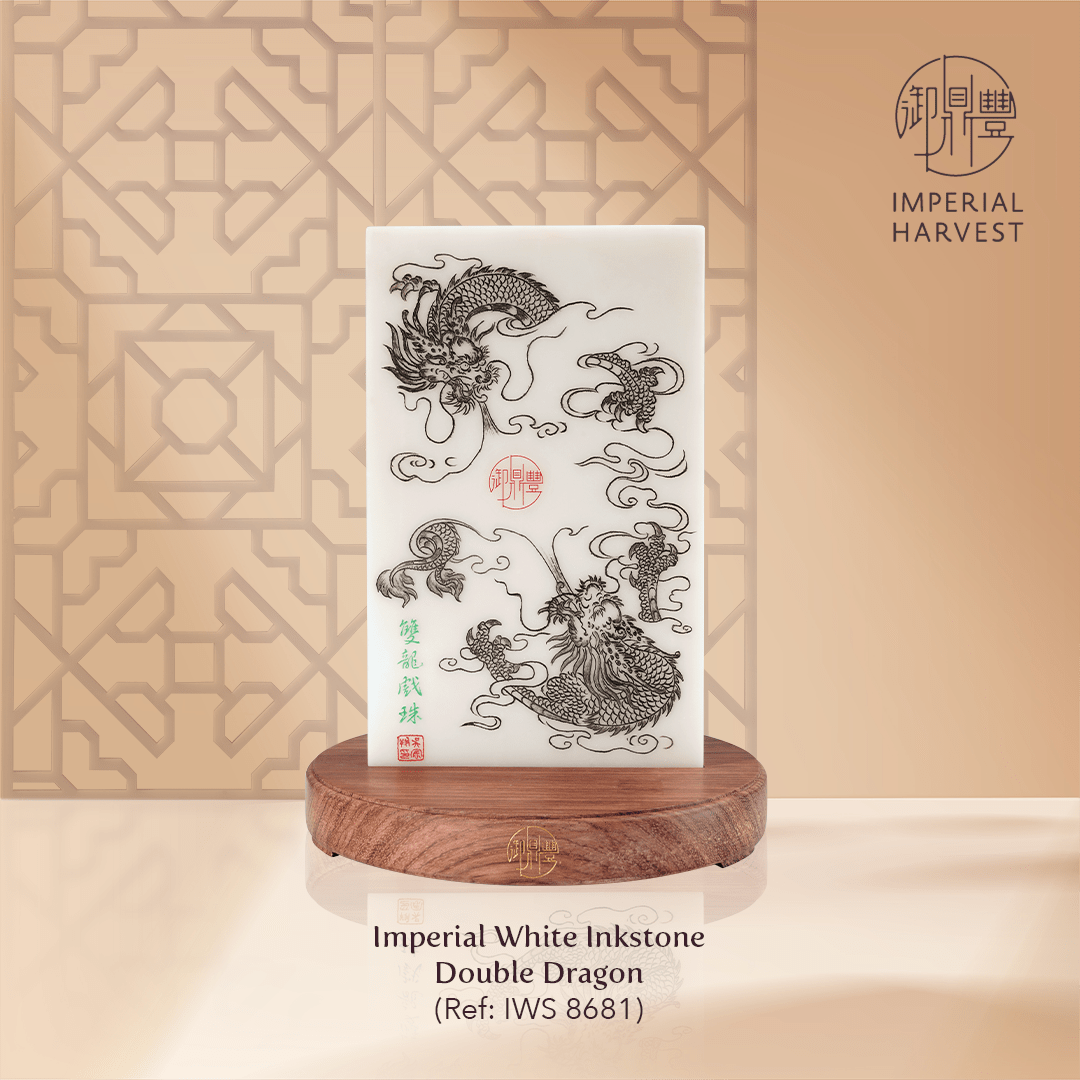 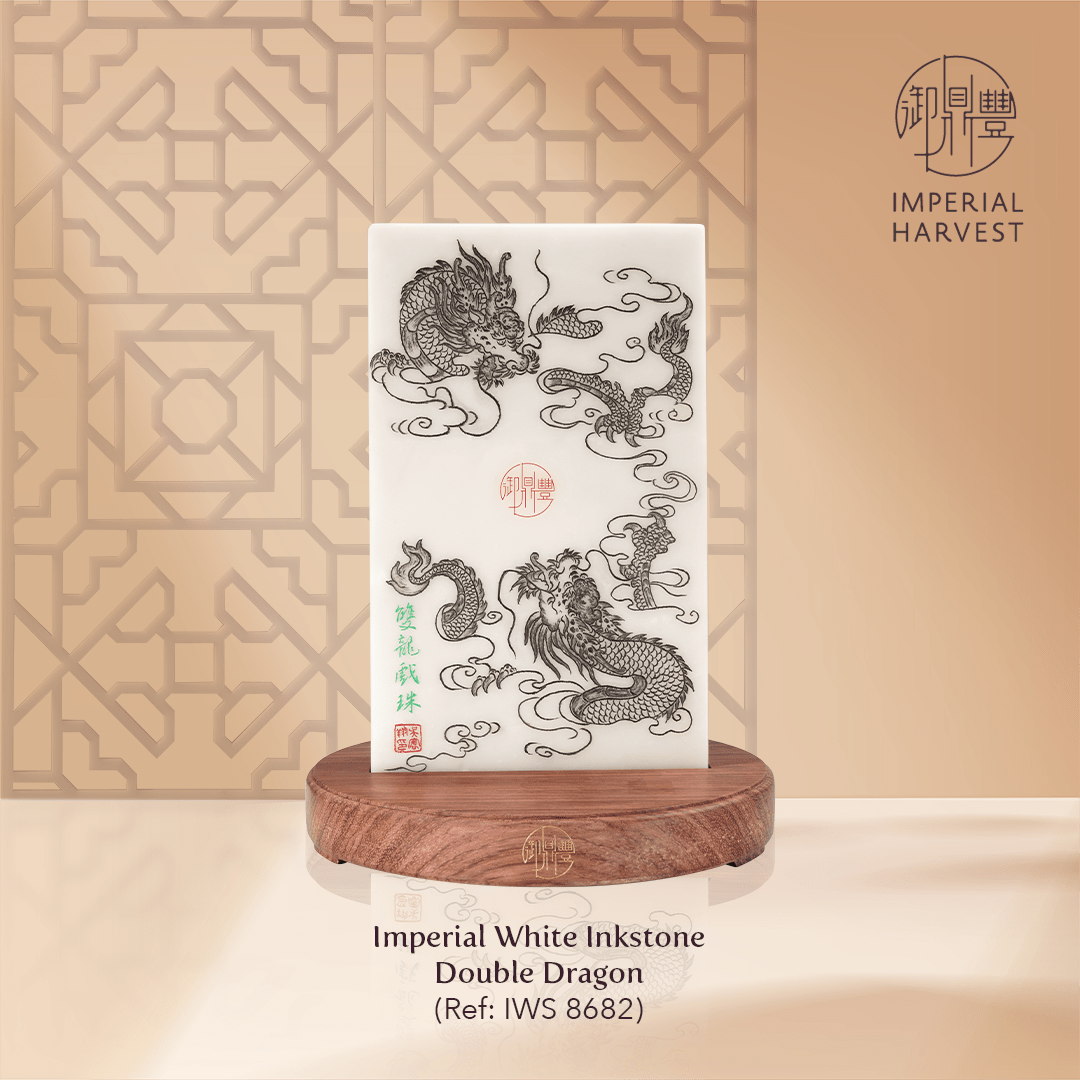 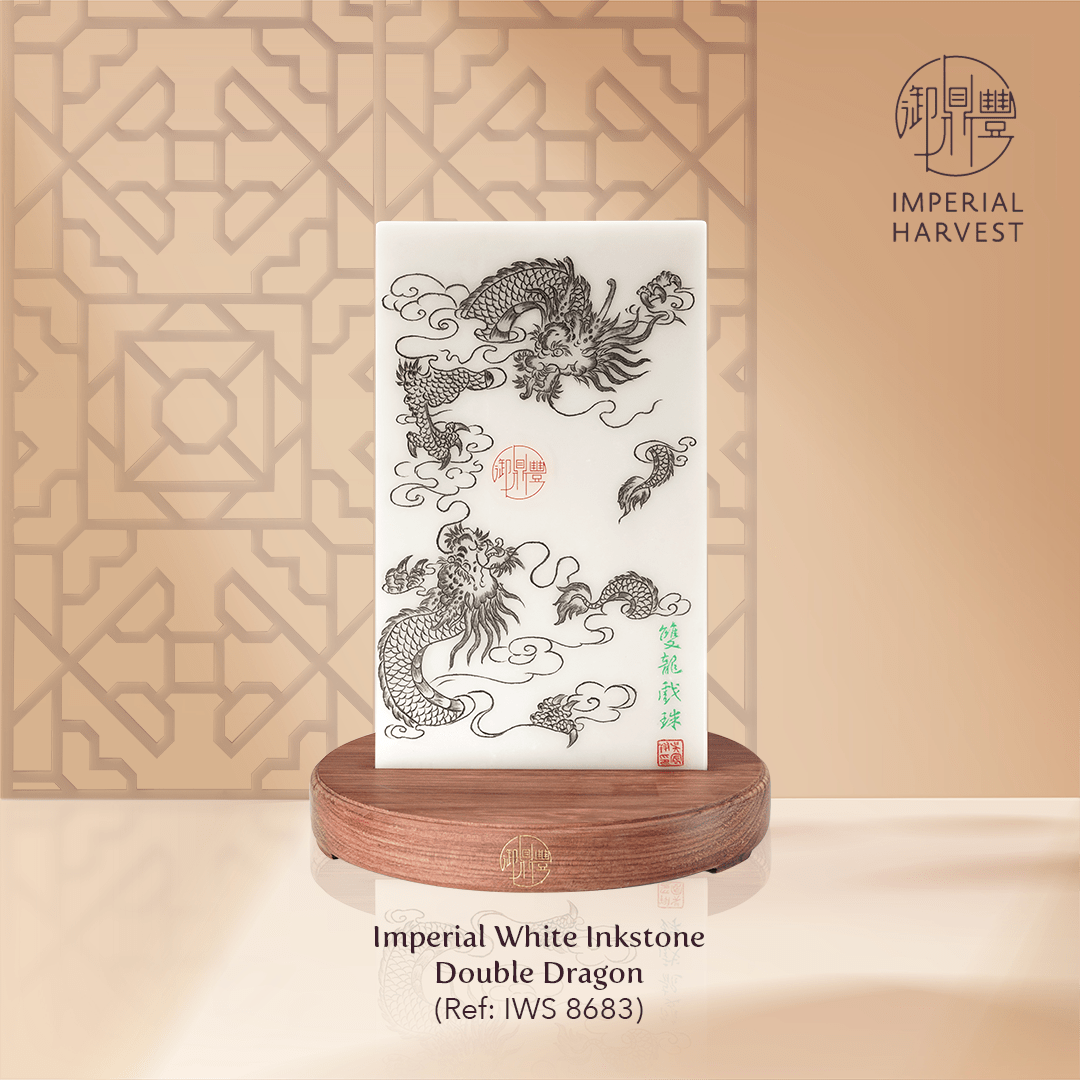 Indirect Wealth Sectors in the Home and Office