As the deified reincarnation of Guan Yin, the Goddess of Mercy is one of the most prominent figures in Buddhism. Across the extensive branches and traditions of this ancient religion, Guan Yin is held in great regard by its followers, who turn to her not only for her compassion and alleviation of universal suffering, but also boundless blessings in pursuing their dreams. 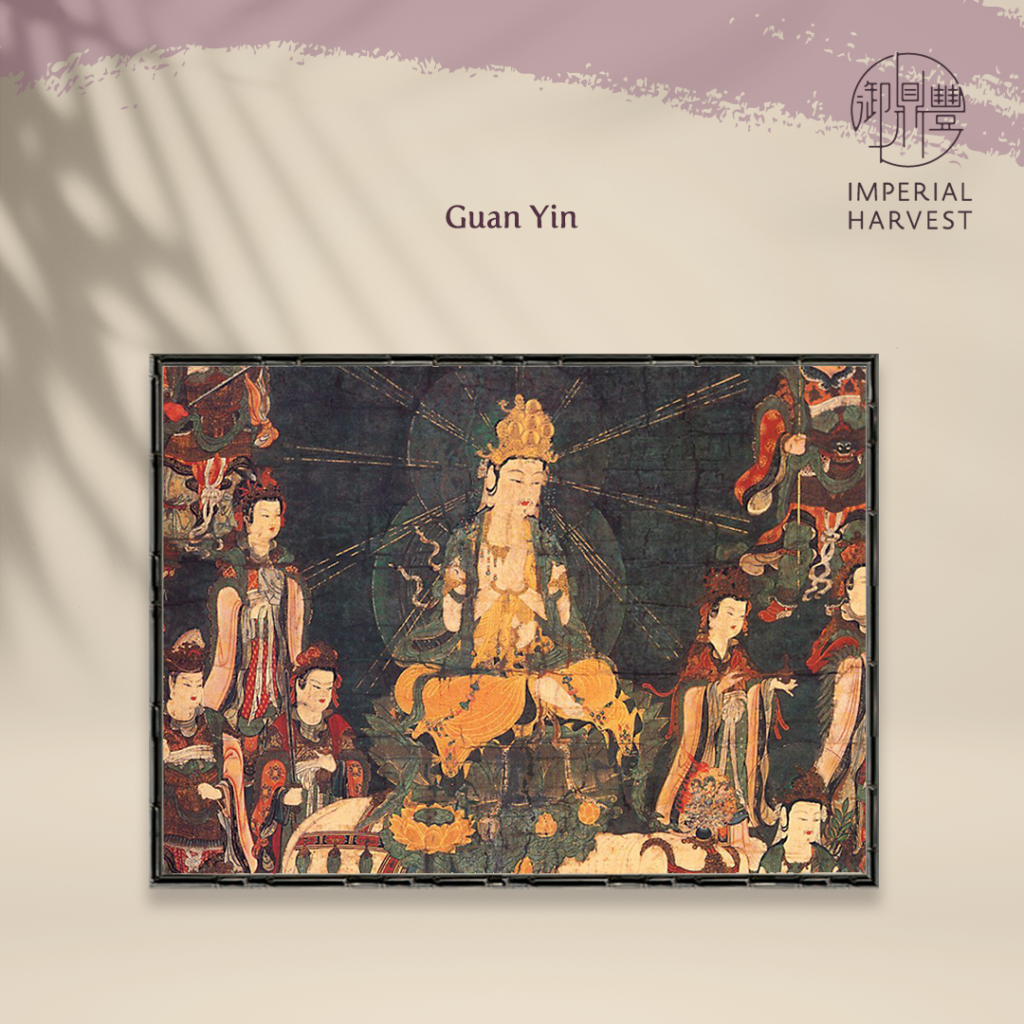 Beyond the Buddhist realm, Guan Yin also bears vast cultural significance across generations of Chinese society, as well as the global Chinese diaspora. Across the world, temples and shrines have been established to pay tribute to one or more of Guan Yin’s 33 manifestations. Over time, each has built up a legend of its own, becoming firmly entrenched in the folklore of various communities. 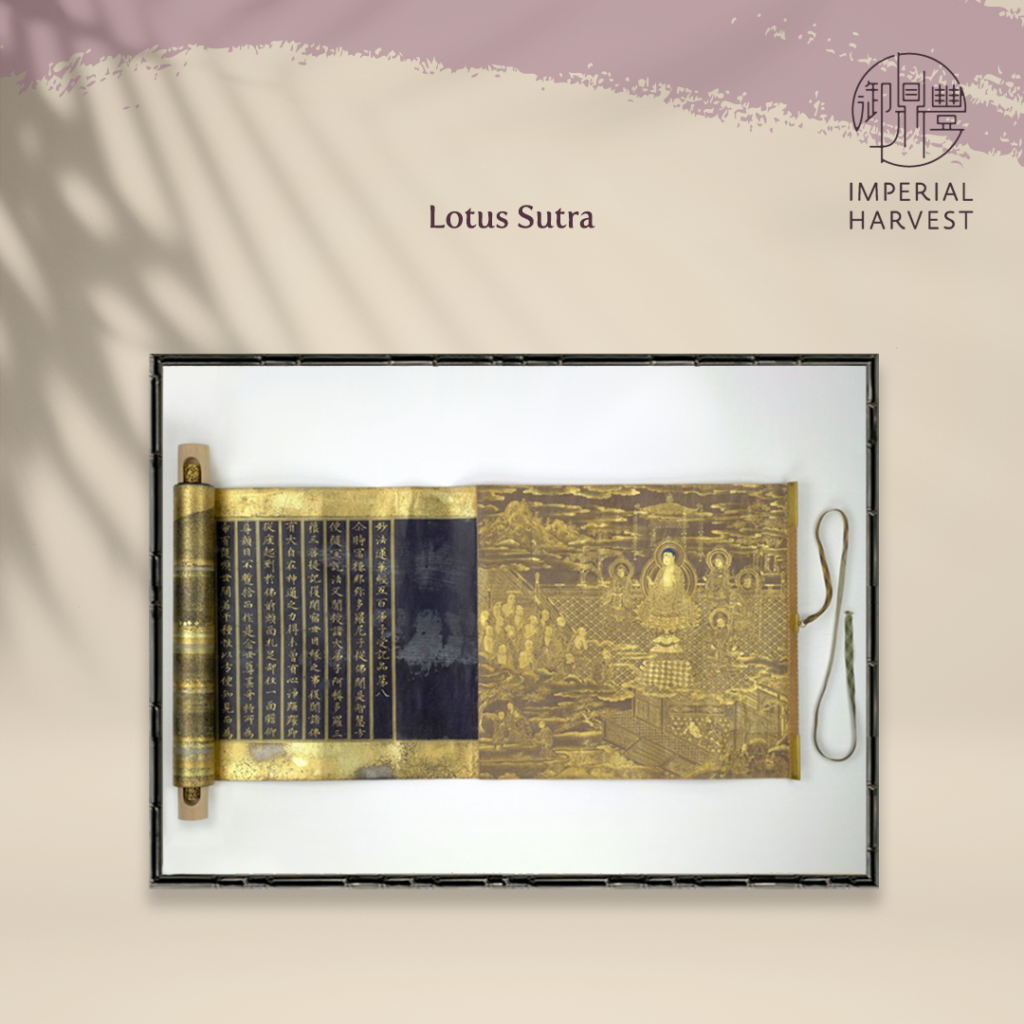 The Lotus Sutra, considered one of the most influential Buddhist scriptures, exerts great influence on the devotion surrounding the Goddess of Mercy. A chapter of this most venerated text is devoted to Guan Yin, waxing lyrical about her charitably fulfilling the needs of sentient beings, and also aiding the salvation of mankind. Moreover, she selflessly took it upon herself to save mankind from greed, anger and ignorance, guiding her in her lifelong endeavours to empower humanity towards its greatest potential.

The wealth of experiences accrued by Guan Yin throughout her eventful life are today encapsulated in her three distinct birthdays celebrated devoutly by her followers. Each of these represents a specific period of significance in her journey on earth, and is commemorated annually by devotees. 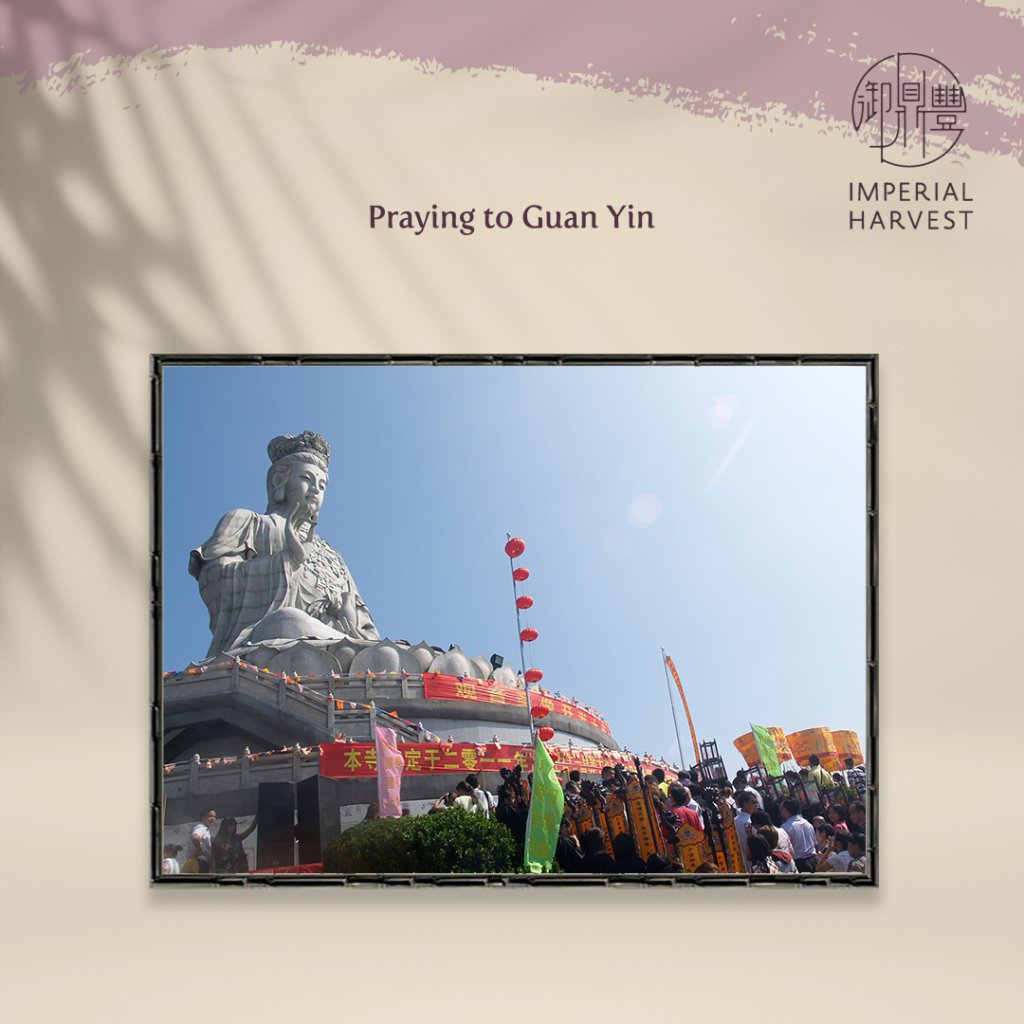 On each of Guan Yin’s three birthdays, Buddhist temples hold major observances in tribute to her — involving practices such as the burning of incense, the lighting of candles and making offerings and tributes in her honour. These serve to remind devotees of Guan Yin’s sacrifice and struggle against the odds for her lifelong convictions. Beyond Buddhism, Guan Yin’s legacy often transcends religious boundaries, with her admirable qualities serving as valuable teaching moments in cultural studies of ancient Chinese civilisations.

Indeed, the Imperial Feng Shui tradition also draws heavily on Guan Yin’s teachings. Especially significant is her desire to break away from her ordained path of royal privilege and stand by her creed of supporting mankind in its quest for betterment. This resonates strongly with the key tenets of Imperial Feng Shui. In particular, this ancient art stands by a staunch refusal to yield to the predestined fate that befalls each individual, instead empowering followers with the tools and techniques to manifest their desired destinies.

With the commencement of the month of July, Guan Yin’s second birthday looms on the horizon. This falls on the 19th day of the 6th lunar month — 17 July this year. Drawing on Guan Yin’s relentless commitment to the betterment of mankind, Imperial Harvest celebrates her second birthday — commemorating her attainment of enlightenment — with the finest earthly treasures inspired by her legend and legacy. 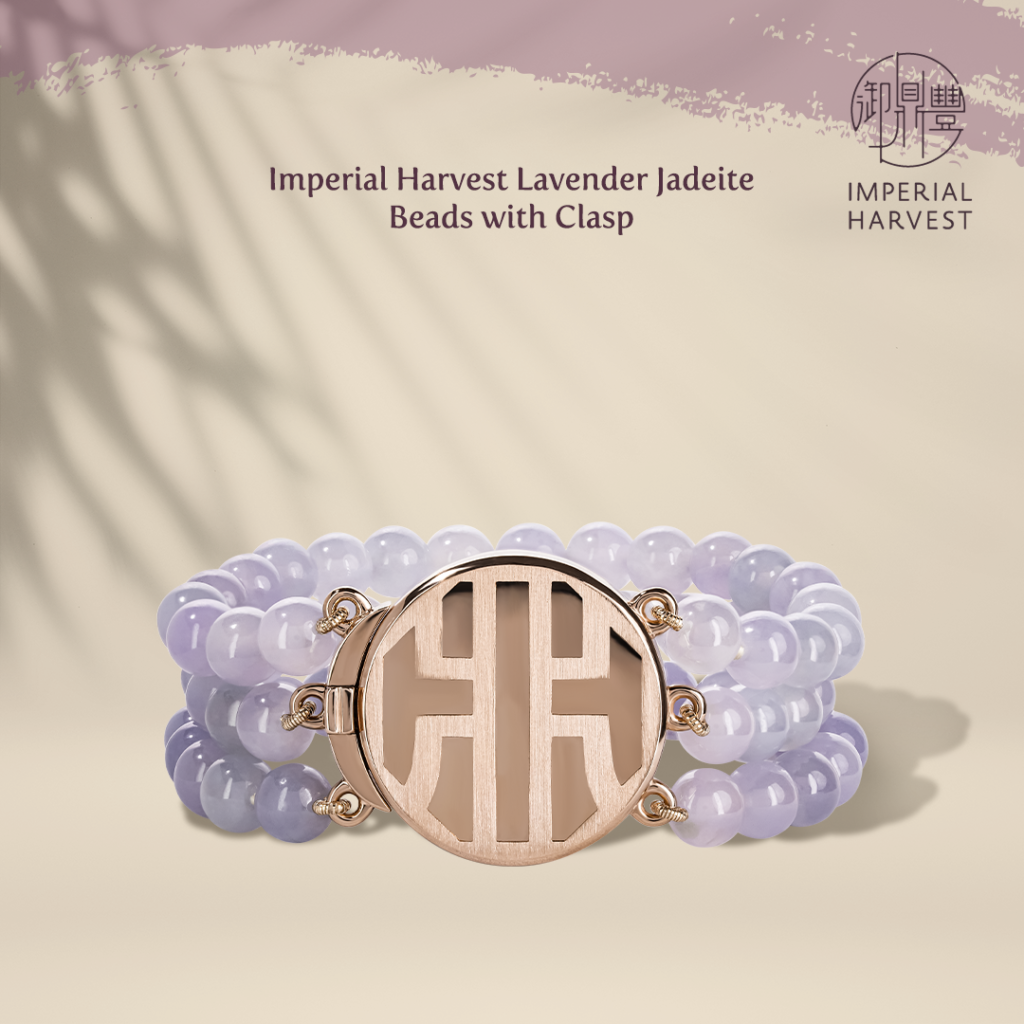 At Imperial Harvest, the Jadeite Beads Bracelet serves as a visually stunning tribute to Guan Yin’s divine qualities. Throughout her bouts of meditative contemplation, during which she would invoke cosmic blessings upon her devotees’ struggles and sufferings, Guan Yin was known to use a chain of rosary beads to enhance her focus and omnipresent influence across the wide-ranging experiences of her devotees. As she faithfully prayed for the salvation of mankind, the beads were methodically rotated and shuffled through her hands in a gentle rhythmic motion, putting her in an ideal state of mind to channel divine blessings to her devotees. 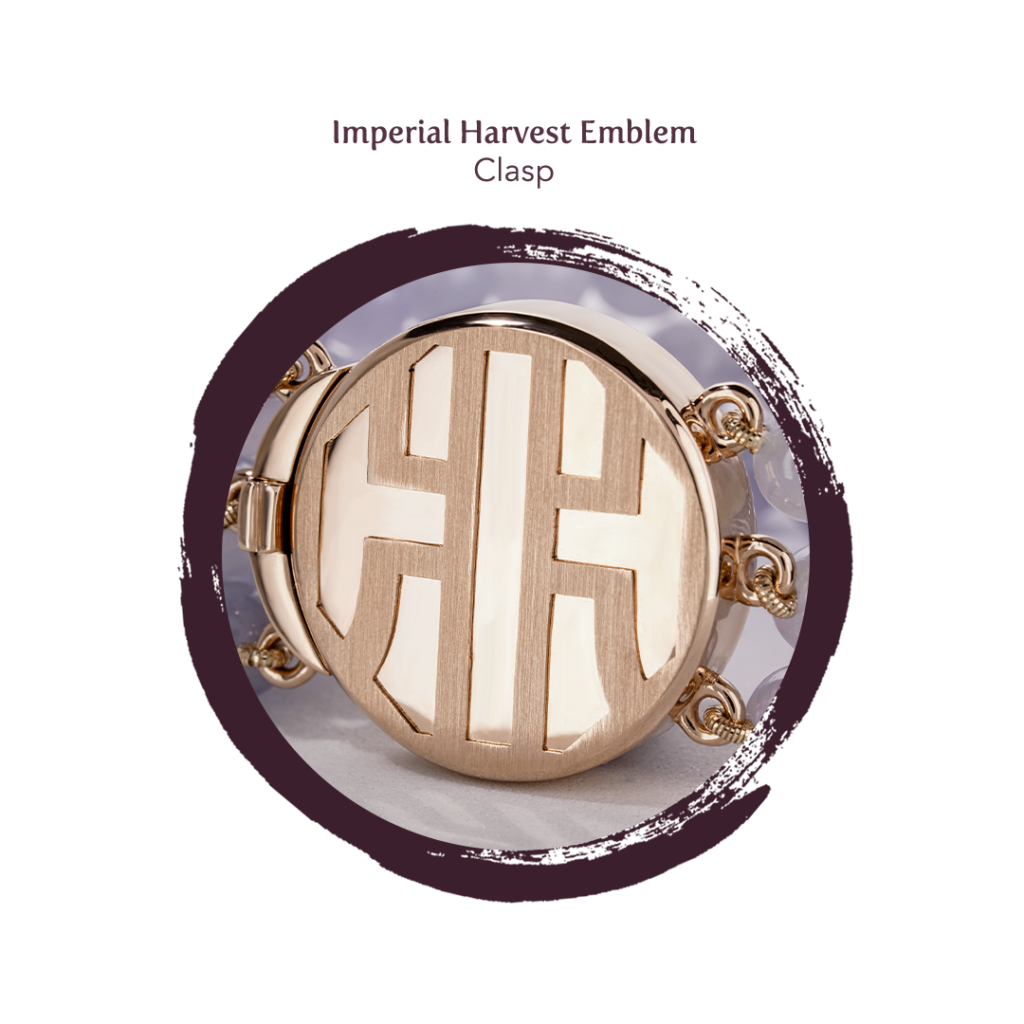 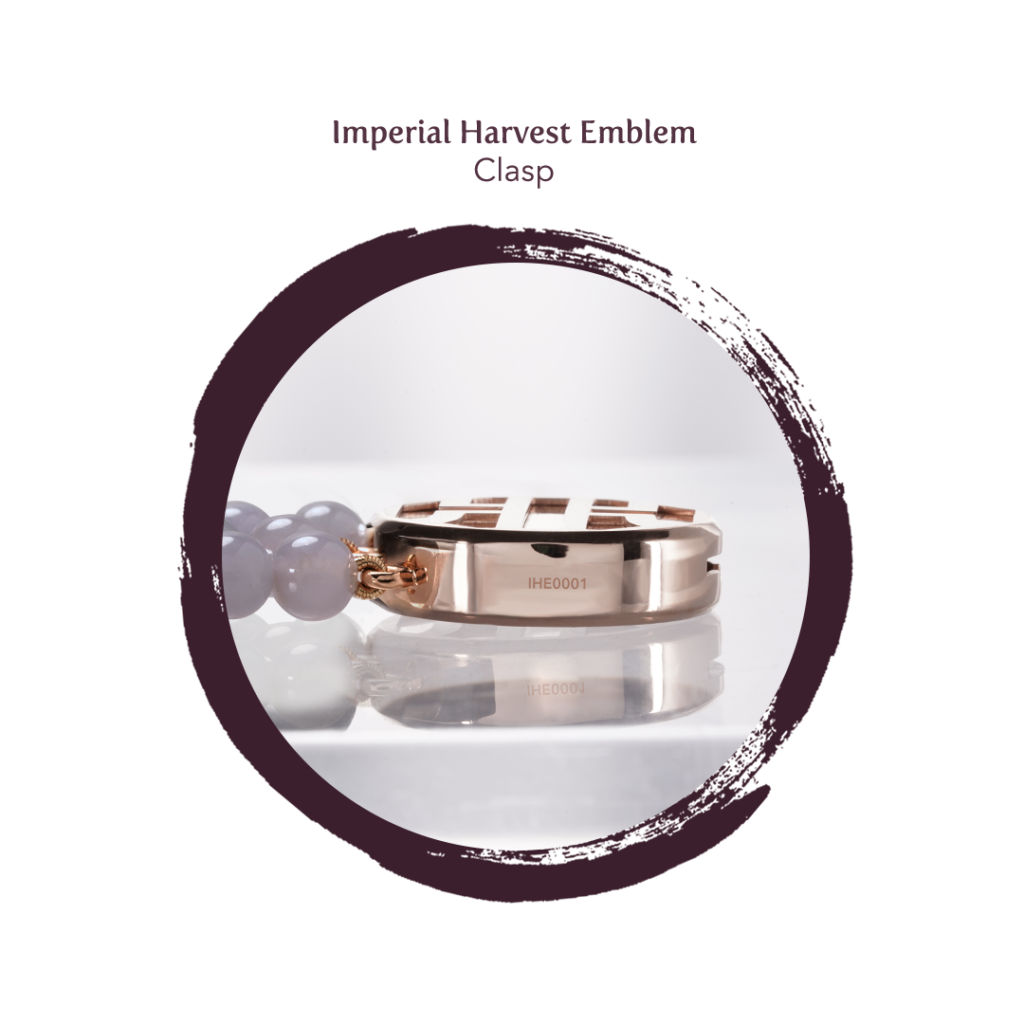 While the Imperial Harvest Jadeite Beads Bracelet’s functions transcend the meditative communications Guan Yin engaged in, they bear a striking resemblance to her rosary beads. In a contemporary update to her prayerful treasure, each Imperial Harvest jadeite bead is handcrafted from exquisite jadeite sourced exclusively from reputable mines in Myanmar — the world’s foremost source of jadeite in both quality and quantity. Only jadeite hearts — the very centres of jadeite boulders where Imperial Feng Shui energies are the densest — are used in the construction of Imperial Harvest jadeite beads. Exquisite jadeites — the highest tier of jadeites available — are harvested for the Imperial Harvest Jadeite Beads Bracelet, conferring upon this earthly treasure a luminous, glass-like sheen that can be derived only from this exclusive tier of jadeites. 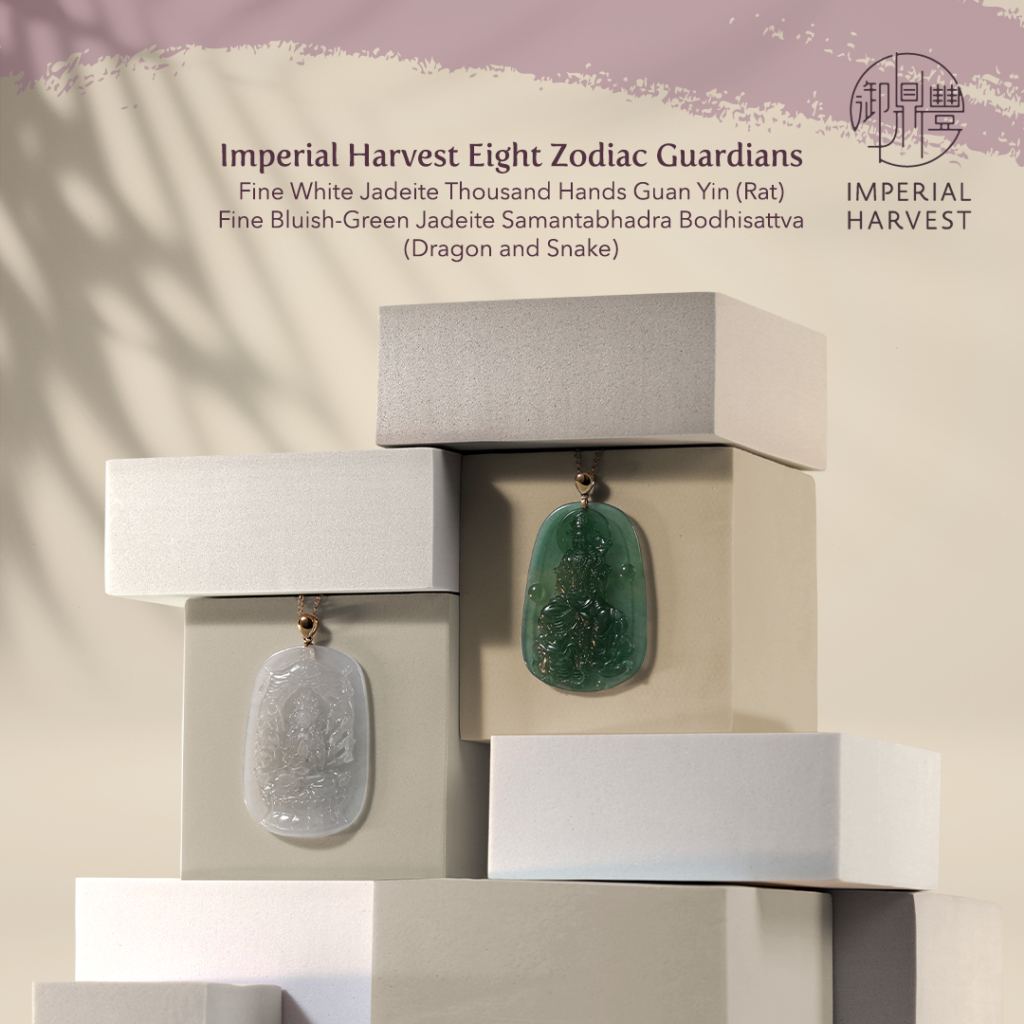 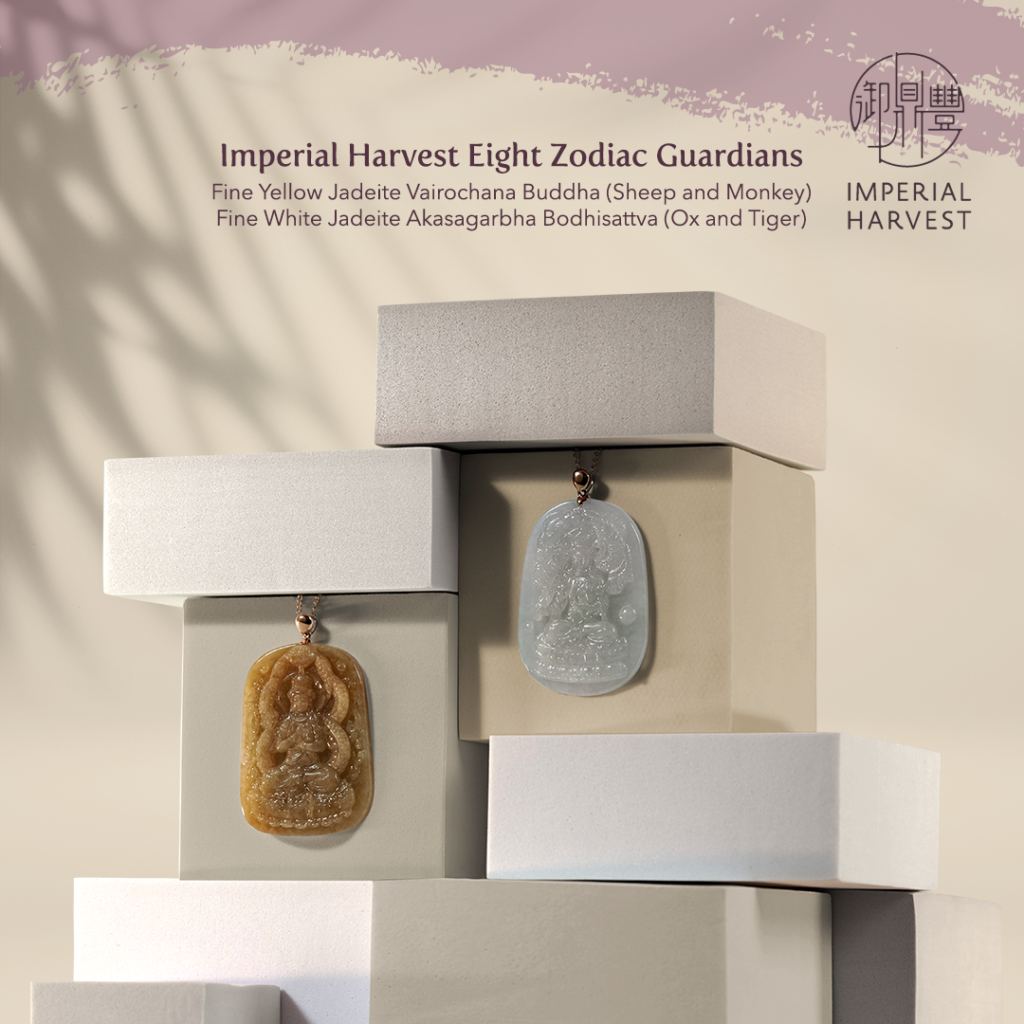 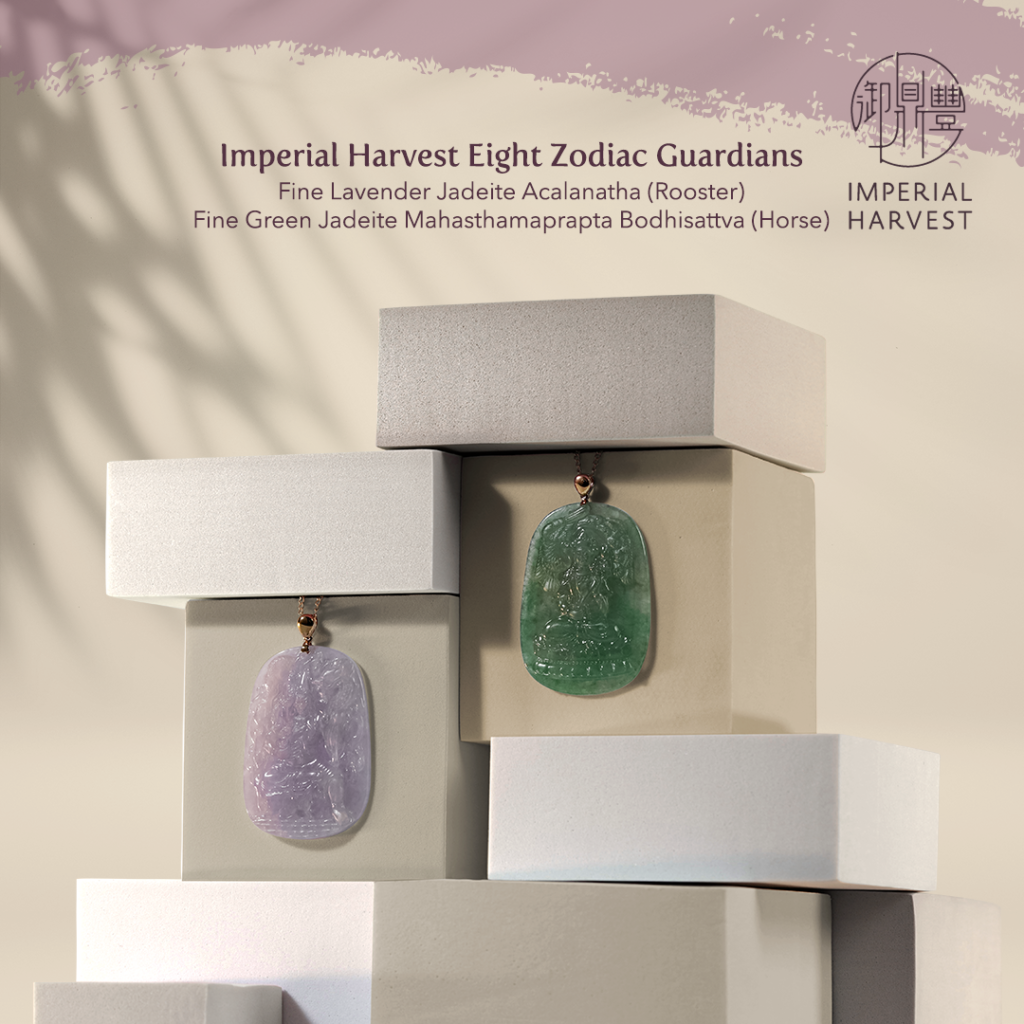 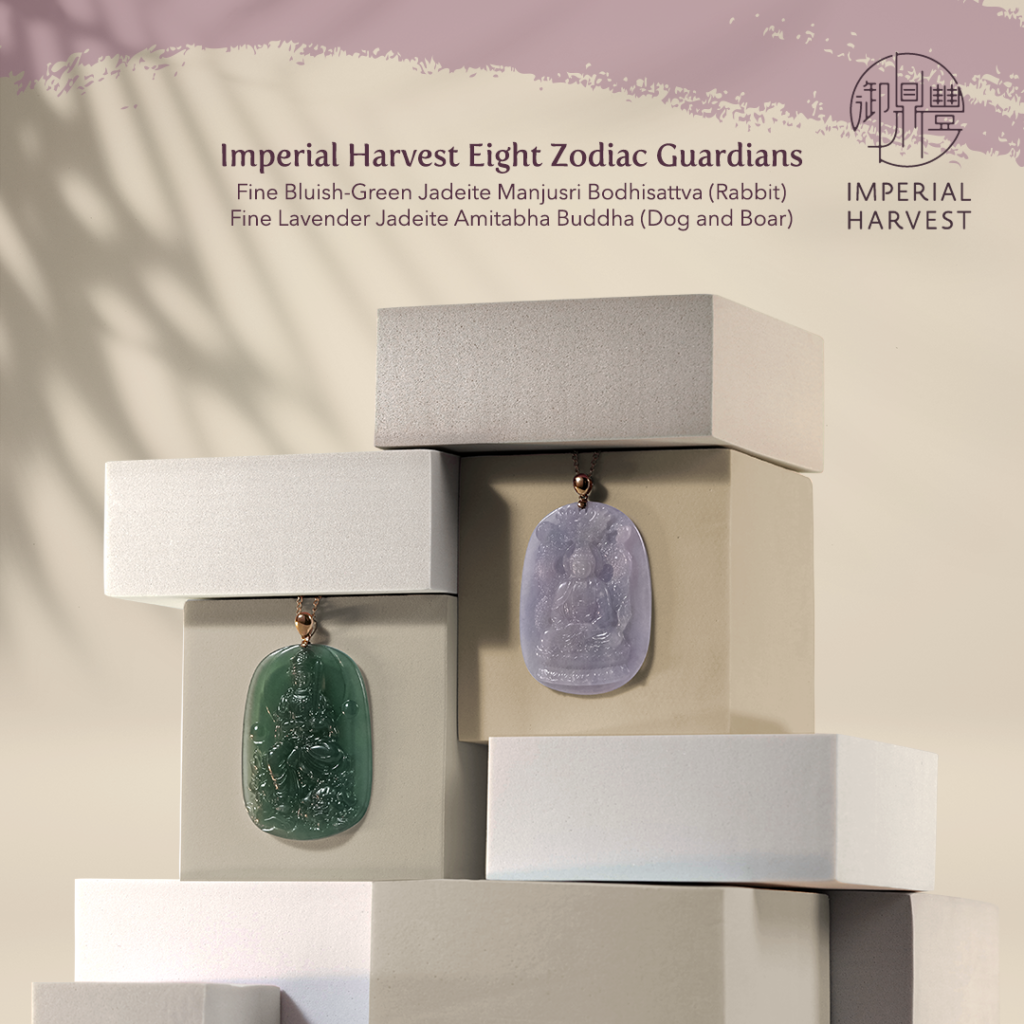 With her 33 manifestations, the very essence of Guan Yin’s compassion and consideration for humankind infiltrates every one of these eight zodiac guardians. Indeed, each of these eight deities is, therefore, an embodiment of Guan Yin herself, and reflects the selfless dedication of her life to the welfare and empowerment of humanity. 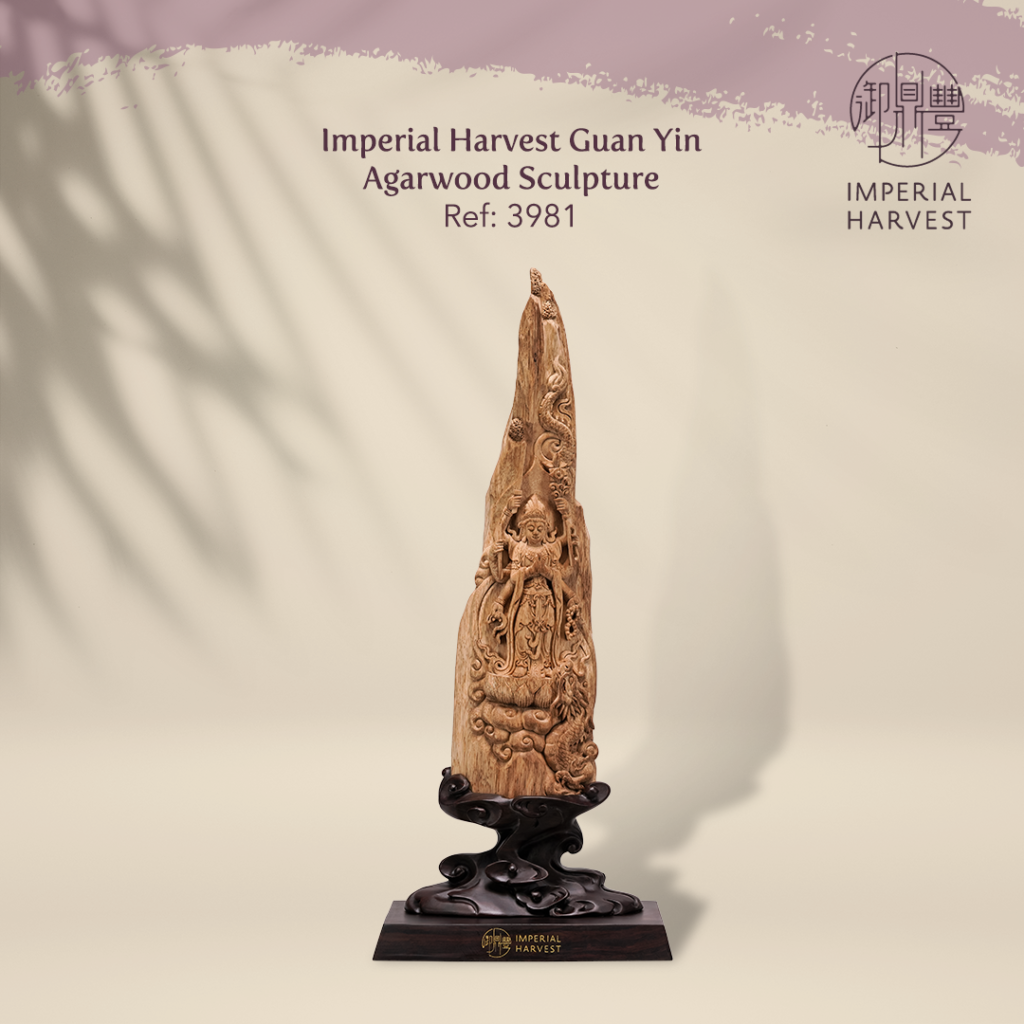 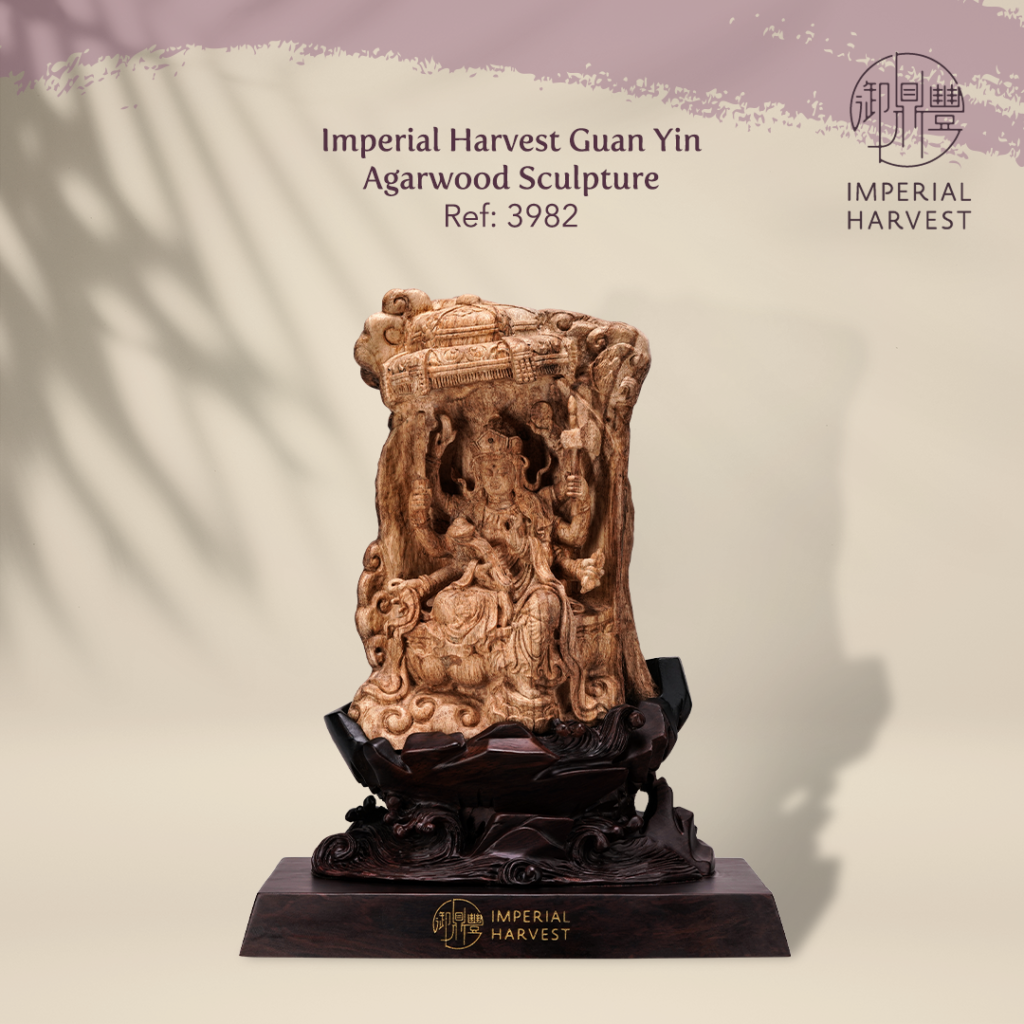 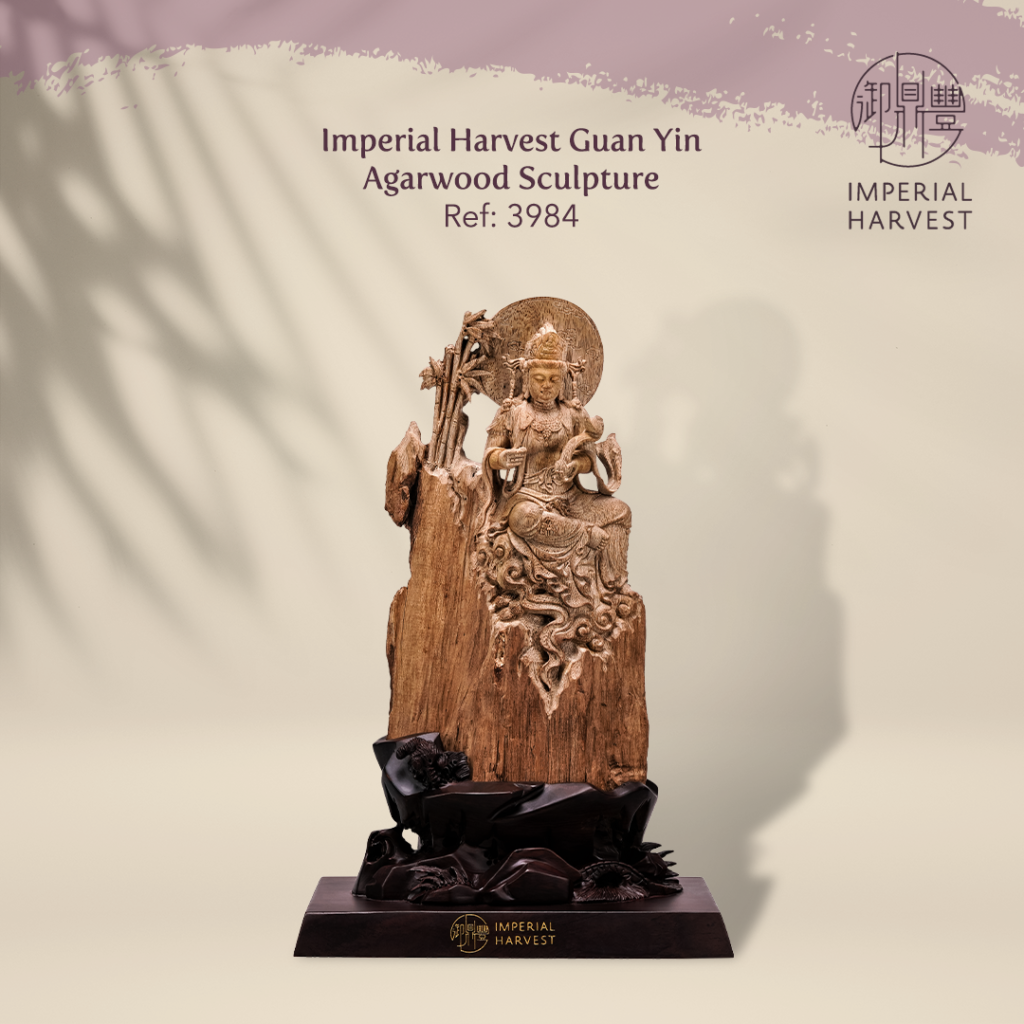 Upon harvesting, the raw agarwood comes under the purview of Imperial Harvest’s wood artisans, who draw on their multi-generational expertise to carve the desired intricate features onto the harvested wood. It is at this stage of production that these master craftsmen are truly in their element, drawing on the wealth of skills and techniques passed down from their forefathers to fashion lifelike images on the canvas of wood before them.

The result of this labour of passion is the exquisitely handcrafted Imperial Harvest Agarwood sculptures. Within this range of sculptures, the pieces bearing the image of Guan Yin are undoubtedly among the most well-received by Imperial Harvest blessed clients.
Much of their repute derives from the rarity of such large slabs of agarwood — ideal for rendering the numerous intricate features of Guan Yin’s image. As befits an Imperial Harvest treasure, the craftsmanship employed in such meticulous detailing work is second to none. 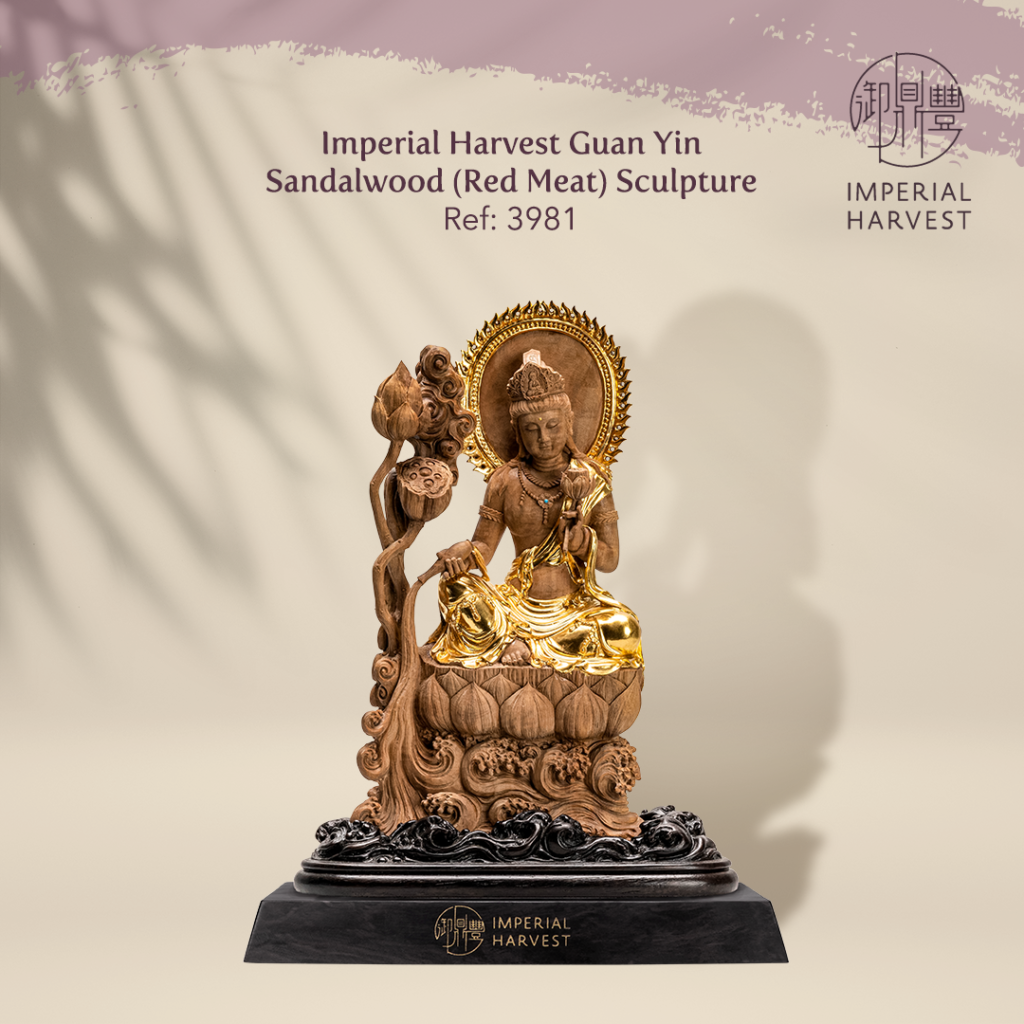 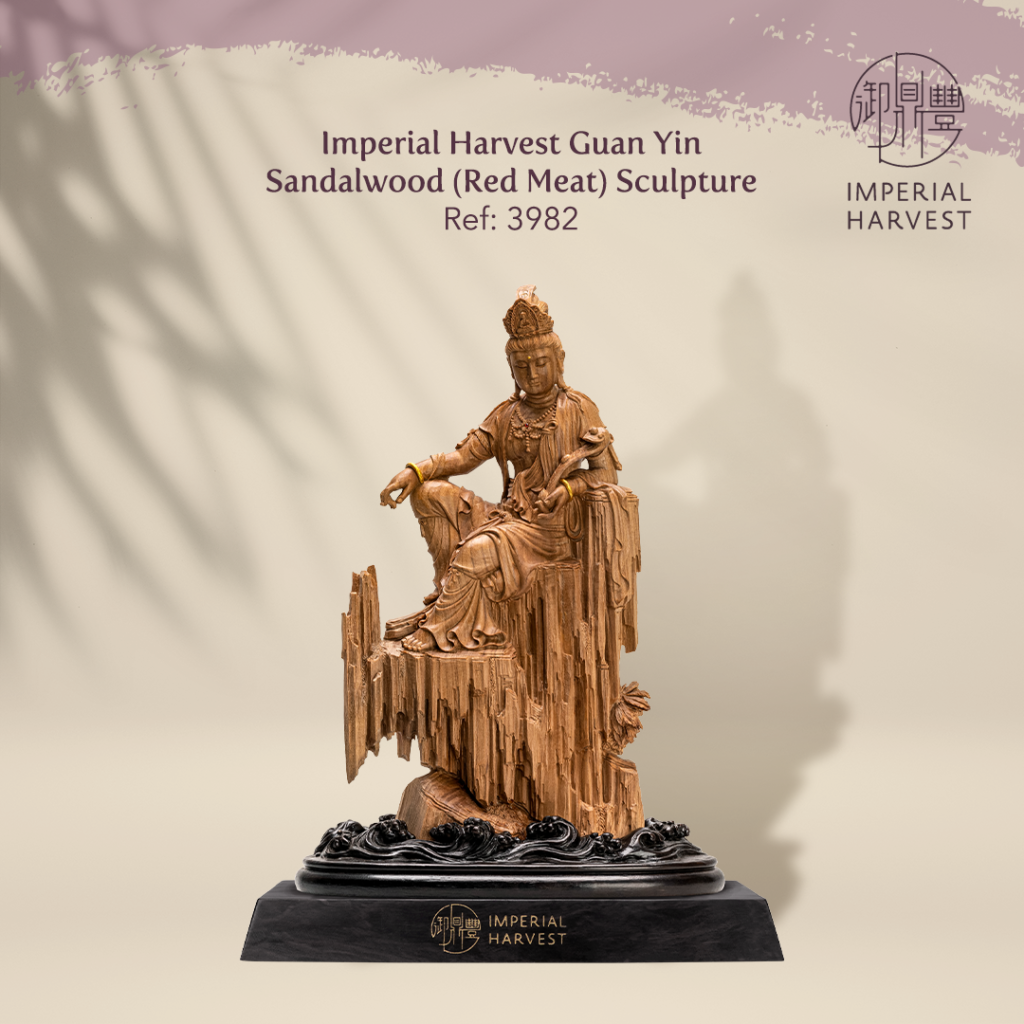 While agarwood is revered in Imperial Feng Shui for its ability to create and expand destined owners’ direct wealth capacity, sandalwood is responsible for indirect wealth capacity. As a leading Imperial Feng Shui pioneer, Imperial Harvest is proud to introduce an extremely rare sandalwood into the existing lineup of Guan Yin sculptures. The sandalwood of this distinctive Red Meat variety is found naturally in the Karnataka region of Southern India.

To commemorate Guan Yin’s second birthday this year, Master David has commissioned the release of two exquisite carvings of this revered deity in this exclusive wood type. The launch of Red Meat Sandalwood is indeed a testament to the Imperial Harvest ethos of experimentation and innovation, coupled with the relentless pursuit of Imperial Feng Shui excellence.

Today, Imperial Harvest boasts an extensive variety of Imperial Feng Shui treasures. Whether blessed clients opt for a wearable treasure such as the Guan Yin-inspired Imperial Harvest Exquisite Jadeite Bead Bracelet, or the likeness of Guan Yin as the centrepiece of their abodes, she unfailingly empowers them to forge their desired paths in life, and create the destinies of their dreams.

As the sixth lunar month comes along, Imperial Harvest looks forward to celebrating Guan Yin’s attainment of enlightenment by commemorating her second birthday. With an expanded collection of Guan Yin wood sculptures, Imperial Harvest is honoured to continue imbuing homes with her unrivalled passion for the betterment of humankind.