Posted by Imperial Harvest on 05 August 2022

The kitchen is considered the treasury and wealth centre of the home. Even the placements of certain kitchen appliances may substantially impact the well-being and prosperity of the home’s occupants. To kickstart this season of indirect wealth, we will be sharing tips that can help you optimise the Feng Shui of your kitchen to usher in consistent financial growth. 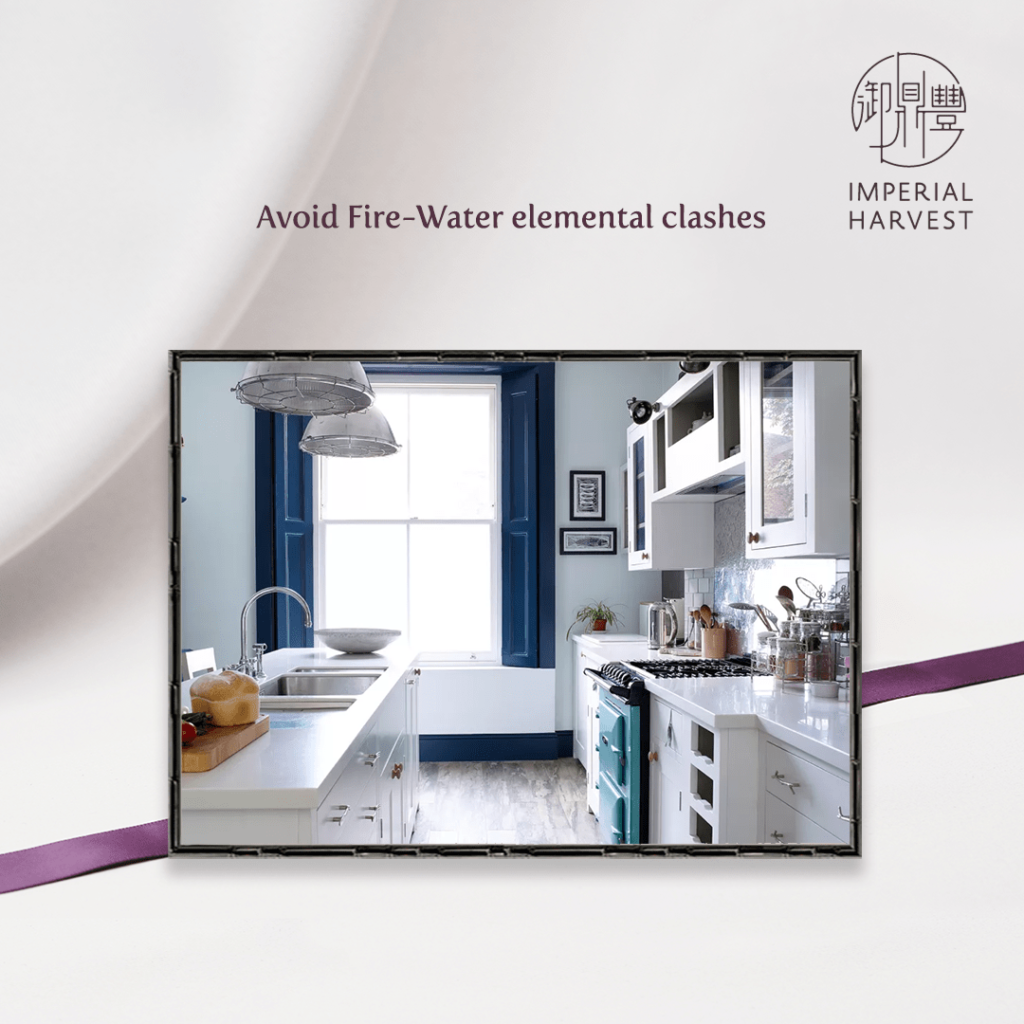 The stove represents the household’s health. As such, it is imperative to maintain an auspicious placement of the stove for the household’s well-being. Closely associated with the element of Fire, the stove should avoid being positioned directly opposite the sink. The resulting inauspicious elemental clash between Fire and Water creates an imbalance, leading to health issues within the household, such as heart or blood-related diseases.

Whereas the kitchen is associated with the element of Fire, the bathroom corresponds with water. Positioning the kitchen and bathroom adjacent to each other, or having their doors face each other results in an inauspicious elemental clash between these rooms of the house.

Auspicious placements for your stove

According to the principles of Imperial Feng Shui, stoves should be positioned in the East, Southeast or South sectors of the home. These sectors correspond to both Wood and Fire elements, making them favourable positions to install your stove. 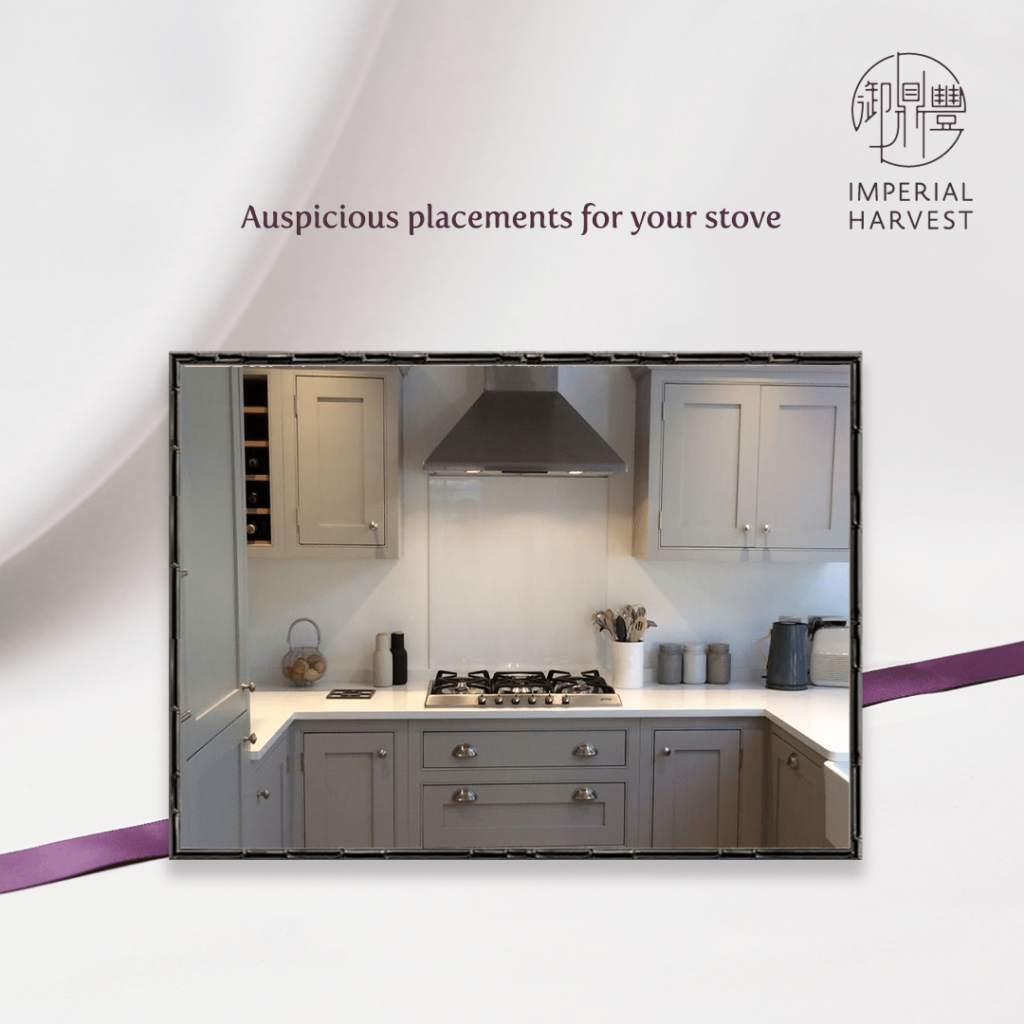 Ideally, the stove should be positioned against the wall, and should not be facing the door or windows to avoid elemental clashes. When selecting an appropriate stove for your kitchen, choosing one featuring an odd number of burners has auspicious connotations, as odd numbers are favourable in Imperial Feng Shui.

Positioning the stove under a ceiling beam can cause the household’s occupants to experience additional pressure, significant challenges and stress in their workplaces.

Most of all, note that the stove should never face nor be placed against the window. Doing so indicates leakage of wealth and substantial financial losses within the household.

Inauspicious placements for your refrigerator 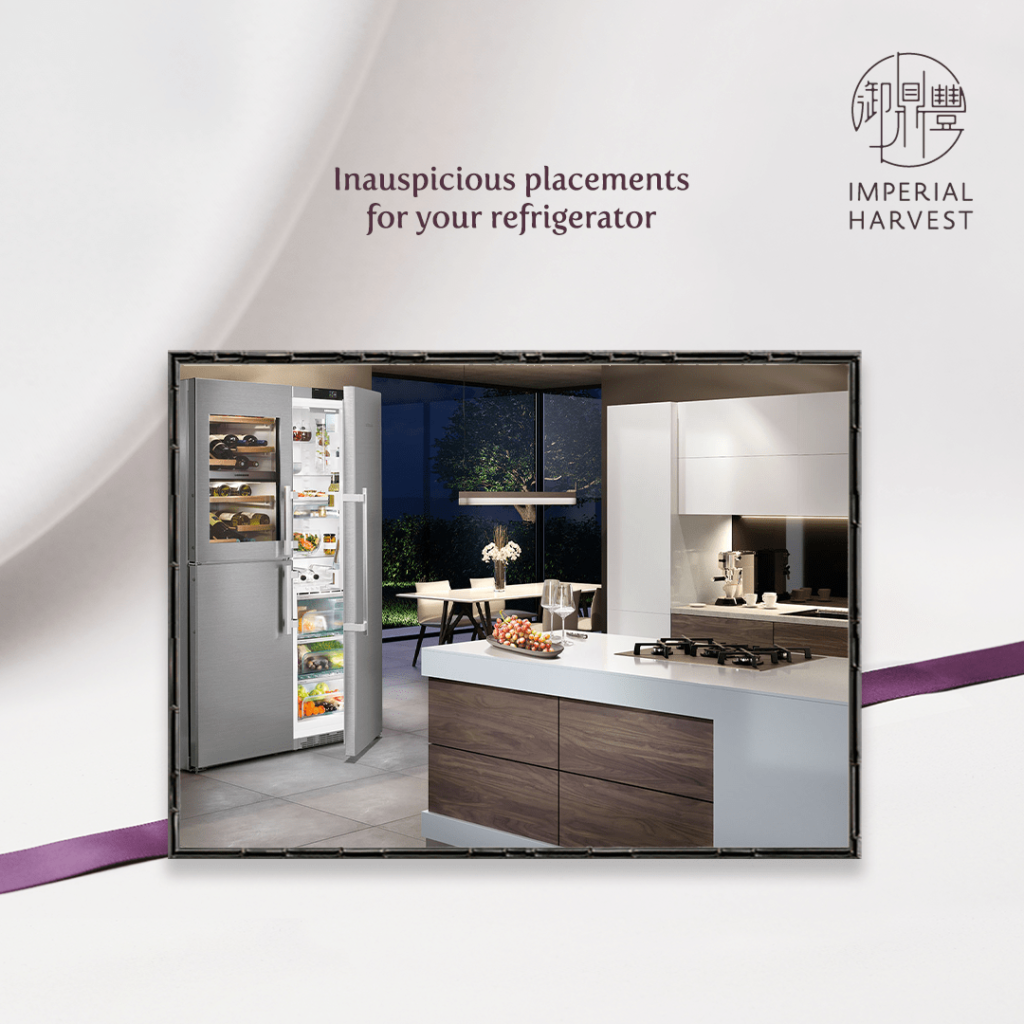 The refrigerator should ideally not face the stove either, as this clash of elements generates financial obstacles. To remedy this situation, place a green floor mat between the refrigerator and the stove.

Refrain from placing these items on the refrigerator 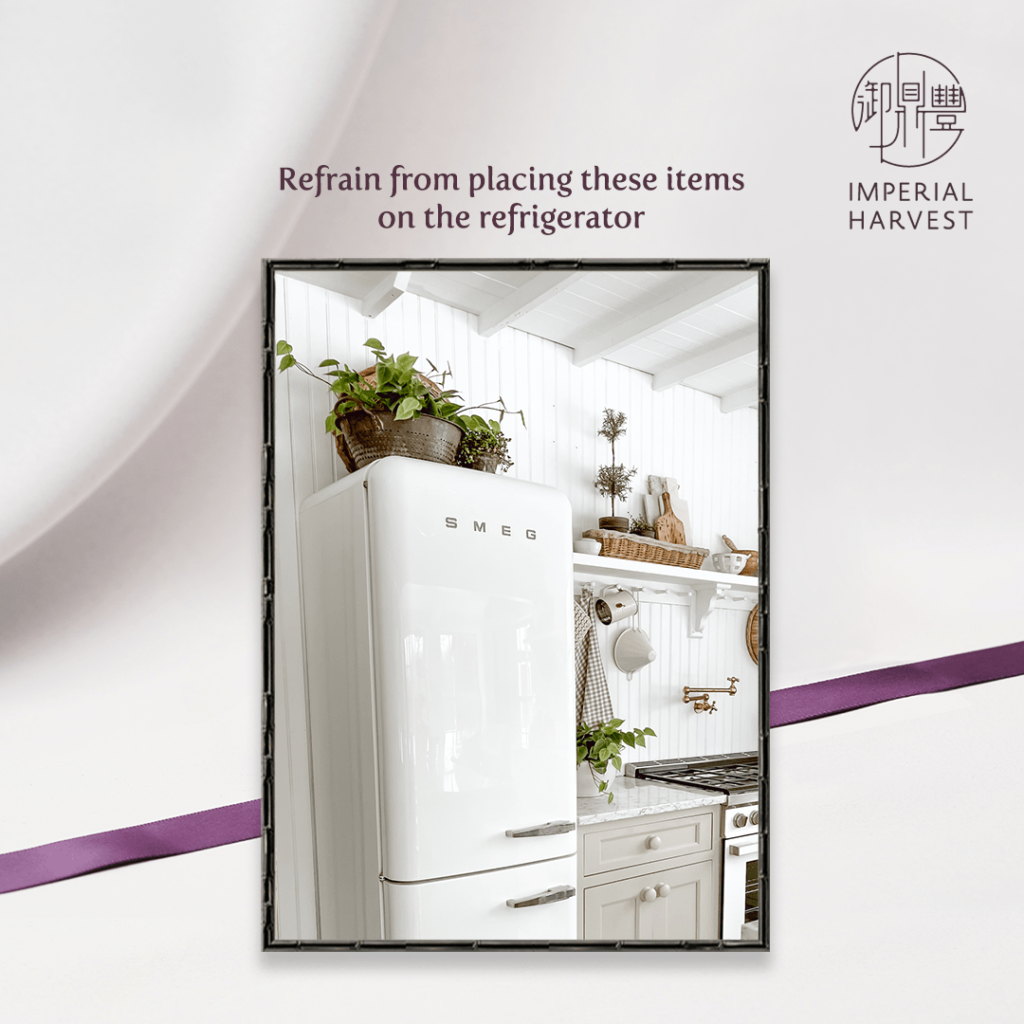 Although they make for aesthetically-pleasing decorations, it is inadvisable in Imperial Feng Shui to place green plants or decorations that correspond to the Wood element on top of your refrigerator. These decorations cause a Wood-Metal elemental clash, leading to leakage of wealth. In addition, placing anti-dust coverings on your refrigerator is also inadvisable as it limits the wealth storage of the household.

The refrigerator is a central part of any household, serving as a convenient place to display reminders or accomplishments. However, monthly bills should not be displayed there as this indicates monetary outflow.

Remove broken appliances from the kitchen 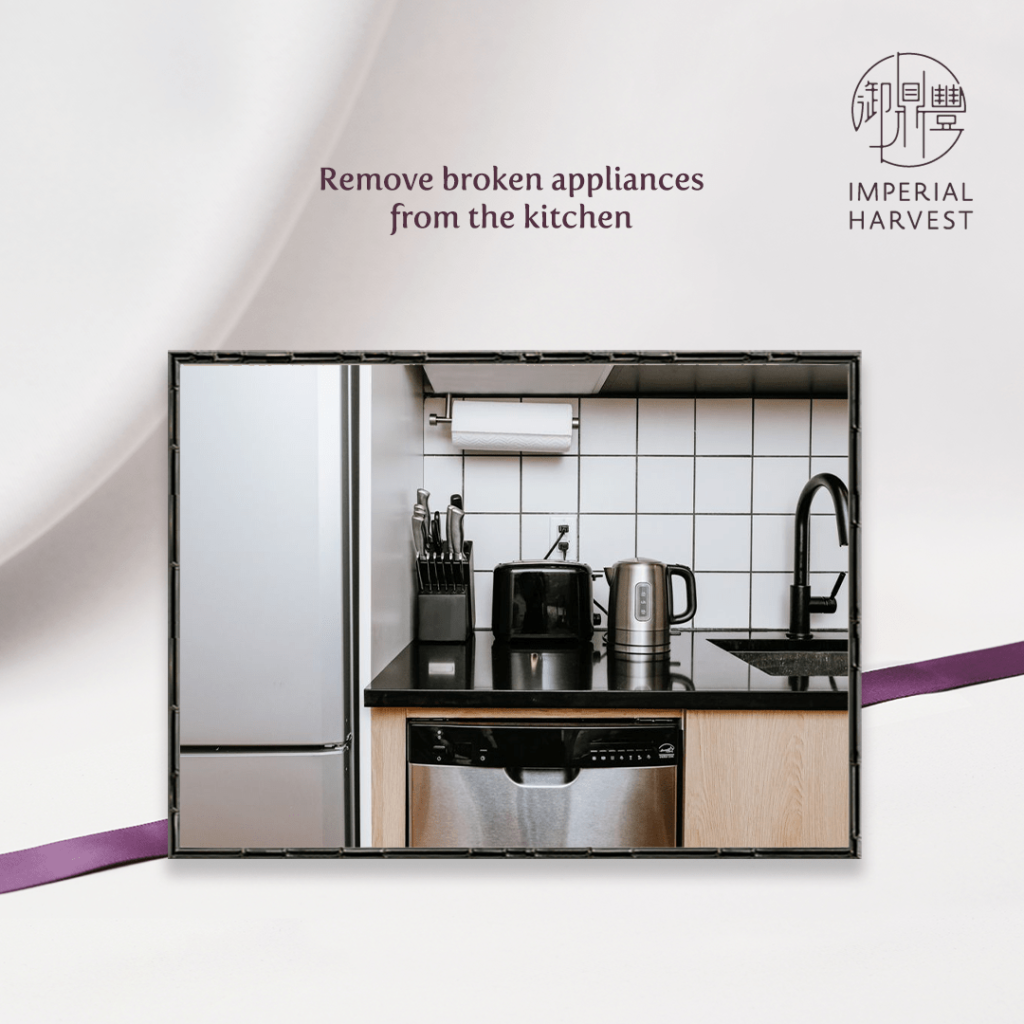 Broken kitchen appliances, such as a broken stove, rice cooker or oven, imply an inability to accumulate wealth. These appliances are tools meant to create food or wealth — therefore leaving broken appliances in the kitchen indicates that wealth creation in the household is weak.

Avoid floor-to-ceiling windows in the kitchen 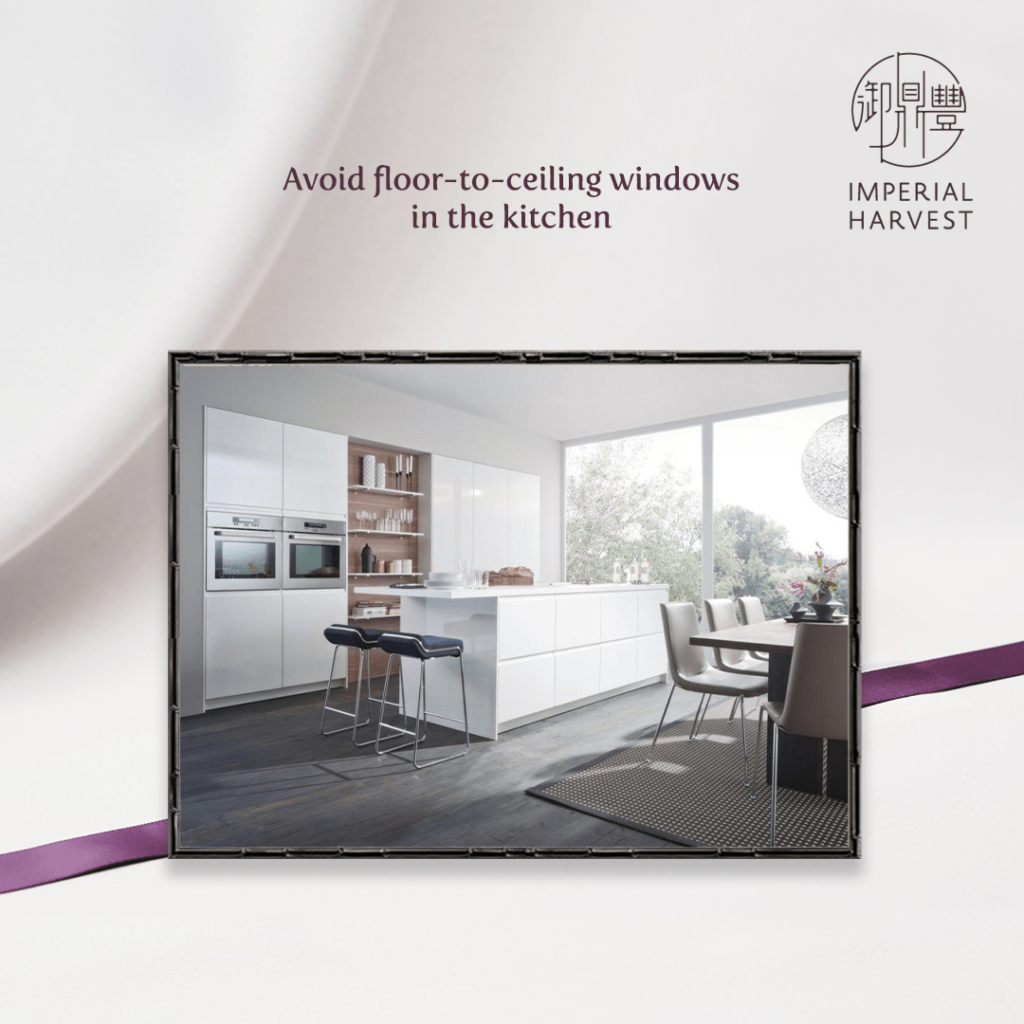 Today, homeowners find that apartments are gradually getting smaller. In yearning for a wider field of vision in their homes, they may opt to install floor-to-ceiling windows to allow for more natural light and to enlarge their space visually. However, such floor-to-ceiling windows have their Feng Shui associations, and require careful planning before installation.

Kitchens installed with floor-to-ceiling windows create excessive exposure to the household’s treasury and wealth storage, leading to a wealth of financial complications. As a result, the household’s occupants may experience an inability to accumulate any assets, and adverse health conditions such as gastrointestinal complications.

A key principle in Imperial Feng Shui classics, “Mountains govern benefactors, authority and harmony while water governs wealth” (山管人丁，水管财)” dictates the importance of activating the wealth and benefactor sectors of your home in the pursuit of success and prosperity. Often, contemporary homes overlook the importance of these sectors, resulting in missing sectors that adversely affect the household’s occupants. 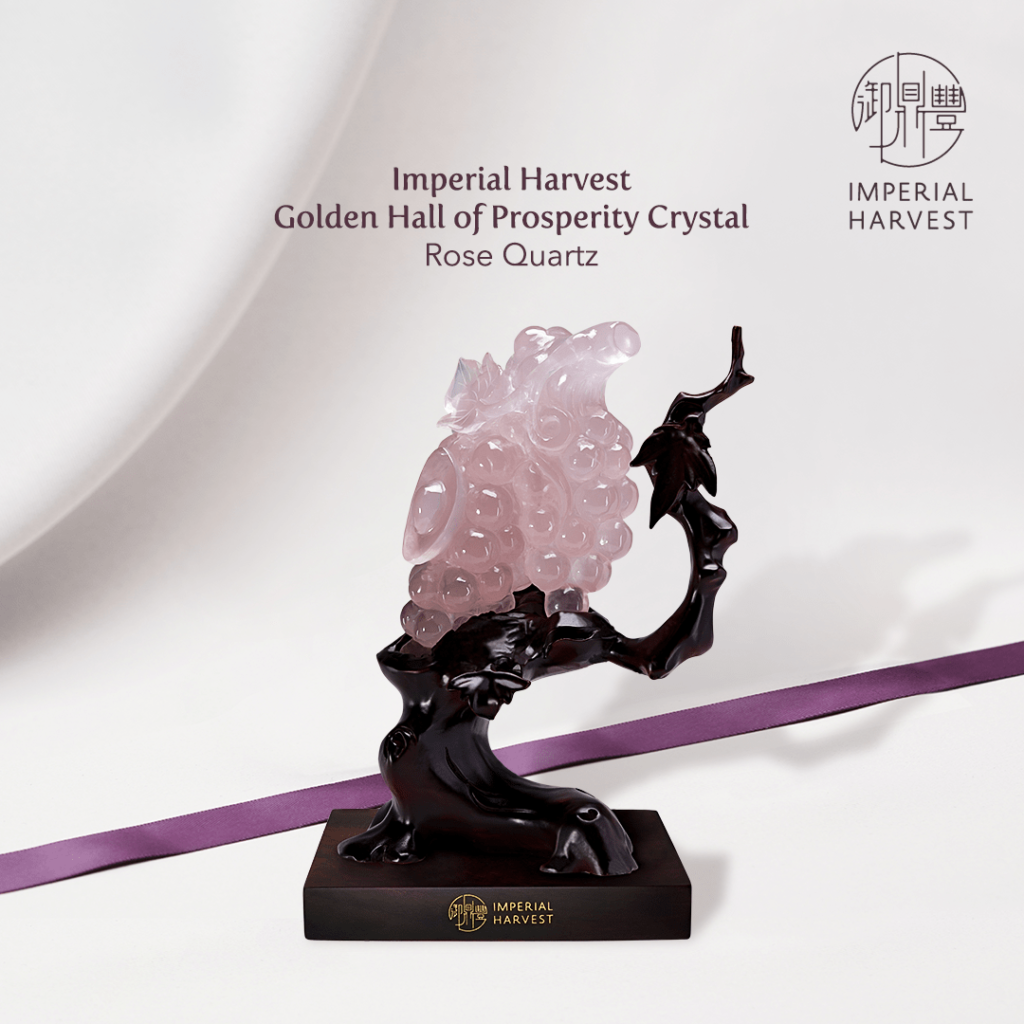 Activating the water star plays a pivotal role in the pursuit of abundance and prosperity.

The water star, also known as the wealth star, has aided the wealth accumulation of numerous clients of Imperial Harvest, attracting strategic opportunities and further strengthening their unlimited potential.

The esteemed Imperial Feng Shui masters of the Qing imperial dynasty had discerned the importance of activating the water star, and unveiled the abilities that Imperial Harvest-grade crystals held. Emperor Qian Long’s advocacy for such crystals catalysed the Qing Dynasty’s rise as one of China’s most prominent golden ages.

Based on the principles of Imperial Feng Shui, Imperial Harvest-grade natural crystals are deployed to activate the water star in the living and working spaces of our clients, promoting the flow of wealth within the property. Imperial Harvest’s Crystal collections are a contemporary reimagination of the same Imperial Feng Shui traditions that flourished under Emperor Qian Long’s rule, yielding great prosperity when properly installed. 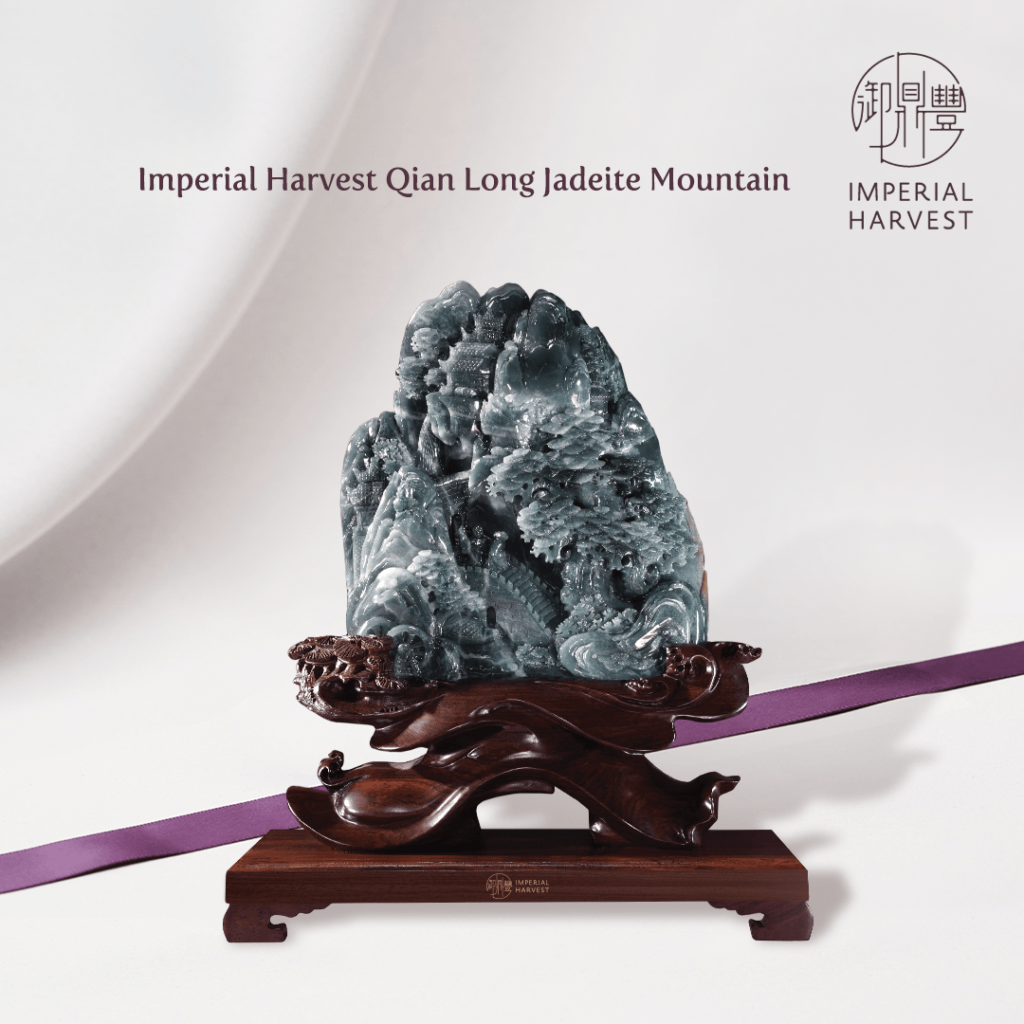 A common concern amongst Imperial Harvest’s family of clients, who may experience setbacks due to a lack of benefactor support in their lives or careers. Activating the benefactor sector in your home proves crucial in your pursuit of success, with its presence ushering strategic opportunities to bring you closer to achieving your goals.

Mountains are considered powerful symbols in Imperial Feng Shui, being stable and immovable. They represent powerful and influential benefactor support, and its power is harnessed by activating the mountain star. 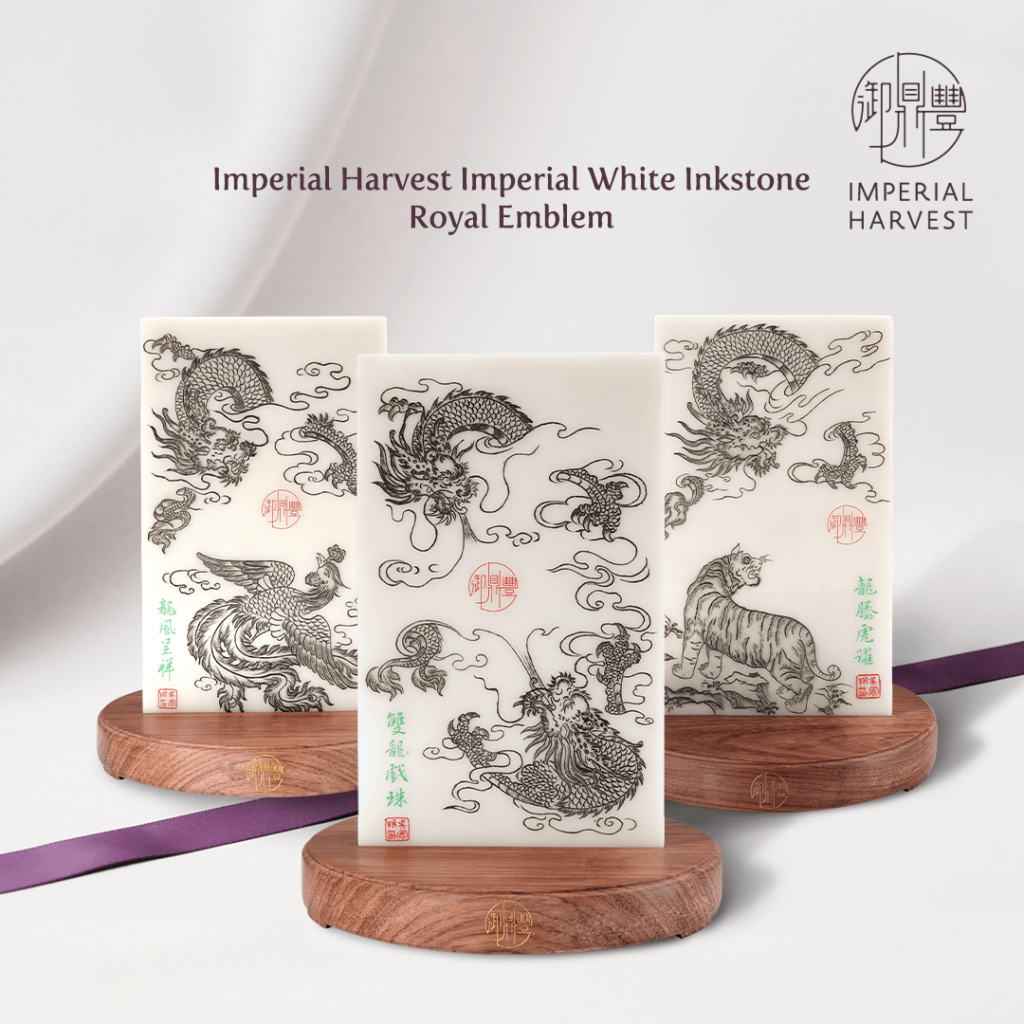 A versatile and powerful Imperial Feng Shui treasure that activates the authority star and promotes benefactor support, the Imperial Harvest Imperial White Inkstone is an effective solution in countering any problems that arise from missing sectors in your home, and negates inauspicious energies.

Emperor Qian Long advocated the use of inkstones in his duties as regnant and saw these stones as an important instrument that empowered him to make inspired decisions. Through these innovative decisions, Emperor Qian Long was able to lead the Qing Dynasty to inimitable success.

Similarly, the Imperial Harvest Imperial White Inkstones bring the key aspects of important deliverables to the forefront, allowing their destined owners to arrive at decisions that best benefit their business dealings and bring them growth and prosperity.

History and Heritage of the Imperial White Inkstone