Posted by Imperial Harvest on 09 September 2022 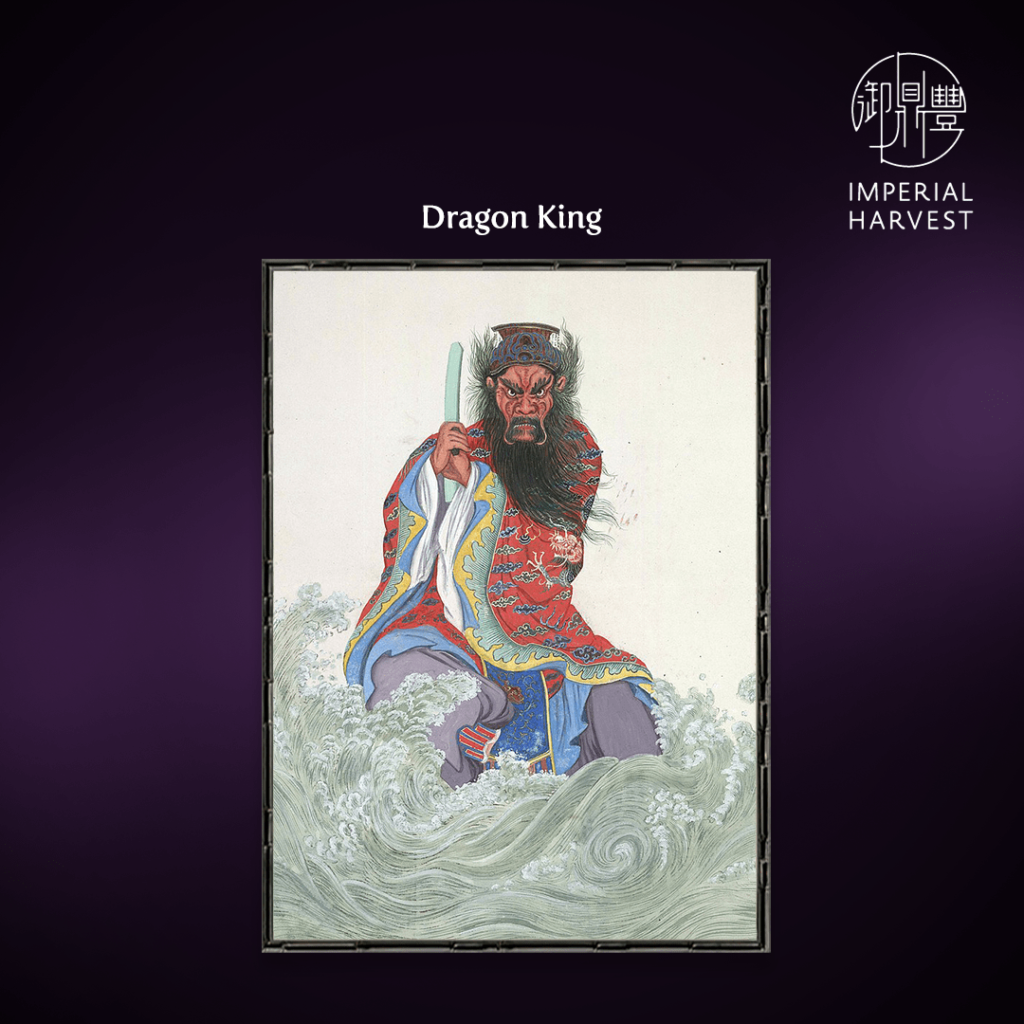 According to legend, the Dragon King was held in high regard amongst the Chinese pantheon, taking instruction solely from the Jade Emperor. The ancient Chinese worshipped him as the Dragon God, believing him to be the symbolic ancestor of all early Chinese emperors — a basis for their titles as the sons of heaven.

The Dragon King’s abilities to control weather and water were greatly respected by the varied agricultural communities across Chinese dynastic history. For these farmers, their very livelihoods depended on favourable weather and safety from natural disasters, such as floods and monsoons.

Today, the Dragon King is celebrated throughout China, particularly worshipped during his birthday on the 13th day of the sixth lunar month, traditionally through festive processions and dragon boat regattas.

The importance of indirect wealth (偏财库)

As a leading authority in Imperial Feng Shui, Imperial Harvest holds the findings of Qing Imperial Feng Shui masters at its core. According to the Imperial Feng Shui principles discerned by these eminent masters, Imperial Harvest-grade sandalwood held unrivalled abilities in enhancing its destined owner’s indirect wealth capacity (偏财库). Indirect wealth capacity encompasses the lifetime income potential an individual is able to derive from secondary, ad-hoc or supplementary sources of income. For many, these sources could include stocks, investments, trading and even lottery winnings. Such returns are also referred to as windfall wealth, and individuals with enhanced indirect wealth capacities are able to experience consistent growth and stability even throughout turbulent financial situations.

On the other hand, those with limited indirect wealth capacities may experience detrimental implications, such as fluctuations in their investments, or missing out on opportunities that may help further their wealth aspirations. Enhancing indirect wealth is, therefore, a strong proponent of a well-rounded pursuit of wealth and prosperity.

Imperial Harvest derives its sandalwood from India Old Mountain sandalwood, a premium variety highly sought-after for its impressive fragrance, rich hues and understated elegance. Native to the deep forests of South India, this variety of sandalwood has a long and celebrated history, coveted by Feng Shui connoisseurs for their formidable wealth-enhancing properties. 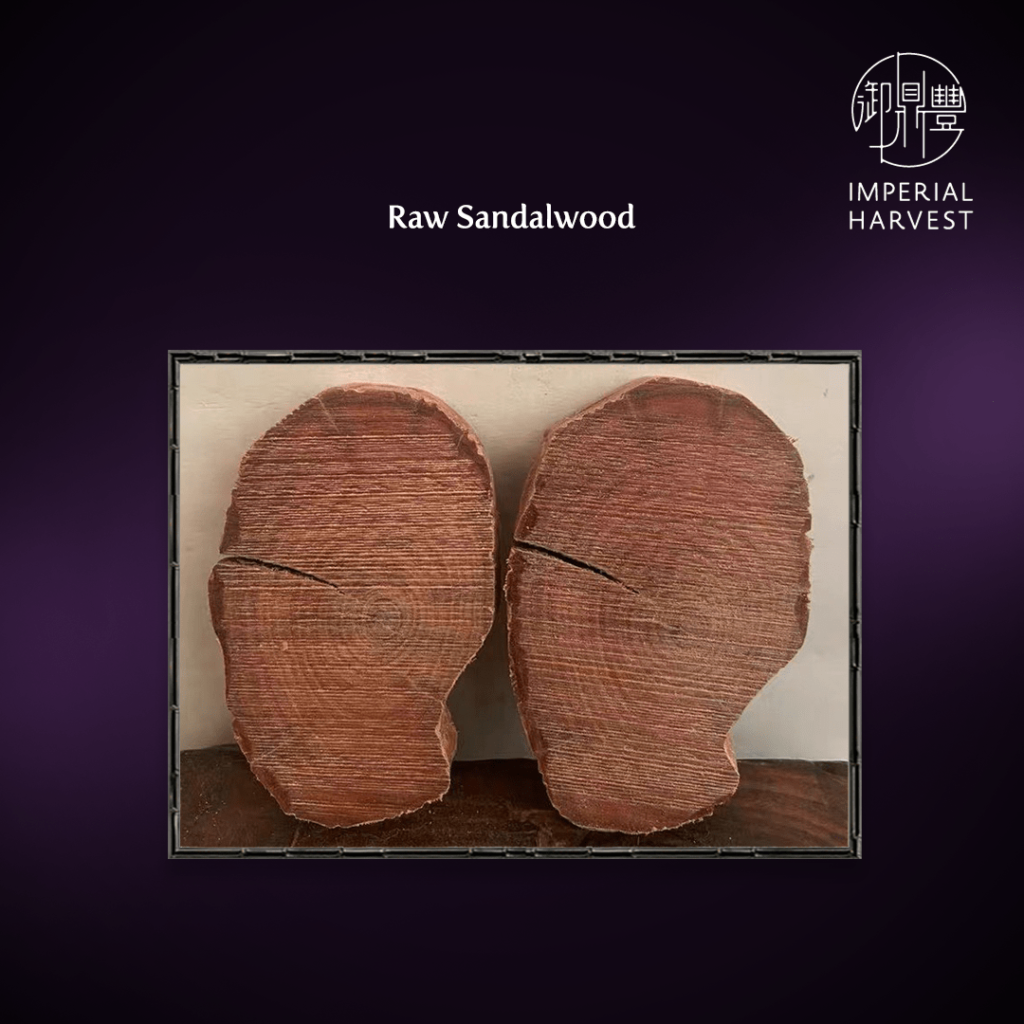 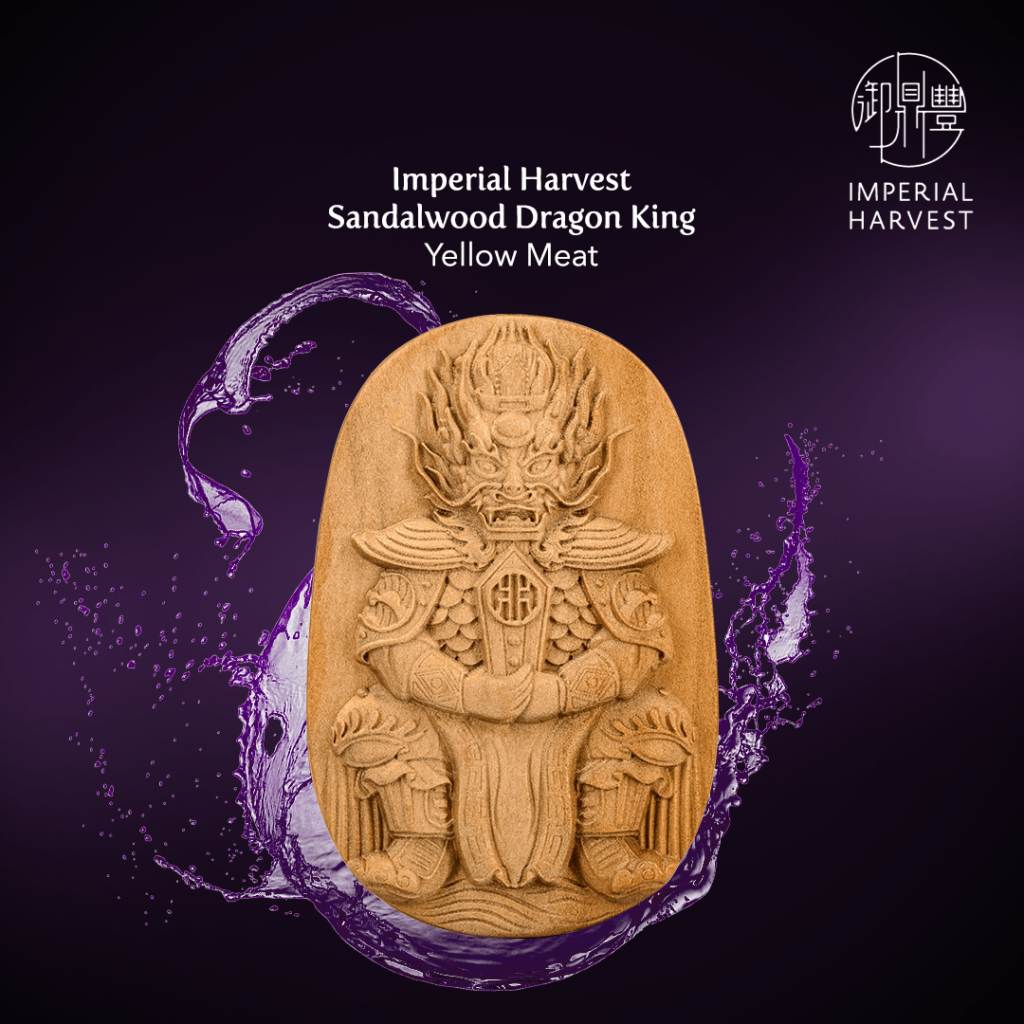 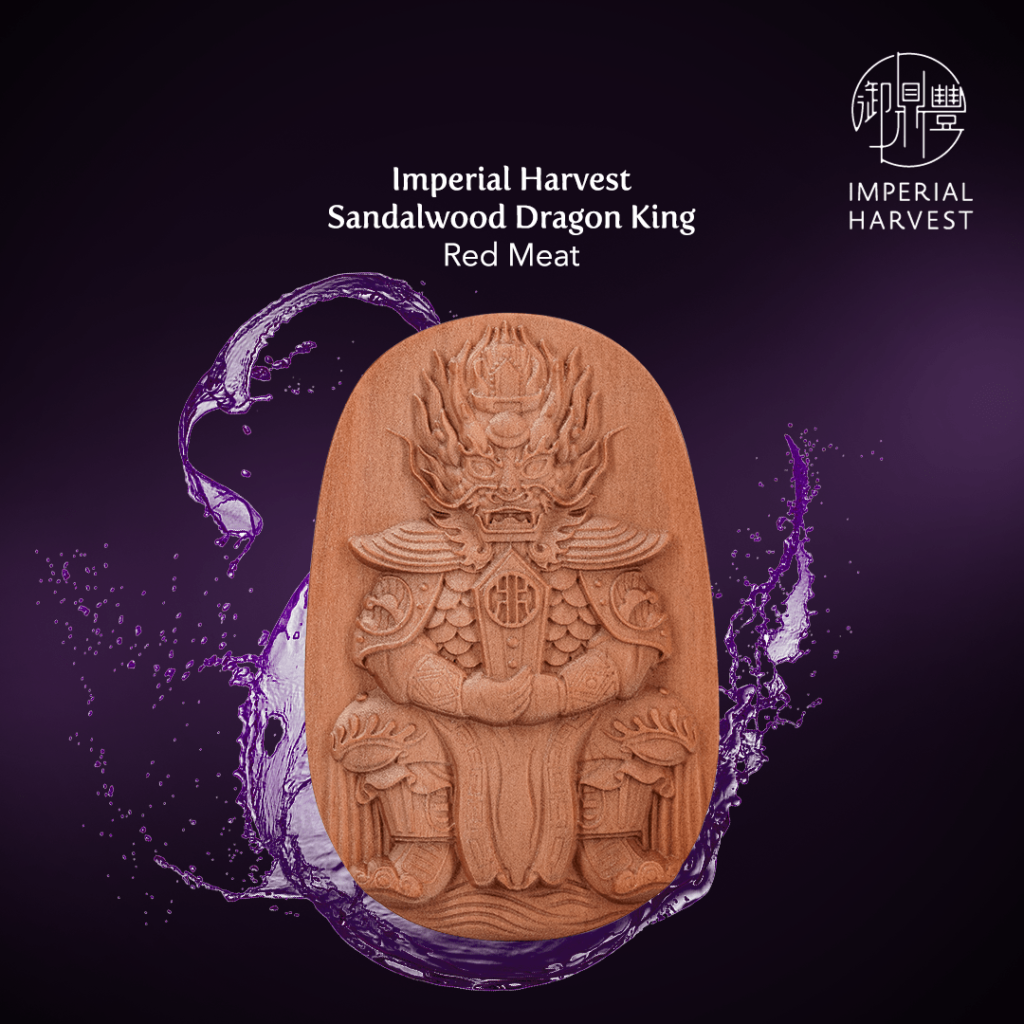 The second-most tier of India Old Mountain Sandalwood available at Imperial Harvest, Red Meat Sandalwood emanates a gentle and comforting fragrance. This variation of sandalwood undertakes an ageing process spanning up to 30 years, which results in the formation of its signature reddish-hued resin with tones of black. 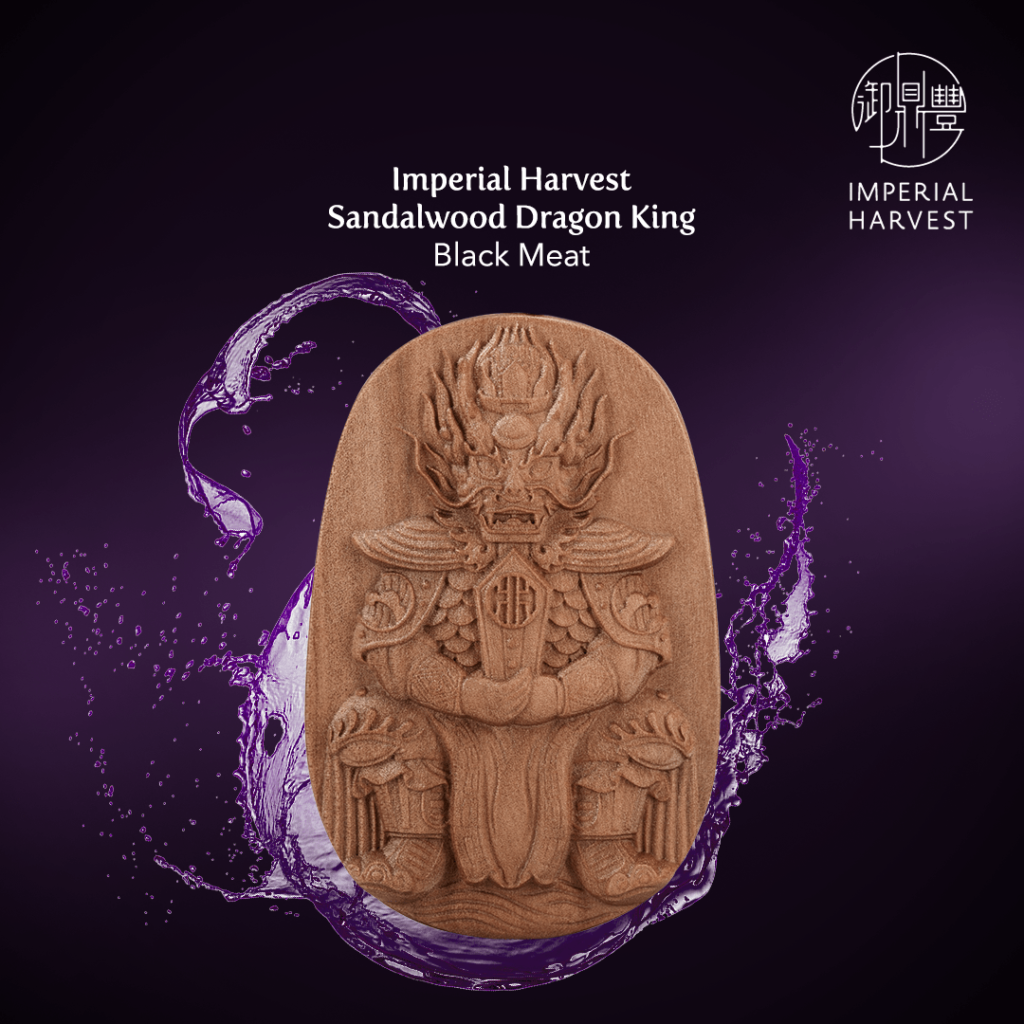 Crown of the Four Seas 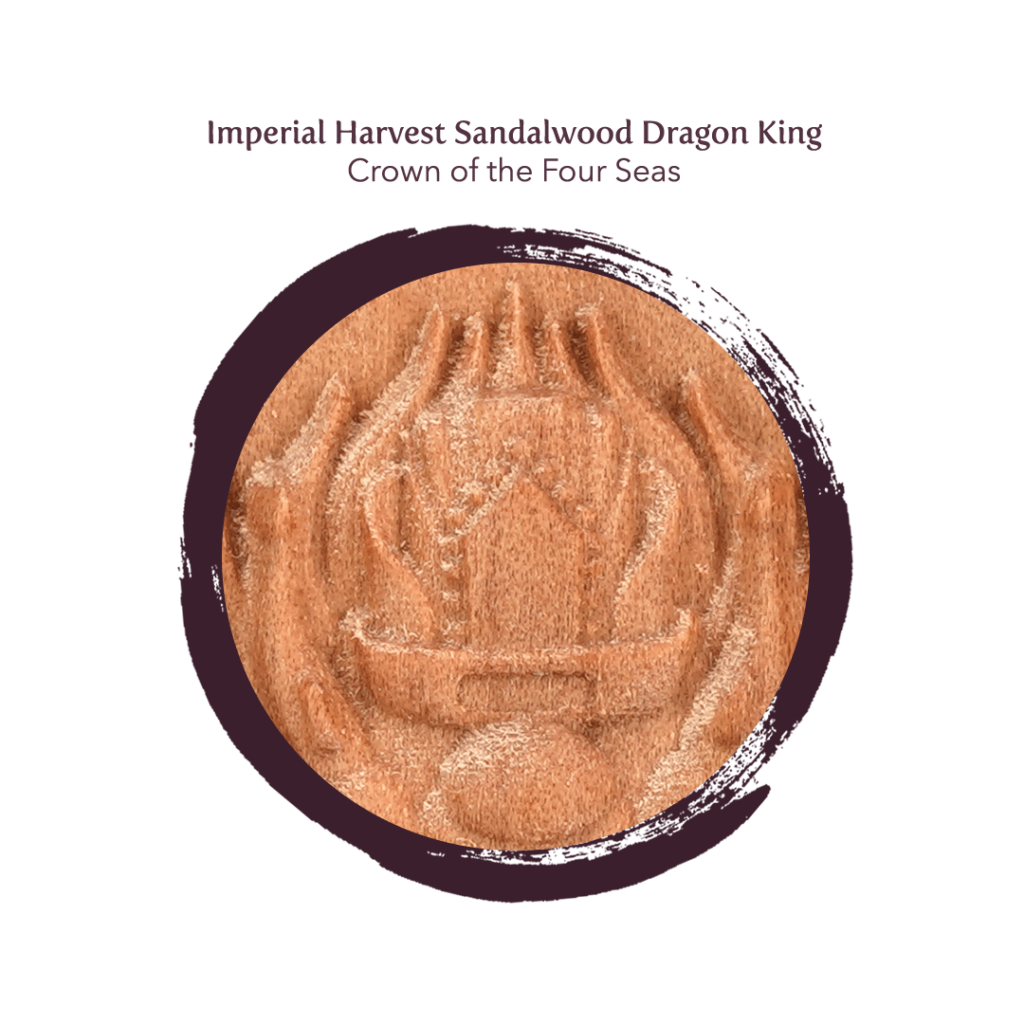 The Dragon King dons the Crown of Four Seas — a symbol of his omnipotence and ability to govern every direction. This emblem of prosperity similarly bestows its destined owner to usher in wealth and success from all directions, forging forward to achieve their greatest goals and aspirations. 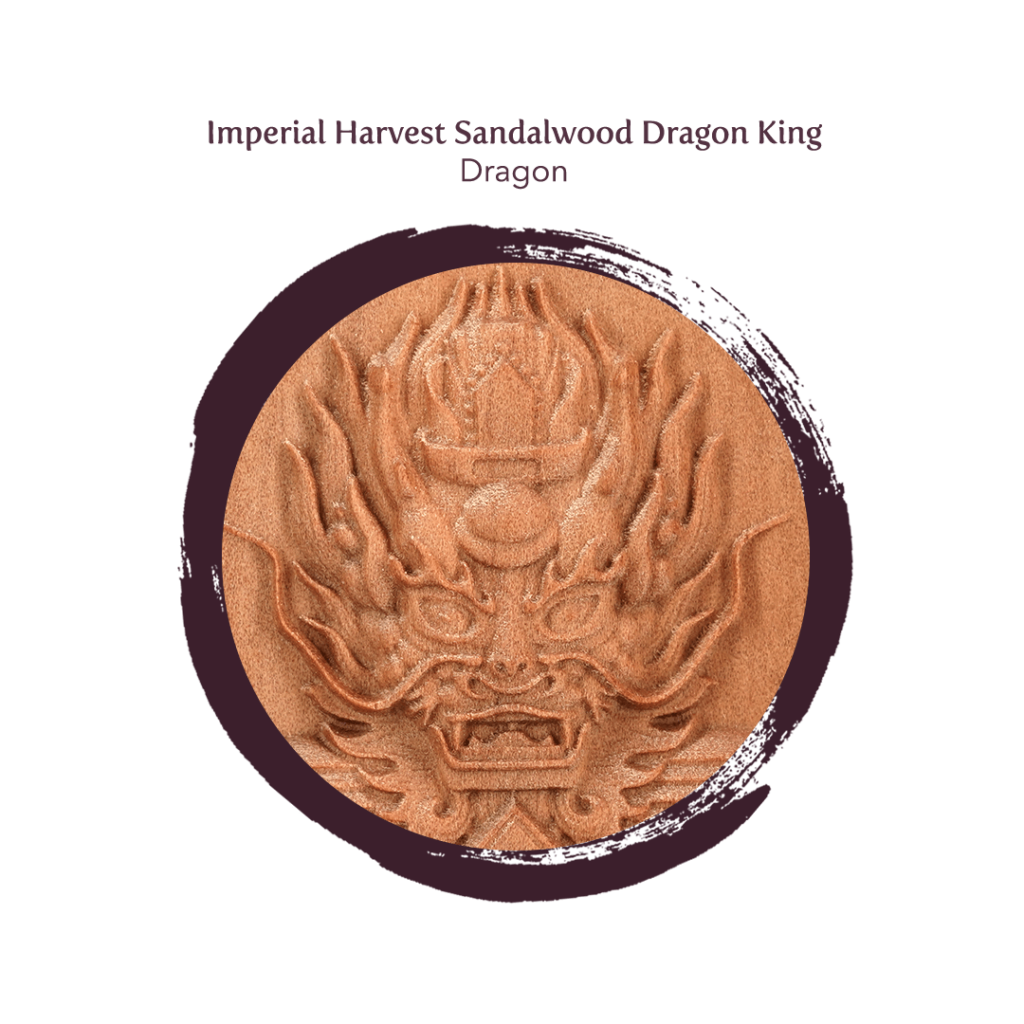 The Dragon King was known to assume two main forms: a ferocious majestic dragon, and the human persona of a warrior lord. The Imperial Harvest Sandalwood Dragon King melds these forms, depicting the Dragon King in his zoomorphic form, donning elaborate regalia.

The imposing dragon is one of the most powerful and divine creatures found in Chinese mythology, an auspicious emblem of success, abundance and good fortune. Motifs of dragons have long since adorned the hallowed halls and architecture of the imperial palace, in reference to its heavenly stature. Prominently embroidered, painted and featured on the personal belongings of Chinese emperors, dragons are synonymous with imperial authority and power, and only emphasise the emperor’s status as the Son of Heaven. 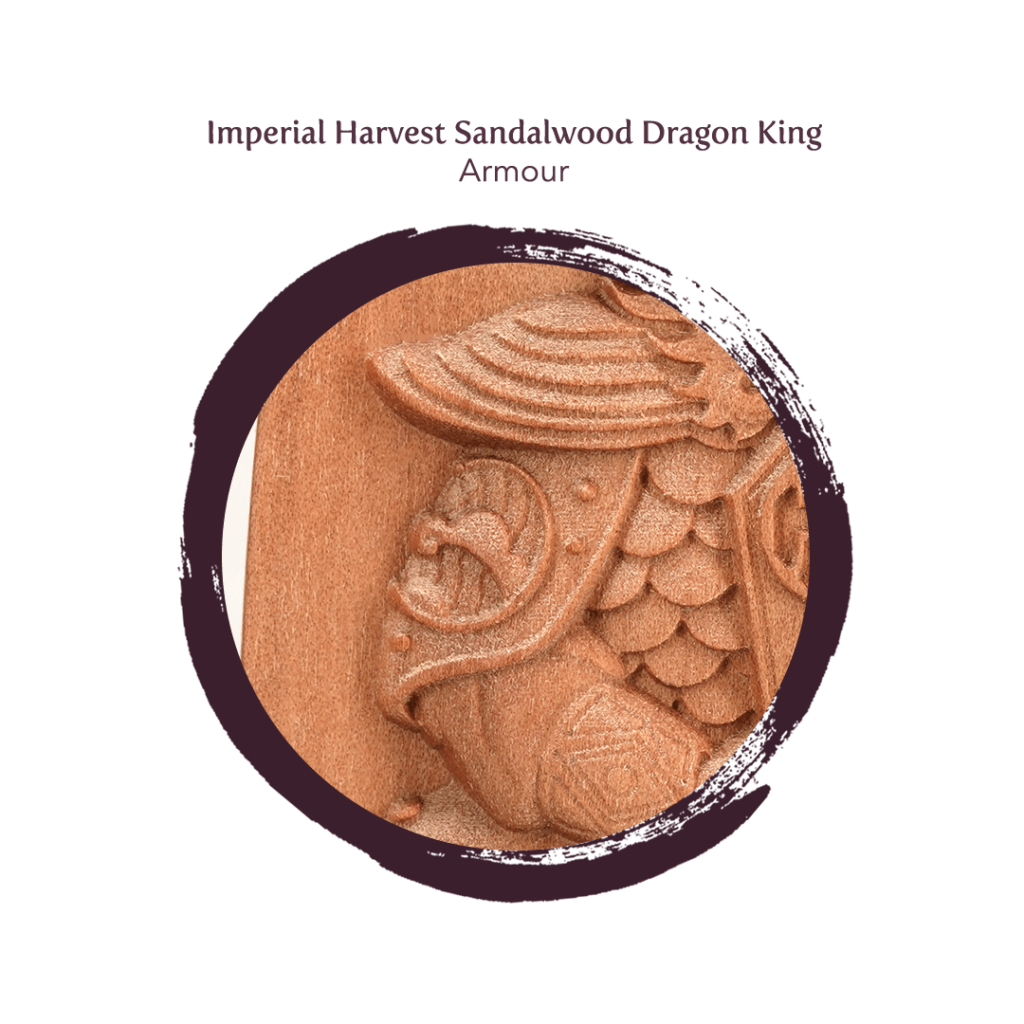 As a powerful weather and water deity, the Dragon King is depicted with an elaborate set of armour featuring waves and water-elemental motifs. “山管人丁，水管财”, a well-cited Imperial Feng Shui principle dictates that “mountains govern benefactors, while water governs wealth”. The auspicious presence of water ushers in waves of prosperity and wealth for its blessed owner, suggesting smooth success in their personal and career pursuits. 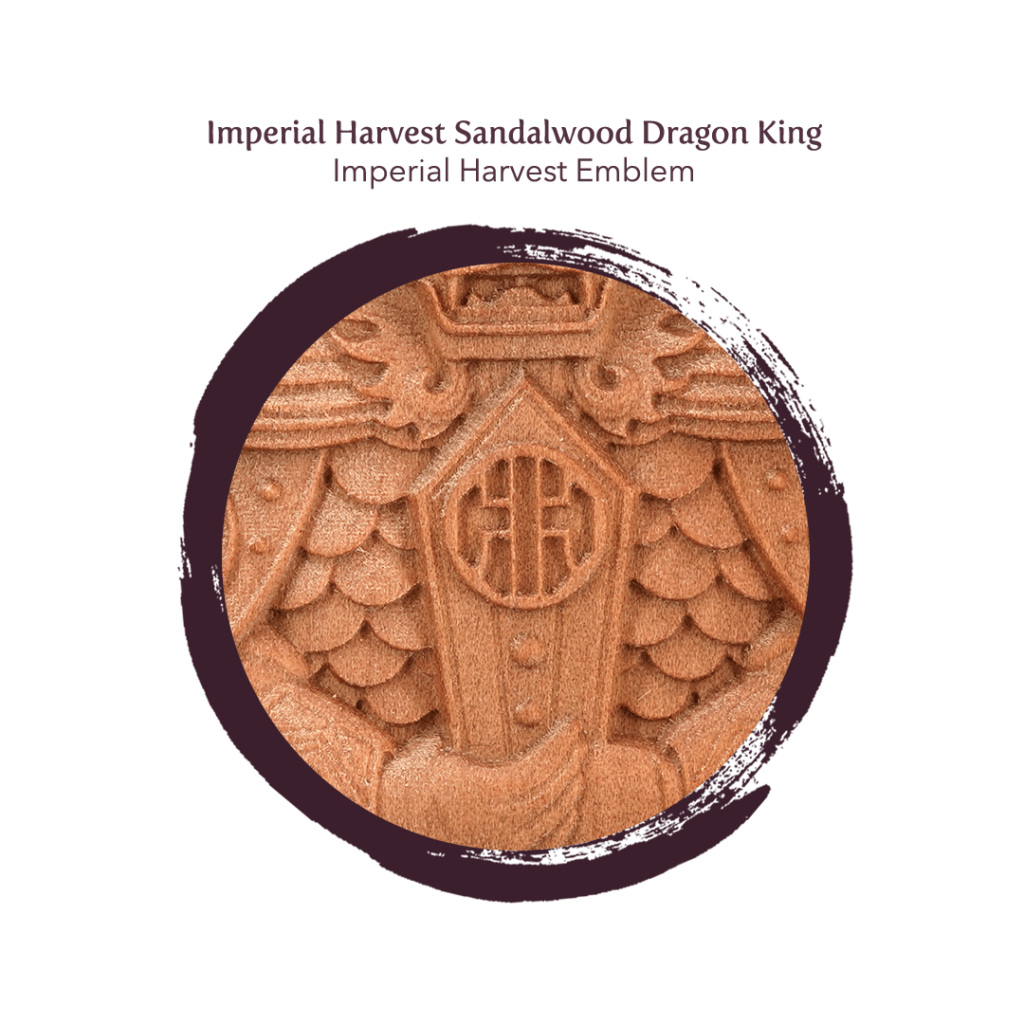 Prominently emblazoned on the token of authority (令牌) held by the Dragon King is the Imperial Harvest Emblem, an exquisite mark of excellence that epitomises the brand’s ethos of quality and perfection.

The Imperial Harvest Emblem features a stylised rendition of the Chinese character “鼎”, referencing the prestige of ceremonial Ding cauldrons — bridging the connection between traditional principles and contemporary aesthetics. This centrepiece of the Imperial Harvest Sandalwood Dragon King endows its blessed owner with everlasting prosperity and the omnipotence of imperial Feng Shui, while affirming the legitimacy of this treasure as part of a distinctive lineup in Imperial Harvest’s suite of treasures.

Conceptualised and designed in Singapore, this limited collection features unique serial numbers, along with Imperial Harvest’s seal — encompassing a relentless pursuit of design excellence, technical perfection and a commitment towards delivering only the finest in Imperial Feng Shui solutions and treasures.

Decoding the science of getting rich – Part 1: Wealth Capacity

Decoding the science of getting rich – Part 5: Wealth Capacity Implications